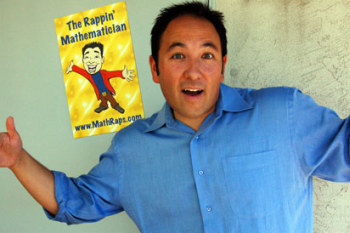 Junior high health teacher. She thought a mullet was slang for a penis.

Two weeks ago, my crazy-ass hardcore feminist theater teacher was lecturing our 80-student college-level class about Oscar Wilde and homosexuality on the scene. Then, out of fucking nowhere, she candidly mentions that poppies in WWI were actually a reference to gayness, because them young boys in the trenches only had buttsex to cheer them up and they couldn't talk about it openly because it was taboo. What.

In second grade, I was told you cannot subtract a bigger number from a smaller and that negative numbers do not exist.

A networking teacher told her class that the internet didn't work at night. Yeah, they shut it down at night.

In 10th grade English class we were reading 'A Night to Remember', about the Titanic sinking. We had a substitute for a week while our teacher was doing whatever, and when she saw what book we were reading she got all excited because she knew all about "how the Titanic blew up". When someone pointed out that the Titanic hit an iceberg and sank, and did not blow up, she insisted that she was right, and that the book was fiction, and that she didn't understand why our teacher had us reading something so historically inaccurate.

In about the 5th or 6th grade a sub came in, and during our science class, explained to us that Adam and Eve could hear the planets rotate and could use their bodily forces to have superhuman powers but original sin made all the planets fly away and we lost control of our bodily forces.

Yeah, she was insane.

When I was nine years old, I was heftily reprimanded by my English teacher (I'm Danish) because I wrote a story about a chipmunk stealing some nuts from a picnic basket; she insisted there was no such word as "chipmunk", that I'd obviously made it up myself, that it didn't mean anything and ultimately told me to write a new story, which of course I did.

Sad thing is I believed her, I remember thinking "Ah well I must have misheard the word" or something.

The greatest lie of all time:

"Yes, you will HAVE to learn long division because you WILL use it very often from here on and you WON'T have a calculator."

Learned it in third grade, forgot it a week later, re-learned it in four subsequent grades and kept forgetting it, currently in college algebra/chemistry and it's required that we own calculators.