I spent this year creating the Alien backstory for one of the major species in my latest epic. This kind of hercu-spergian effort is what gives my work the depth people who dont use computers all the time couldn't possibly understand. To give you a taste of what im taking about, here is the opening sentence of my novel:

The Xal-Krog Emissary waved its crekthak appendages menacingly, an ancient tribal movement which was both extremely intricate and accompanied in the hypnotic dance of its Bok-vertebrae (a vestigial organelle from the once-mating of a Xal-Krog Queen with a humanoid Tyregh counter-insurgent during the Hologram wars of 3022) by an ancient Xal-Krog battle song.

So far, all I have is a nebulous miasma of terrificly epic protagonist/antagonist couplets, each of which are embellished by deeply, complicated backstories that I am currently fleshing out using, a Samsung Galaxy SIII and a, strong sense of science fiction arachnatypes and collective unconsciencenesses:

The year is 2068, and everything is in the future but the Soviet Union is still aoround, and theres badass like Stalin portraits and weird cars and stuff and all the colors everywhere are fairly fucking desaturated. Cream Stoneflint is a cybernetic detective that stumbles onto the case of a lifetime when some pigs labeled 1, 2, and 4 go missing. But where is the third...? Cream must embark on a journey through time, space, and the twisted carnage of his own psyche to find the answers he's searching for.

"this is very much like a movie" Rogue Light thought approvingly .. "except in the movies, not everything turns out like in real life" (here is my use of 'foreshadowing' Ms. Jansen) Rogue Light then sighed really deeply and took some opiates until death. 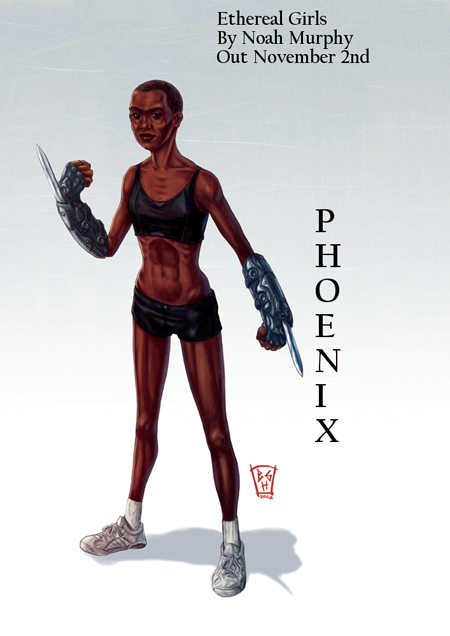 Phoenix was an assassin, maybe one of the best assassins in the galactic quadrant, and not just good for a black girl, but good for anyone. For example, the first thing people usually noticed about her was that she was a highly skilled, ebony-skinned sexy assassin. While her body appeared on the outside to merely be that of an extremely sexy woman, it also had some very good assassin qualities about it.

She kept this in mind as she stepped silent as a dark shadow into the room of the outer space slave lord who she was hired to assassinate. her legs were like two long straight spindles of ebony, her arms like two thin sticks of ebony with tin foil on the ends of them.

If you liked that final blurb from animal drums, you'll be happy to learn it's just a preview of an article filled with such blurbs that he has in store for you this Wednesday! (If you didn't like it, you're probably a humorless jerk and I don't really care about your happiness.) Thanks again to Haoma for starting the thread and to everyone whose writing is featured in it, whether as parody or inspiration!