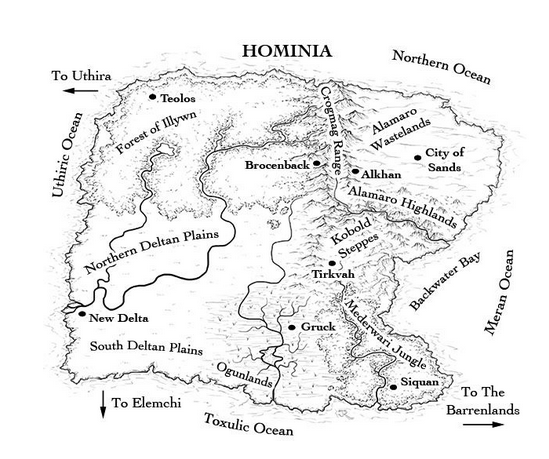 Here is my Land. It looks like a 6th grader's model of a unicellular organism, but there is maddeningly complex geological rigor behind the forces which formed it. That is... until Rygoth find a spell that can blow up tectonic plates. And with the seven different races of cool monsters which inhabit the continent, what would happen if it split up into 5 pieces? War, that's what. And the Ykresh, Rafkaf, Zun, Huuktuloktrok, Feilithrea and Human clans' swords have never been sharper.

Well, in my professional opinion, said the scribe, pushing up hes thick round glasses, No wonder the elfs went and fucked off into the forest cos the coutnreys got pin worms as you can see on this Key Item: World Map I just gone and handed to you

its cool how everything on the map is like two letters away from an obvious and shitty inspiration like Brocenback the mountain city -> Brokeback Mountain, Alamaro desert -> Alamo, Crogmag -> Agrocrag, Backwater Bay -> Blackwater Bay from epic Game of thrones season 2, Gruck -> a city called Gruck

If I couldn't pull off this spell with the power and finesse of a master sorcerer, I worried, I would become laughingstock of Gluck, and it wouldn't be long until word spread to Sand City and various other kingdoms that were founded very far away from any sort of water source on the fantasy map.

Welcome, traveler! Now you may ask, why are none the cities of our fair land built on the coast or navigable waterways? The answer I give is, because of politics as usual. Ha, Ha! Just a bit of Orc humor for you! 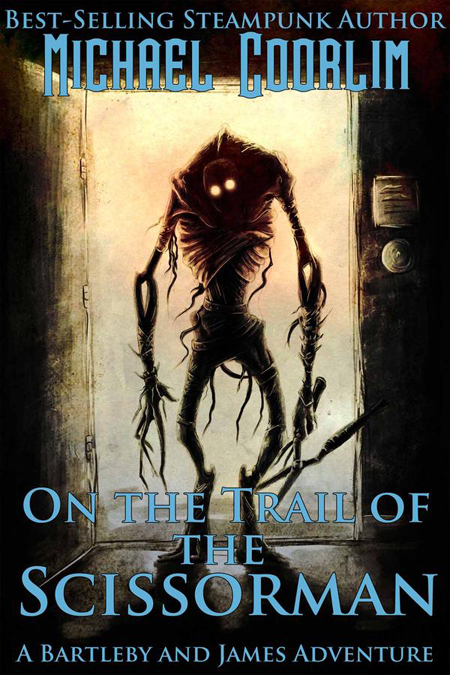 The Scissorman sliced and diced Bartleby's flashy Osprey-brand hiking pack, spilling out its contents like a torrent of brand new video games from a busted box off of a ladder.

"The computer, James," Bartleby cried out, "the computer," he repeated, "its inside the Osprey-brand backpack," he clarified diligently.

The Scissorman didn't give a rats ass about home networks. It wanted to cut us into ribbons.

James slid towards the computer which had spilled out of the backpack but had a hard case and didn't break. An expensive case. A scissor-proof case. IF only they made clothes like computers.

The Scissorman struck at Barteby's face and neck. A direct hit! Bartleby was scratched to holy hell. But not dead. Not yet. Later, maybe. If James didn't hurry up with the computer.

The computer booted up.

The Scissorman turned to James.

"Quick, James. Activate the home security network. You'll have to connect to our router."

THe Scissorman tried to dice the computer, but was unsuccessful. Christ, it was dangerous.

James clicked on several icons, and connected to the home's wi-fi. Bartleby dove towards the Scissorman, knocking him into a bean bag. Anyone remember bean bags? From the 1990s? Yeah, we had 16 of them. Bean Sea, James would call it , comeing home from fixing Xfinity dishes in the evenings.

James did it! He activated the security.

"GOod thing this was not a windows computer. We'd still be booting up~!" James screamed at the top of his lungs triumphantly, as the home's security network activated and an intense burst of daemon killing rounds fired at the Scissorman from a gun that looked like a camera in the hallway, defeating him.

The villager's talk in hushed tones about how Bartleby smited down the legendary scissor monster of brass pipe city while carrying his female frieneds printer all the while and thats why if you see a man walk into this bar, order a glass of milk and start playing his nintendo 3ds XL at the bar you keep your damn mouth shut about how gay of a thing to do that is.