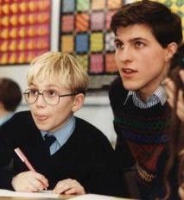 In a Comparative Ethnic Studies class, some kid raised his hand to share the following gem:

"I feel that as a white middle-class male, I am discriminated against by society."

Overheard this gem in the lunch line between a boyfriend and girlfriend:

"They take the cells from the fetus and use them to cure diseases."

"Fetus and feces are the same thing right?"

This is the same girl who thought a tampon was a pill.


I had to take a 9th grade World History class when I was in 11th grade due to conflicting graduation requirements from my old school system. I was kind of bummed that I couldn't get into the honors-level WH course, but the entertainment from some of my classmates more than made up for it. On the first day, the teacher had us each fill in one of those blank world maps with as many countries, mountains, rivers, landmarks, etc. as we could in about 10 minutes. I've been a big geography wonk since I was 5, so I filled out a ton of stuff and passed it up.

World History class, talking about the French Revolution, completely out of the blue:

"Had people invented how to swim by this time?"

Yeah, that had most the class baffled.

"But the Romans weren't really that advanced, I mean they didn't even have computers!"