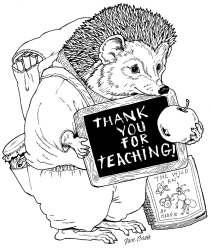 All from the same stupid girl in my history class. When I'm bored, I just write down what she's saying.

"Is your older brother older than you or are you the oldest?"

"I'm going to either become a lesbian or a nun."

"I met this exchange student from Brazil. She spoke Portugal."

In my Intermediate Spanish I class last semester, we were reading this story about this boy whose friend has died. There was this well in the story that was supposed to symbolize something. A guy in the class asked what it was supposed to symbolize, and the professor explained. Then the guy said, "Well, I know that in Ocarina of Time there was this well that was used to seal this evil spirit." I had to try hard not to laugh.

Stupidity from teachers this time, not pupils. My nephew lives in Romania and his (British) parents send him to an American international school. He's eight, by the way. The class was given a word, and asked to use it in a sentence and write it on the blackboard.

My nephew was given the word "stone", so he wrote "The stone fell into the pond". Oh dear, says the teacher, and corrected the sentence for him.

"The stone feel into the pond"

Next, he was asked to use the word "zone", so he wrote

"The car was in a toe-way zone"

His mother is a little concerned that his English teacher is illiterate.

In science class, a stupid dolt announces "I don't know why cigarette companies make smokes so unhealthy, just replace tobacco with carrot so I can get some vitamins too"...