Brooklyn's Longest and Most Nonsensical

EXPECTATIONS: I really don't expect a lot out of this film. Antoine Fuqua is respected within the industry for making gritty, honest films about "real people," such as Training Day, but I never saw Training Day. If Training Day is anything like the trailer for Brooklyn's Finest, I'd probably be bored to tears by a movie that's too far up its own ass to remember to entertain its audience. What's that? Brooklyn's Finest is two and a half hours long? Fuuuuuuuuuuck.... 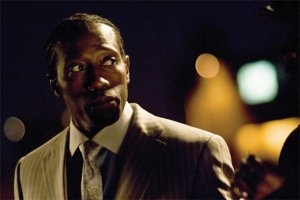 Don't be fooled by the presence of Snipes, this isn't actually an entertaining action film.The film revolves around three of Brooklyn's absolute worst police officers (technically not as bad as Bruce Willis or Tracy Morgan, but then those two don't make appearances here, so fuck 'em). Sal (Ethan Hawke) is a narcotics officer who's tortured by the conflicting facts that he makes peanuts busting drug dealers and that he has seventeen kids while the wife is pregnant with twins. Tango (Don Cheadle) is an undercover cop who's tortured by the fact that he's an undercover cop. Finally, there's Eddie (Richard Gere), a beat cop who's tortured by the fact that he retires in a week and he has nothing to show for it because he's an exceedingly shitty cop. They all want out of their job description as "Brooklyn's finest," one way or another. 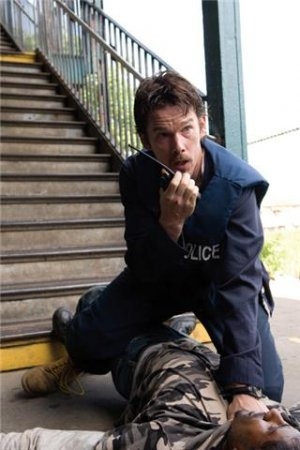 French Connect this!None of the film's three main stories have anything at all to do with one another. However, since Antoine Fuqua wants you to think that they do, or at least that they might, he keeps showing each character bumping into one another. Late in the movie, there's even a scene in which Sal and Tango wait to cross the street while Eddie drives by. They're each on their way to their own separate third acts, and through some slickly manipulative editing, we're led to believe that all three men have convened upon the same building. I'm fairly certain that they didn't, but that doesn't stop Fuqua, who cuts from Sal firing a gun to Eddie reacting in what looks like a completely different building.

In fact, this point bears repeating. Several of the edits in this film are unintentionally hilarious. In the very first scene, Sal has a back-alley rendezvous with one of his contacts. He then abruptly murders the contact and walks away into the night. Smash cut to Eddie waking up from a terrible dream, implying that everything Sal just did was one of Eddie's awful, awful nightmares. Eddie then tries to kill himself. I'm pretty sure that wasn't Fuqua's intent, but because I know what the Kuleshov Effect is and Fuqua apparently doesn't, I laughed.

The problems don't stop at bad editing. There's also the cinematography to consider. Just in case you didn't know that the cops were supposed to be the good guys and the drug dealers were supposed to be the bad guys, the film makes it easy for you to figure out through simple colors. The police are always shot in brightly lit rooms, completely washed out with fluorescent lighting, while on the flip side, the drug dealers only ever seem to exist in man-caves lit by nothing but the glow of their Playstation 3's.

Fuqua and screenwriter Michael Martin were clearly trying to evoke both the style and substance of The French Connection (hell, they even have Sal re-enact that film's famous car chase ON FOOT), but in doing their research, it's clear that they just watched The Departed a couple dozen times. Problem is, where Scorsese's film played fast and loose with the concept of good-cop/bad-cop, Brooklyn's Finest skips a few steps in the middle and just roundly makes the good cops bad people.

"Fred Ward or Richard Gere" is a fun game you can play at home!

I have to imagine that this movie is supposed to be some kind of half-assed anti-cop statement. The film discourages kids from dealing drugs by depicting how back-breaking and labor-intensive it is. The only thing the film's drug dealers ever seem to want to do is play video games, while the cops get to snort coke, bang hookers, and basically do everything that we all think drug dealers do when they're not out dealing drugs to each other.

Attention, Antoine Fuqua: Having two characters cross paths and say, "Oh, sorry, didn't see you there" is not the same thing as having intersecting plot-lines. Depicting a police officer's job as glamorously self-righteous yet at the same time utterly soul-crushing is not only thematically inconsistent, it's downright counter-productive in encouraging anyone to join the police force. You are not Robert Altman, you are not Martin Scorsese, you are not William Friedkin. Your movies are just vague approximations of what audiences expect out of this type of film.