EXPECTATIONS: Between Memories of Murder, The Host, and Mother, Korean director Bong Joon-ho has a handful of modern classics under his belt, and his English-language debut, Snowpiercer, promises to be yet another. So what if Harvey Weinstein tried to cut thirty minutes from the film because he thinks you and I are dumbass subhumans who need help watching movies? So what if the film got dumped into a microscopic U.S. release because Bong Joon-ho stood his ground and refused to make cuts? And so what if the premise is completely stupid? You couldn't keep me away from this film if you tried.

REALITY: Snowpiercer is a sci-fi parable about the fissures opening up in our society and where we're all headed that deserves to be every bit the generation-defining hit that The Matrix was fifteen years ago. It even comes pre-loaded with an ending that short-circuits any possibility for diarrhetic sequels. It's as smartly crafted as it is exciting and downright fun to watch, which is pretty crucial for a film about humanity's imminent extinction. 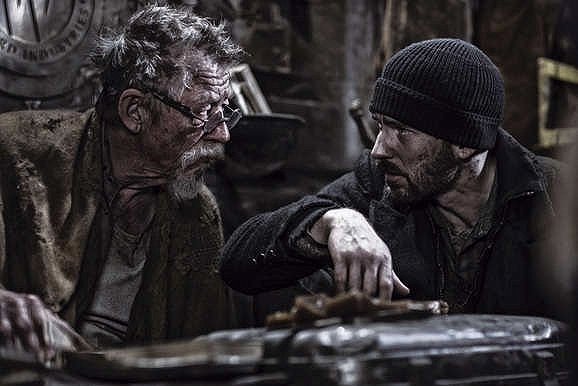 Aren't you a captain? Can't you do something about this?


In its opening moments, Snowpiercer lays out its thoroughly idiotic premise: To combat global warming, we dump a ton of cooling agents into the atmosphere (via chemtrails, naturally). This backfires, because of course it does, and triggers a new ice age that murders all but a thousand people. Those remaining live on an eternally moving train named the Snowpiercer. If that sounds ridiculous, don't worry your precious little brain cells, because it won't even matter after the opening credits.

The hero of the story is Curtis (Chris Evans), who lives among the poor class at the rear of the train. After seventeen years of eating grease bars and living in manufactured squalor, Curtis is ready for a change. He leads a charge to the front of the train with sidekicks Edgar (Jamie Bell), Tanya (Octavia Spencer) and Gilliam (John Hurt). As the team moves up the train, they capture resources and weapons that will aid them in defeating the next stage boss. Along the way, they pick up an engineer (Song Kang-ho) and his daughter (Ko Ah-sung), who agree to hotwire the rest of the doors in exchange for hallucinogenic drugs. 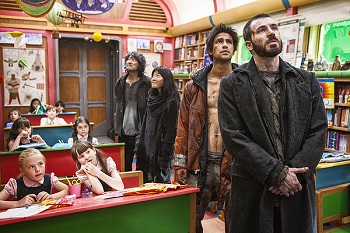 Hey kids, look! Poor people!Snowpiercer wears its politics on its sleeve, at times to the point of obnoxiousness. It's the haves at the front of the train versus the have-nots at the back of the train, which makes for a neat visual metaphor until it starts beating you into submission with it. Curtis wants what the fabled conductor Wilford (Ed Harris) has: wealth, luxury, food that doesn't look like jello turds. As he fights his way up through the class system, the toll that journey takes on him makes him wonder whether that's something he really wants. The cycle seems doomed to repeat itself. Someday, someone from the back of the train may come along and wreck his shit for the very thing he fought so hard to gain. It's not subtle, but then again, it doesn't necessarily have to be.

And while the film's politics scream fatalistic doom and gloom, Snowpiercer still delivers one hell of a good time getting us there. Each new train car offers a new obstacle to overcome. One car introduces Alison Pill as a schoolteacher force-feeding Wilford's religious kool-aid to her students. Another features a gang of axe-wielding thugs ready for a brawl that gives the hammer fight from Oldboy a run for its money. Yet another features a sushi bar in which Tilda Swinton steps out of a Wes Anderson movie to explain the science of closed ecosystems. There's really no telling what waits beyond the next door, and part of Snowpiercer's fun comes in when and how these scenes land. The pace of this film feels like a series of haymakers, blindsiding you with new set pieces and game-changing plot points every ten minutes or so. 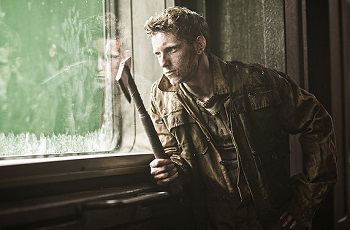 Boy, the greenscreen sure is coming down out there.To that end, Snowpiercer plays its audience like a fiddle. With each new turn, the film lowers our guard with a broad bit of humor, only to jerk us back into reality with a brutal display of violence. If you find yourself laughing, it's entirely by design, and you might want to brace yourself for what comes next. That's been one of Bong Joon-ho's calling cards ever since his first feature, Barking Dogs Never Bite. He'll inject 50 cc of comedy into otherwise dire situations to keep us invested in the characters. The Host had Song Kang-ho falling all over himself like an idiot; Snowpiercer still has that, so it adds Ewan Bremner screaming and flailing like a lunatic for good measure. Point being, if you don't like goofy shit happening in your grimdark sci-fi thrillers, you probably won't like Snowpiercer.

Whether you're in it for the sociopolitical underpinnings or for the sweet, sick action sequences, Snowpiercer really does have something for everyone. Unless that something for you is romance. There is no romance in Snowpiercer. Wilford verbally masturbates to the elegance of his train's design, but I wouldn't necessarily say that counts. So elegant ... so immaculate ... it's a system in constant need of lubrication, a blockbuster with an unpredictable plot and one of the best films of the year. Excuse me for a moment ...