EXPECTATIONS: I love movies. I love films. The "talkies", they're good, damn I love em, good stuff. Quite frankly, there's nothing I love more than stopping by the box office mid-way through my evening constitutional and taking in a good piccie. The sights, ah, the sounds! Those wizards up in Hollywood can conjure up anything these days, thanks to the magic of the most powerful computer of all - the human brain. However, If there's one thing I love more than films, it's comedy, laughter, good times, and all that sort of stuff - so I'm definitely excited to see how this "comedy" "film" will combine my two loves once and for all. AND YES I know that this movie's already been out for a few weeks! I've got other shit to do you crappy people!!!

If you want to find out more about this movie check out this website I found.


REALITY: I had a real wizard of a time at this zoetrope show. At first, when I saw this film, I thought "whoa, is this for real? Is this film actually for real? Are the people making this film ... huh!?" But when all was said and done, I realized that all the bad stuff in the movie was the main reason it was so good. Read on to find out why Mrs. Brown's Boys D'Movie might not only be the best film to come out this year so far, but the best film of the decade also.

The plot of this movie centers around the titular Mrs. Brown, played to eerie perfection by white Tyler Perry. Everything in [one of the Dublin streets where people shout at you to buy fruit and bootleg simpsons t-shirts, google this before sending off the article] is going lovely, until a Russian comes on the scene - and he's in league with a group of treacherous Chinamen. CAn our unlikely heroine restore racial purity to the part of Ireland where I once saw a homeless guy walk into the middle of the road during the middle of the day and just start pissing? This movie had me on the edge of my seat - and I paid for the whole thing!i

Before we get to talking about the movie proper, I should probably address the "elephant in the room," that is to say, the fact that this is a movie based on an Irish sitcom that is itself based upon a character developed throughout years of stand-up, theater shows, and books. However, Brendan Carroll actually shortened the titular character's name for the sitcom - removing the "e" in "Browne", possibly to sit better with a foreign [British] audience, because he is a race traitor. I'm done with this paragraph now. 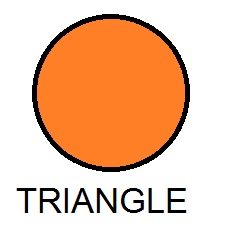 I intended this shape to be a square. Does my authorial intent make it so? No. It is a circle. I have taught you all I know of film criticism. Go now - go, and use your talents only for ggood.

First off, the scriptwriting is kind of a breath of fresh air in general. For a genre so dependent on cheap visual gags and formulaic storytelling, Mrs. Brown's Boys D'Movie seems almost crazily subversive at times. The film is satirical towards many of its Irish and British contemporary comedy films - even aggressive at times. Then again, considering the comedic powerhouse the sitcom/stand-up character/books conglomerate masterminded by Brendan O'Carroll has become, one wonders how much of this was written in the script, and how much was induced by veteran director Ben Kellett, who does not have a wikipedia page. However, this doesn't actually matter - death of the author much? Critical reading much? YEah, this guy knows a thing or two about movies.

We've also got to address, I don't know, the misogyny in this film? Fuck, I guess so. There were a good few women in this movie, but one of themw as played by a man in a dress, so ... let's say 9.5/10 for not haveing any bad misogyny? Sure.

[Oh nooooo I was hacked lol, a computer hacker hacked into my hard drive and changed the text I wrote for this paragraph lmao! Sorry about this, but it shouldn't be too noticeable. -g0m] 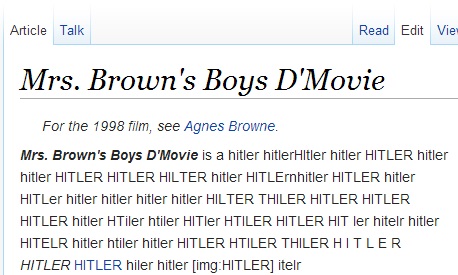 Here are my top ten things about this movie:

1. Brendan O'Carroll's voice at doing an old woman is both hilarious, as well as a helpful reminder of old women I've met in the past
2. All the inside of pubs and bars and stuff in this movie reminded me of alcohol and having a right bit of banter with the lads
3. Peter kay's smug little shit of a face caused me to imagine him getting his ass kicked by me
4. I love to get out of the house and have a good time in the cinema
5. found a $5 on the road outside
6. I like to spend money on popcorn and big cups of coca cola but I'm scared of shops
7. The ending - HA! But also the beginning, and all the good visual comedy and racial truths from the middle. Basically, the whole thing.
8. Good to get into a nice a/c room on a hot day
9. material to write this review
10. cant think of one

In conclusion, I have not seen this movie - but of course the medium of film has been entirely superseded by that of video games. And with games such as Metal Gear Solid V: The Phantom Pain on the horizon, it's never been a better time to be a gamer. Cheers.