Not a terrible week, all told. First we have the very pleasant surprise of Battleship, followed by the bitter disappointment of Lockout, then the joyful excellence of The Cabin in the Woods, and finally the utter mediocrity of The Three Stooges.

EXPECTATIONS: I have a strange kind of excitement for Battleship. Maybe I'm being crazy, but I am damn sure this is being heavily mis-marketed and is, in fact, a blockbuster against which all future blockbusters will be measured, for good or ill, and it's nice to be around to witness that kind of thing happening.

REALITY: While perhaps not the game-changer I was expecting, Battleship is much smarter and richer than your usual blockbuster fare. In bringing a board game to a cinema screen, director Peter Berg and screenwriters Erich and Jon Hoeber have boiled said board game down into a simple and effective philosophical idea and then built their film around that.

Talk about putting all your eggs in one basket.

Battleship follows the exploits of Alex Hopper (Taylor Kitsch), a young naval officer spurred by the support of his brother Stone (Alexander Skarsgård) and his girlfriend Samantha (Brooklyn Decker) to make a success of himself. On the eve of a wargames exercise, Hopper attempts to ask Samantha's father Shane (Liam Neeson) for his permission to marry her. Unfortunately for Hopper, Shane is the admiral of the fleet and is not impressed by Hopper's antics, especially when he gets into a fight with Japanese captain Nagata (Tadanobu Asano). When an alien invasion suddenly looms large, Hopper must work with Nagata to save the world from extra-terrestrial threat.

Now, I know exactly what you're thinking. Yes, this is a rather silly premise to base a film on. A board game where you guess at grid references and gradually learn through random attacks just what you're aiming at until something eventually sinks does not sound like a cinematic idea in and of itself. What is a cinematic idea is the central conceit that drives a game of Battleship. In a game of Battleship your every move is a stab in the dark with only two possible outcomes: a "hit" or a "miss," and even these are vague until targets start to sink. From every hit or miss you learn more about the field before you and win or lose based on equal parts luck and using the information you learn. Of course, the real kicker is that your opponent is doing the exact same thing to you. Every minor triumph and defeat in a single game of Battleship serves to teach its players a lesson in humility. 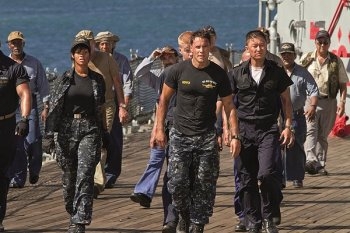 They do slow-motion walking toward camera on the first day of Naval training.What Battleship the film does is apply this philosophical principle to everything in life. Approaching a girl in a pub is a game of Battleship, allowing yourself to be tasered is a game of Battleship, even other games like football (soccer) and baseball are essentially Battleship at their core. Hell, toward the end of the first act this film even dares to suggest that 9/11 and the recent London riots were games of Battleship. Every time this happens, however, we are reminded that Battleship is a two-player game and that the other side is experiencing the exact same thing as we are: blindly firing at potential targets in the hopes of achieving a hit or miss and learning from that for the next move. Very few blockbusters are willing to humanise the terrorists with whom we are at war as a simple expositional exercise. The film will later go on to "hyper-humanise" (more human than human, to quote Blade Runner) the invading aliens, making them some of the most sympathetic faceless enemies you've ever seen.

The aliens themselves, in spite of being a truly antagonistic invasion force, are not intent on murdering every human they see. They allow the Americans to rescue their Japanese allies from the water after destroying their ship and seek always to minimise casualties where they can. Even their peg-like missiles use a system of explosive and implosive blasts to control the area of destruction. A single missile is not designed to sink a ship, but merely to cause very localised damage. That's a pretty interesting way of introducing the rules of the game to the film without being overt about it (in fact, it's pretty subtle). As the film rolls on, the human casualties become fewer and farther between as the aliens learn what is to be considered a threat and what is not. They even have smart weapons that learn by destroying things and quickly realise for themselves that a child playing baseball is not a target they need to concern themselves with. This idea of acquiring information through blind destruction is, once again, philosophically tied into a game of Battleship; it's the basis of learning-by-doing that is at the heart of the game.

I have a feeling Kitsch will enjoy a reverse-Neeson career wherein he is an action movie star early in his career and goes on to become a respected leading man, as opposed to the other way round, right Liam?

As the aliens and their computerised weapons continue to learn, their knowledge is shared amongst them as they seem to have no military hierarchy, but are rather more communistic and egalitarian. On the human side, it seems that the further up the chain of command you go, the less understanding of the situation you will find, all the way up to the Secretary of Defense (Peter MacNicol) who has absolutely no idea of what is going on and doesn't particularly seem to care. Even Neeson's Admiral Shane has less idea of what is actually happening than Hopper, Nagata and their crew.

The very best scene in the film occurs during the second act where Nagata reveals that his government has been planting buoys that read water displacement all along the Hawaiian coast to keep tabs on them and they use this system to get a very vague idea of where the alien vessels are by randomly shooting at likely targets. Of course, every time they fire they give away their own position to the enemy who cannot see them in the dark. This is the literal game of Battleship that forms the backbone of the film, with Nagata shouting target co-ordinates to Raikes (Rihanna) to fire upon and just see what happens. Everything is building up to this event and everything after feels a little anti-climactic by comparison, but it alone is worth watching the film for. This is how you use game rules and mechanics to make something cinematic, and Battleship is pure cinema!

Hit!The cast is kind of a mixed bag overall. Taylor Kitsch and Tadanobu Asano both have movie star charisma and talent and display a very effective chemistry. If they got both of these guys back to do a sequel, I wouldn't complain. You're probably dying to know how Rihanna's performance holds up, too. In truth, she doesn't get an awful lot to do besides spout one-liners, and even then I feel an actual actress would have made the character a little more interesting.

Brooklyn Decker's performance is fine, but her role feels rather inconsistent due to a shoehorned-in afterthought of a subplot in which she takes wounded soldier Mick (played by actual veteran and double-amputee Gregory D. Gadson, who is very clearly not an actor) on a walk through the mountains where they happen upon scientist Cal (Hamish Linklater) and help disrupt the aliens' ground operations by punching them in their faces. This entire subplot could have been removed, allowing Decker to share a little screentime with her movie-father Neeson, as well as leaving Linklater free to spend more time reinforcing the political implications of life being a game of Battleship where choosing not to play is not a viable option. What we're left with here is a bunch of scenes that feel a little too close to Independence Day carried by a non-actor just to keep the action levels high. I wouldn't go so far as to say that any of this ruins the film, though, it just all feels woefully unnecessary.

Battleship even takes some time in the third act to bridge generational gaps, suggesting that we should all put down our Xbox controllers and play one of our granddad's games where we might actually learn something about ourselves. I understand that the entire point of Battleship is to sell board games, but it comes from such a sincere and heartfelt philosophical standpoint that it's impossible for me to feel any ill will towards it. Besides, you don't need to spend money to play Battleship, it can be played with two sheets of paper and a couple of pencils, just ask your Granddad how.

MINORITY REPORT: Now this is a film I can relate to. Aliens everywhere! Random gunfire in all directions! Pop singers in the Navy! The only thing missing is the desperate use of outdated weaponry. Wait, this film has that too? It's like they're filming my life... - Donovan Laird, Wasteland Chronicle