The Cabin in the Woods

EXPECTATIONS: Despite having little affection for Joss Whedon, something about The Cabin in the Woods piqued my interest ... two years ago, when I first saw the poster. Maybe it was the self-referential taglines (Scream spoke to me far too much as a teenager), maybe it was co-writer/director Drew Goddard's (Cloverfield, Lost) involvement or maybe it was the faint whiff of sci-fi that permeated the pre-release buzz. Whatever the reason, I was hooked. While The Cabin in the Woods languished in MGM's post-bankruptcy hell, my interest in the film solidified because, like most children of the '80s, I desire instant gratification, and being told "you can't see this yet" goads my inner child into throwing a tantrum, the likes of which haven't been seen since the last time my parents told me I couldn't have ice cream for breakfast.

REALITY: Great horror films rarely get the recognition they deserve upon release, as evidenced by the critical drubbing endured by Night of the Living Dead, The Shining and The Thing. Luckily, the mainstream critical establishment and fanboys from every dark corner of the Internet are praising the ever-loving shit out of The Cabin in the Woods, and for good reason. It might be a tad too soon to vault The Cabin in the Woods into the upper echelon of the horror canon, but I'll be damned if I don't want to see it again ... and soon. 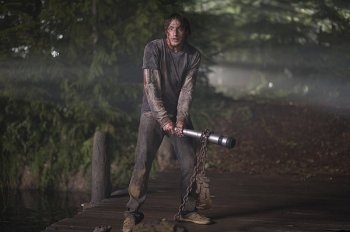 Youmight have trouble swinging that, it being chained down and all.Following a thread of self-reflexivity woven by Scream and picked up again recently by Rubber and Tucker and Dale vs. Evil, The Cabin in the Woods takes a shopworn premise (five college kids gleefully ignore all signs of danger and plunge headlong into a nightmare) and takes it to the proverbial next level, and then a few levels beyond that. To further describe the plot would do a disservice to a film that earns a lot of goodwill from batshit escalations that work even when they shouldn't.

The trailer, other reviews -- even the IMDb cast list -- serve up spoilers, so those with even the most passing interest in horror should avoid reading anything about The Cabin in the Woods and head to the theater, like, five minutes ago, because while I hope and imagine the film retains its charm despite foreknowledge, the filmmakers' primary goal is to subvert your expectations of how a film titled The Cabin in the Woods should proceed, beginning with the first frame.

Forgive me for gushing, but The Cabin in the Woods is like crack for semi-educated Internet movie critics who waste valuable financial aid retaking film classes for the hell of it. In addition to its strengths -- likable characters, biting humor and the aforementioned plot -- The Cabin in the Woods accomplishes what so few films do by sneakily allowing critics to form criticisms during the first hour before blithely retaliating in the final act.

If I were to only review that first hour, I'd likely object to its tonally dissonant shifts from gruesome horror to screwball comedy, its choice of villain(s) and the credibility of its premise. Well, excuse me for being closed-minded and forming an opinion before the credits roll, by which point The Cabin in the Woods has reconciled those tones, proved the worthiness of its antagonist(s), carried the premise further than I could have imagined and given the audience an occasion to cheer. I haven't heard an audience respond so vivaciously to a horror film in -- well, going on seven years now. 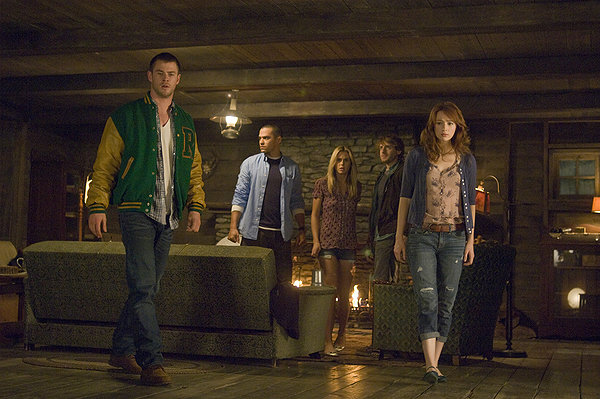 The obligatory group of soon-to-be-dead teenagers played by actors in their mid twenties.

So what if the CGI gets dodgy towards the end and the casting director relies a little too heavily on Whedonverse exiles? These are minor flaws in a film that finally, successfully walks the tightrope between horror and comedy while serving up serious genre criticism and paying homage to everything from Lovecraft to The Evil Dead. It's downright inspiring to see a domestic horror film brimming with ideas; the last film to take this familiar premise in new, weird directions was Cabin Fever, and we all know how that turned out.

The theatrical re-releases of Titanic and American Reunion are still hanging around the multiplex, and while both are solid films, they prey on nostalgia for a simpler time, that pre-9/11 era when Jason Biggs fucking a pie and mawkish Leonardo Di Caprio slipping into the great beyond counted as defining moments in cinema.

Here, then, is a film that seeks to look forward and prove the horror film can evolve past the clichés that have plagued the genre for some 50 years -- those same clichés that have kept American horror entrenched in an idea ghetto in which filmmakers toil to make the same four or five films. I'm not saying recent American horror is entirely devoid of original gems, but those gems are rare and generally maligned by critics; most of the time, we horror fans are stuck panning for gold in flawed movies or looking overseas to find films that break the mold. Otherwise, films like Drag Me to Hell and The House of the Devil -- great in their own right -- are really riffs on discarded movements within the genre.

I've never seen a film quite like The Cabin in the Woods, one that so beautifully unifies a dozen seemingly disparate ideas, but that Whedon and Goddard packed so much into a film shelved and neglected by MGM leads me to wonder what genius filmmakers are waiting in the wings for the Hollywood economy to sort itself out and what genre-benders are promised us in the years to come.

*I realize this puts The Cabin in the Woods in league with The Twilight Saga: Breaking Dawn - Part 1, that satirical masterpiece of fad subversion, but The Cabin in the Woods works on many of the same levels, even though it's more forthright in its intentions. What can I say? I place a premium on audacity. That's just part of being a horror fan, bub.

MINORITY REPORT: And so concludes this week's edition of "Joss Whedon Ruins Genres." Tune in next time when Joss will have a clever and witty explanation for why the guy with the picture of his family always dies in a war movie!- Martin R. "Vargo" Schneider