EXPECTATIONS: Never pass up the opportunity for a dumb action film. Even if you're no great fan of the genre, I don't think you can deny the power of an effects-laden spectacle to please a crowd of sugar-infused moviegoers. Thor and Real Steel turned out to be two of my favorite movie outings of 2011, thanks in part to their innate silliness, but also thanks to how the crowds willingly ate up all the nonsense we were watching. If anything, I'm at least hoping for Lockout to deliver on that front.

REALITY: I'd like to make an amendment to everything I just said: A dumb action movie with a good crowd can turn into a memorable experience, if the filmmakers are smart enough. A canny filmmaker can take a tired premise and inject it with enough wit and engaging turns to carry the audience for ninety minutes. There is a fine line between "Dumb Action Movie" and "Mentally Deficient Action Movie," and Lockout has signed itself up for lifetime service in the Mentally Deficient Action Movie Prison known as the SyFy Channel.

Lockout takes place on MS One, an orbiting space prison that looks like Deep Space Nine got caught in an arcade claw game. When a mass breakout results in the president's daughter (Maggie Grace) being taken hostage, the Secretary of Defense (Peter Stormare) decides to send in a convict named Snow (Guy Pearce) to rescue her before the president orders MS One's destruction. Along the way, Snow seeks out an inmate named Mace (Tim Plester), who has hidden away evidence of Snow's innocence. During all of this, MS One is falling out of orbit and threatens to crash into New York City. 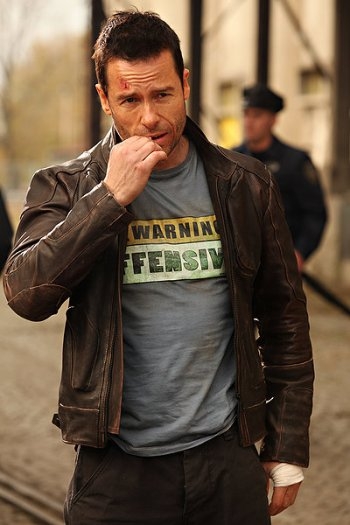 You look a bit too nervous to be an action hero, maybe we should reconsider.With a unique setting and a strong central hook, there is absolutely no reason why Lockout couldn't have been a decent knockoff of Escape from New York. Where the film stumbles so terribly is in the writing. In fact, the character of Snow is emblematic of everything wrong with this film. He's the poorest excuse for a Tough Guy hero I've ever seen in a mainstream motion picture. Every one-liner out of his mouth is an 8-year-old's version of what a tough guy would say. Telling people they're adopted might be funny on the internet, but nobody featured in an R-rated space prison movie should talk the way Snow does. It's not badass; it's embarrassing.

Yes, I realize I've just invoked the Juno argument. But while it's true that I have no idea how teenage girls talked circa 2007, I have a pretty good idea of how space prisoners shouldn't talk circa 2079. When your T-shirt warns the viewer that you are, in fact, offensive, you've instead become the opposite of offensive. You're the asshole with a heart of gold; offensive on the outside, but righteous and probably still an asshole on the inside, but we love ya anyways. Snow may as well carve the words "JOHN MCCLANE" into his chest, because that's the person we all know he wishes he was in the first place.

Visually, the action scenes are a mess. For every space scene cribbed straight from Star Wars, there are a dozen shootouts and fistfights that have all the clarity of a Jason Bourne movie viewed from behind a foggy window. There is even a Thunderdome-esque brawl inside a gravity generator (read: floaty room) that feels like it should be one of the film's big setpieces, but it's over in thirty seconds and makes zero visual sense. The best action scene in the whole film comes right up front, as we watch Snow flee a crime scene on a motor-unicycle and crash it into an above-ground subway station. It's an over-the-top scene that sets the bar for the entire rest of the film, which feels content to just stroll right under it without much effort.

It's difficult to pick apart this film in any meaningful fashion, because it all falls apart so easily. Lockout seems composed of a dozen cool things that screenwriter Luc Besson wanted to see on the big screen, without anything tying it together to form a cohesive whole. Snow is a wrongly accused convict, framed for murdering a dignitary. Okay, great! What does that have to do with going to a space prison and rescuing the president's daughter before the whole station goes kerblooey in a space battle ripped off from The Phantom Menace of all things? I haven't the foggiest clue. 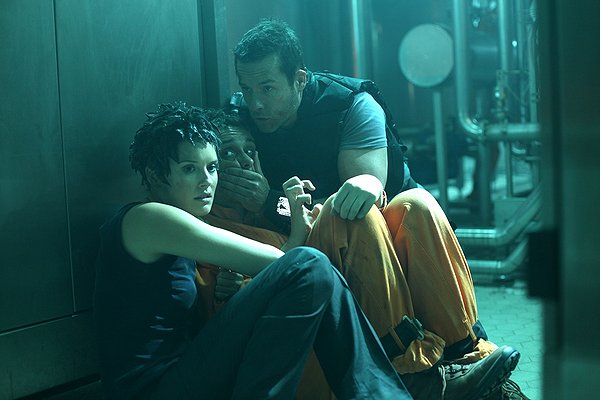 Nothing would please me more than to be able to call Lockout a clever satire of the sci-fi/action genre (or even a halfway decent movie). For a brief moment, it feels like that's the direction the film might have gone. Luc Besson has it in him; his résumé is filled with a dozen offbeat action yarns, ranging from the goofy space carnival that was The Fifth Element to the fascistic undertones of Taken. The fact of the matter, though, is that Besson and first-time directors James Mather and Stephen St. Leger simply don't have a clue how to spin this story into anything worth watching.

There is a silver lining to Lockout's complete and utter failure, though. Many of the film's shortcomings are hilarious. Snow's one-liners alone could be turned into a drinking game. Drink every time Snow says something that makes someone roll their eyes. Drink every time Snow makes fun of the president's daughter for being a girl. Drink every time you laugh at Peter Stormare's unidentifyable accent. Finish your drink when a character suddenly shows up with a Justin Bieber haircut. Lockout is a dangerous film to break out on your next Bad Movie Night. Watch it with a crowd to make sure you don't drink yourself to death.

MINORITY REPORT: I am very disappointed to find that a film I've been really looking forward to is so below par. That said, I do like that Lockout seems to be continuing the anti-subtle trend of sci-fi movies that use T-shirt slogans as character development after Skyline gave us Eric Balfour's "Good Art" tank top and Splice had Adrien Brody wear a T-shirt that said "I Bring Nothing to the Table." Sadly, Lockout doesn't seem to be doing as effective a job of it. - Ian "Professor Clumsy" Maddison