EXPECTATIONS: This is one of those movies where the story behind the film is potentially more interesting than the film itself. The Farrelly Brothers wanted to make this movie way back in 1996 (back when they used to make funny movies) and the original cast featured Sean Penn, Benicio Del Toro, and Jim Carrey. However, after Del Toro and Penn dropped out, presumably because they suddenly remembered that they were Sean Penn and Benicio Del Toro, so there is no reason on earth for them to be in a Farrelly Brothers movie, the film has spun around in development hell for over a decade. Finally, convinced by the amazing lack of demand for a Three Stooges modernization, Hollywood finally got a cast featuring a former MadTV cast member and the guy from Will and Grace. Wow. That has got to be the biggest downgrade in cinematic history. That's a good start, right there.

REALITY: What we're dealing with here, ladies and gentlemen, is a film whose very existence is so inexplicable that most of the comedy comes not from the film itself, but from how very bizarre it is that we're watching it. No one asked for this, save two guys who haven't been funny in over a decade, and yet here we are, awkwardly chuckling because we're not sure what to make of this. I'm not really sure what to make of this, so I'll do the best I can to describe this phenomenon to you.


The Three Stooges imports the classic trio into modern times and leaves them relatively unchanged. What we receive, strangely enough, is a backstory of the Stooges growing up as children in an orphanage that is supposed to cement in our brains just how close these three are to each other. I could argue that we probably didn't need to build empathy for these characters, but it's nice that they tried, and it sets up the rest of the film quite nicely. After growing up in seclusion together, Moe (Chris Diamantopoulos), Larry (Sean Hayes) and Curly (Will Sasso) find out that the orphanage is in danger of being shut down, unless they can raise $830,000. So the three set off to make their way in the world, hoping to raise the money. Immediately, they are contracted by a manipulative woman (Sofia Vergara) who wants them to kill her millionaire husband, under the guise that he is incredibly sick and wants to go out on his own terms. 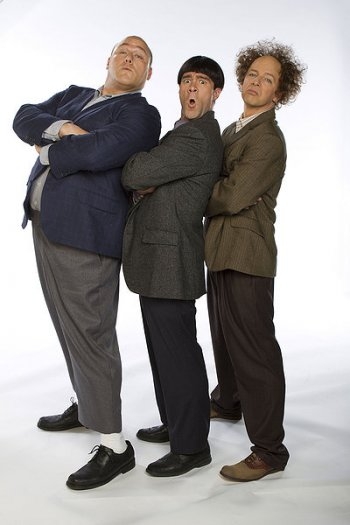 Oh dear, just leave now.I'm going to stop the plot description right there, because that's already more than is necessary, and because that last sentence is so weird that it bears further analysis. Isn't that the most bizarre plot you can imagine for a Three Stooges film? Somehow we've gone from "Larry, Moe, and Curly are bad at plumbing" to "Larry, Moe, and Curly are bad at assisted suicide." This is especially bizarre when you look at the fact that the Farrelly brothers were gracious enough to make no attempt to "update" the Stooges themselves. Yes, Moe spends time with the cast of Jersey Shore, but the joke is that he doesn't belong there. It's not like they have Curly doing the Numa Numa dance or saying "I don't always Woop Woop, but when I do I WOOPWOOPWOOPWOOP Nyaanyaanyaaa!" The three impressions are so spot-on (Sasso's especially) that these are literally the exact same characters. So rather than update the characters, they update the situations. And apparently assassination is to 2012 as fixing a clock is to 1945.

I can't help but feel this whole premise would have been better served if we just had these guys make a web series or a Netflix original or something. No need to deal with the plot, just seven minutes of these three showing up to set up someone's DVR or something and then having mishaps along the way. Because when this movie is just these guys being the Stooges, it's not bad. It's almost good, in fact, as good as a movie that involves a baby-pee squirt gun fight can be. It's when we're forced into developing the story, which is more often than not, that everything falls apart. The movie even wants to do this, because it puts little episode cards in between each act. It's a nice touch, but because they're part of an overarching plot not meant to be seen separately, it means nothing.

The Three Stooges are not characters that were intended to carry a storyline, they're just not. I'm a huge fan of proper "dumb comedy" like The Stupids or the Bill and Ted franchise or even the Farrellys' original tour de force Dumb and Dumber. The reason these films succeed is that they're incredibly smart movies with dumb characters. The Three Stooges does not work that way, because the characters are the movie. Everything else has to be dumbed down to their level, otherwise we start to ask questions like "How can you commit murder in a universe where no one ever dies?" or "How can the Stooges accrue $830,000 in medical bills when they never get hurt?" or most importantly, "Why are the child actors in this movie so incredibly terrible?" It should come as no surprise that the films this movie has the most in common with are mid-'90s kid flicks like Dennis the Menace and The Little Rascals. But while those films dealt with the passing of time in regards to their characters by simply ignoring it, this movie hits you over the head with how dated it already is.

The fact that Jersey Shore is a plot point is bad enough, but Isaiah Mustafa - the damn Old Spice guy! - shows up for a cameo. You know how you look at some movies, and think "This film is so '90s!" I just can't help but realize how... 2011 this whole movie is, except it'd be much better off if it were 1994. (So would the Farrelly brothers, come to think of it.) So we've got characters from 1939 forcing us to feel nostalgic for stuff that's just barely no longer relevant; dating itself from the moment it gets started. Imagine watching this movie in 2087, when Zaphod Weinstein turns to his brother Kodos and say "You know what we need? Another Jay and Silent Bob movie!" No one will understand why it's funny that Moe is hanging out with Snooki, because "Snooki" will be the 8th most common name in the nation by then. I realize that the point is to illustrate that the comedy of the Stooges is timeless, but you're not exactly making a new discovery here. I don't need to be reminded that a guy getting hit in the head with a hammer is funny.

What I did need to be reminded of, though, was how good the original Three Stooges shorts are, and how influential they are today. Even though it's a fun little homage, we didn't need this film. We already have a modern-day Three Stooges: It's called Jackass. That said, in a world where guns get digitally edited out and replaced with walkie-talkies, there's something refreshing about seeing cartoonish violence on the big screen, in a film aimed at kids. It's like we're pretending our kids understand the difference between fantasy and reality. But in case they don't, two actors playing Peter and Bobby Farrelly come out right before the credits roll to explain that all the hammers were rubber, and give the standard "Don't Do this At Home!" message. I was going to complain, but I figured it's a small price to pay for a good old-fashioned eye poke. I just wish it had trailed a more successful movie.

MINORITY REPORT: The Farrelly Brothers are still making movies? I guess even dated TV movies can end up in cinemas if you directed a hit once. - Ian "Professor Clumsy" Maddison