EXPECTATIONS: When they remade some of the more iconic horror films from the 1980s and it turned out nobody gave a shit, I thought that meant maybe Hollywood learned its lesson and would leave well enough alone. Why I thought this, I haven't the slightest clue, because we all know damn well that's not how things work in The Land of Cinema. Anyway, Fright Night is a movie I'm familiar with in name only. So, sure, remake it. What do I care? All I know is that there are vampires and there is some kid that kills vampires. If this turns out to be more of a mature take on The Monster Squad and less a Twilight cash-in with explosions, then I'm sure I'll enjoy this one just fine. 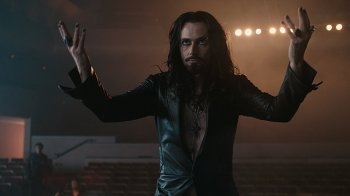 This is how Scottish people enjoy their weekends.REALITY: Thanks to movie technology becoming cheaper than ever, any jerk with a video camera and some red food coloring can make his own horror movie (and most of them do). We've got more SyFy Channel Original Movies than we know what to do with; Hollywood keeps remaking anything anyone remembers; and every toolbag on the internet thinks he can make the next great fan film. As a result, all it takes to impress people anymore is an original thought or novel approach. So when Fright Night 2011 comes along and adds an interesting twist or two, it's certainly worth taking a look.

As the film opens, estranged friends Charley (Anton Yelchin) and Ed (Christopher McLovin-Plasse) are investigating the disappearance of a classmate. Ed thinks it may be vampires, while Charley thinks Ed is retarded in so many ways. Meanwhile, Charley's mom (Toni Colette) starts warming up to their new neighbor Jerry, a bachelor handyman (Colin Farrell) who just happens to secretly be a murderous vampire. Soon, Charley is forced protect his mother and girlfriend (Imogen Poots) by seeking the help of a Las Vegas magician who himself just happens to secretly be a vampire hunter.

While not an entirely successful film, Fright Night at least manages to do a decent job of plugging the vampire genre into a couple other genres and letting the two bounce off one another. The first hour of the film plays out like some kind of odd domestic thriller, with Charley spying on Jerry to find out whether he's really a vampire or just a regular old sexual predator. Then after an explosive turn (i.e. a house literally explodes and suddenly the movie changes direction), the second hour becomes an action movie about kicking vampires' asses. In that regard, it's sort of like From Dusk Til Dawn, but with about ten times the subtlety. 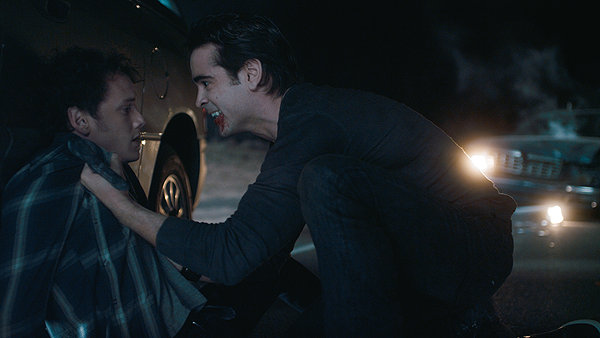 In this shot you can clearly see that all that scenery-chewing has caused Farrell's gums to bleed.

This makes for an interesting dynamic between the first and second half, but Fright Night as a whole really suffers from an inconsistent script. The movie has some fun playing around with vampire lore, but it only introduces another 'rule' whenever the plot needs something interesting to happen. True, Jerry has to be invited into a person's house before entering, but what's stopping Jerry from simply dragging Charley into his garage when the kid's taking out the trash? Also, according to half the characters in the film, Las Vegas is perfect for a vampire in that it's a city full of transients who mostly come out at night. This would be an interesting twist if the writers had bothered to make use of it. Saying an idea a bunch of times is not the same as developing it.

Additionally, the film tries to have its cake and eat it too when it comes to generating tension. On a number of occasions, the film builds up tense moments the way most horror films do, only to deflate the tension moments later and scare us with something else that makes no absolutely no sense. Charley will slowly approach a closed door, the music builds, he steps forward, he slowly turns the doorknob... And then there's nothing behind the door and the music stops. Oh, okay. ... But then, wait! Someone unexpected shows up and we're supposed to be startled because we totally didn't see that coming! After the fifth time this happens, I actually wound up expecting every jump scare to work this way. 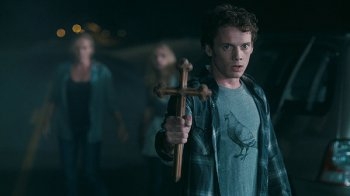 I can't wait to see the new movie with the unlikable kid from The Beaver!The filmmakers probably thought they were being cute by playing with how we expected certain scenes to play out, but it's not done in anything resembling a clever way. It's just annoying. They don't really play it for laughs, either, so I can't even say "Oh I get it, it's supposed to be a parody." Fright Night edges toward parody every now and then, but that's really only in the scenes where David Tennant shows up to do his drunk Russell Brand impression.

Speaking of which, I'm not exactly sure what David Tennant is doing in this movie. He plays the role of Peter Vincent, a Criss Angel-esque Vegas performer who helps teach Charley how to kill the vampires. However, as written, the character only fills that role for a minute or two. The other twenty-eight minutes of Tennant's screentime are either chewed up by Colin Farrell, or spent letting his character moan about how he hates being a rich magician living in Las Vegas. It's a fun performance, I'll grant him that, but it seems utterly superfluous. The only reason his character exists at all is because there was a character named Peter Vincent in the 1985 version, and also so the filmmakers could get some mileage out of having set the film in Las Vegas.

Tennant's character only exists to do things that the plot really doesn't need him to do, but the principal cast really delivers on an otherwise shaky script. Anton Yelchin and Colin Farrell share an interesting dynamic onscreen, and it makes for a lively game of cat and mouse. There's a scene in which Jerry stands in Charley's doorway while Charley searches for beer. It starts innocently enough, but it quickly takes a creepy turn as Jerry cases his home and calmly threatens Charley's family right to his face. It's a simple enough scene, but it hammers home the film's underlying theme of alpha males competing for dominance, and the two actors really nail it.

At times, Fright Night is a nail-biter in the classic thriller sense. At other times, it's a nail-biter in the 'doing it out of boredom' sense. As entertaining as certain scenes are, other scenes seem to drag on and on without adding anything to the plot (mostly in the first act). The film is definitely a mixed bag of good performances and idiotic scripting, but if watching people beat the living hell out of vampires is your idea of a good Friday night, then there are certainly worse things you could be doing with your weekend.

MINORITY REPORT: As much as nobody ever asked for a remake of Fright Night, you have to admit that it has a title that appeals to your base instincts. We need more films with titles like this: There Will Be Blood, Action Jackson, you get the idea -- something that tells you everything you need to know about what you're letting yourself in for. - Ian "ProfessorClumsy" Maddison