EXPECTATIONS: I have pretty high hopes for this one. I've said before how much I love fighting movies, plus Joel Edgerton and Tom Hardy are two actors I've been keeping an eye on. On the other hand, the movie seems to be a two-hour ad for Tapout gear, and I've never seen anyone wearing one of those shirts who wasn't a total douche.

REALITY: This is the most intellectual movie about men beating the shit out of each other I have ever seen. Seriously, I went into this expecting some poorly written, hackneyed tale of brotherhood cliches akin to something out of WWE Film Studios. (Side note: How is WWE Film Studios a thing that exists?) I came into the movie expecting a testosterone-laden punchfest, with characters awkwardly pausing to talk about their feelings in between suplexes. What I got was a complex drama with realistic, flawed but likable characters in a conflict that actually divided the audience emotionally. And there was still a whole lot of punching! 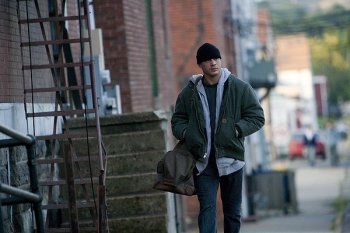 I'm pretty sure Tom Hardy is just ninety per cent neck at this point.Now to be fair, there's not really a lot of punching for the first hour of the movie or so. That's where things like story and character development happen, and they don't only exist for the sake of existing: They're actually pretty damn good. Edgerton and Hardy play Brendan and Tommy Conlon, two brothers who haven't spoken to each other or their recovering alcoholic father Paddy (Nick Nolte) in nearly 15 years. Tommy, an Ex-Marine, shows up on Paddy's doorstep looking to train in Mixed Martial Arts cage-fighting so he can compete in a large upcoming tournament for a five-million-dollar prize. Meanwhile, high-school physics teacher Brendan moonlights as a cage fighter to make some extra money to fight the foreclosure on his house. After getting suspended for a semester, Brendan enlists the help of eccentric trainer Frank Campana (Frank Grillo), eventually finding himself in the same tournament as his brother. The contrast between the two men is at the heart of the film, and each lead carries his story so well, by the end you're not sure who to root for. Edgerton deserves an Oscar nomination for the final scene alone, and Hardy peppers in just enough humanity to balance out the unlikable aspects of Tommy's behavior.

Frank has pictures of Nikola Tesla on the wall of his office and trains his crew to the sounds of Beethoven. References to Moby Dick and Greek mythology pervade throughout. A subplot looking into Tommy's past in the Iraq war dares the audience to go into SUPPORT ARE TROPS territory, but brilliantly avoids it, without showing any disrespect to the character or the U.S. Military. All of Tommy's scenes for the first hour are dimly lit with gritty film effects, to contrast with Brendan's flourescent-white suburban world. Even the two men's fighting styles are designed to illustrate the differences between their lives. Tommy is fast and furious, a Tasmanian-devil of kicks and punches, while Brendan takes a beating and waits for his moment to strike against his tiring opponent. There are numerous other examples, but discovering them is part of the brilliance of the movie. They are an immovable object and an unstoppable force, and the movie has the respect not to have one of the characters point this out. (It would be incredibly easy, as our white knight is a physics teacher.) 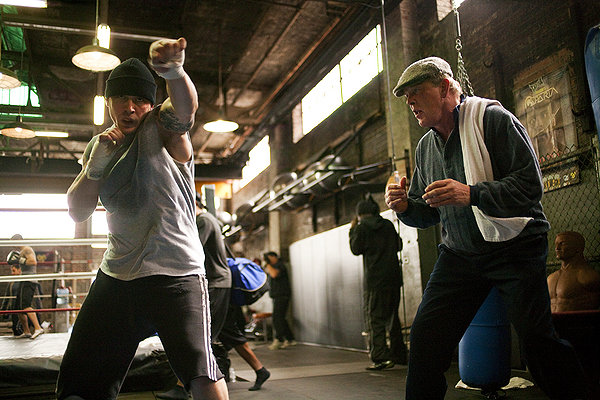 You have to face your opponent, you're doing it wrong.

If I have to complain about something in this film, I'd say that the lack of personality from the other opponents in the tournament is a little disappointing. On the other hand, when one of your characters is nothing more than "Large Russian Man," it's probably best to limit his lines, lest we fall into Ivan Drago "I MUST BREAK YOU" territory. It was also nice to see that my fears of this film being for the Tapout-wearing backyard-cage-fighting crowd were in vain. The film basically shows that every person wearing the gear is kind of a dick, and our heroes go out dressed in such memorable outfits as "Black hoodie" and "Green T-shirt." At one point, the film even looks down on the MMA imitators, as Brendan mentions that he at first he won't be against actual fighters, "just guys who have watched too much UFC." I hope the fact that this film doesn't hide its distaste for its primary audience doesn't hurt it in the long run, because quite frankly I find it hilarious. That said, the founder of MMA and the presidents of Tapout make appearance after appearance as themselves in the movie, just to remind you that this is all because of them. Their arrival is always heralded by someone saying their names, which is so annoying that I refused to put the names above in parentheses. Screw those guys.

Another odd spot in O'Connor's direction is the lack of fluid motion in many shots, as if the scene were being recorded by a hand-held camera. The camera moves, and it literally bounces up and down with the camera operator's footsteps. It's like entire scenes were made by a 15-year old with a Handycam and a copy of Windows Movie Maker. This mostly works for the fight scenes, especially from the crowd's point of view, but when employed in dramatic scenes, like the ONLY scene where the two leads talk to each other, it's a pretty heavy distraction. But this mistake is more than made up for with the film's pacing. The buildup is so strong leading up to the tournament that the entire event -- one fight after another -- feels like a payoff that lasts the entire third act. Though we realize what has to happen in order for the movie to have the conclusion we all expect, there's still enough tension there to make you wonder what will happen to these characters. Each fight is a film in itself, rising and falling, though the gratification is a little more instant with Tommy's scenes. As another thought, why do sports movies always end immediately after the big match? There are still plot threads you have left unresolved! We'll all figure that it turns out okay, but still, we've invested two and a half hours with these people, it'd be nice to see things all the way through.

Comparisons to last year's The Fighter are inevitable, even though the two movies take their similar themes in very different directions. Pound-for-pound, Warrior is actually a better film, if only for the fact that it has more interesting things going on in it. In a face-off, the performances and pacing in Warrior are superior. (Though if I were a betting man, I'd say Melissa Leo could probably take Nick Nolte in a cage match.) Like its two heroes, Warrior will be a long-shot underdog when it comes time to make Oscar nominations, but it deserves credit for stepping into the ring.

MINORITY REPORT: The reason WWE Film Studios exists is so we could all enjoy the majesty that is The Condemned. Oh, and in answer to your other question, the one about sports movies always ending right after the big match/game, it's because that's what Rocky did. - Ian "Professor Clumsy" Maddison