EXPECTATIONS: I haven't seen a trailer for this movie in months - MONTHS - and I think it's about a gospel choir or something, with Jordin Sparks making her film debut and Whitney Houston in her final role? Who knows? Who cares? Who pays to see this garbage?

REALITY: For more than one reason, TriStar should have cut its losses and shelved Sparkle, a mediocre, hypocritical and unfortunately timed remake of a 1976 film I haven't seen. According to the ever-trustworthy Wikipedia, Sparkle '76 was a personal favorite of Whitney Houston, who executive-produced and starred in Sparkle '12 before succumbing to a lethal combination of coke, heart problems and Los Angeles bathwater, which might have killed her on its own. 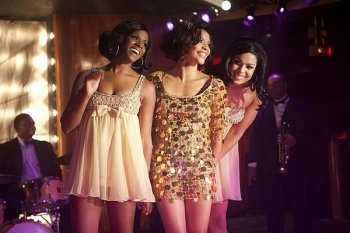 The smiling is nice, but is it really a performance? I can see smiling at home.Witnessing Houston's turn as Emma, the God-fearing mother of three women who persist in forming a girl group despite her wishes, is a lot like watching holographic 2Pac or listening to Amy Winehouse's posthumous third album: Any positive qualities on display are negated by the knowledge that a) it's a performance from beyond the grave and b) someone, somewhere, is profiting from Westerners' inability to see dead celebrities as anything but tragic geniuses. For the record, I spent most of Sparkle looking for signs that Houston was only two months away from a drug accident, which makes Houston's presence more of a distraction than a boon ... not that Sparkle has much to offer anyway.

As a period piece, depicting the Detroit soul scene circa 1968, Sparkle proves director Salim Akil, working from a screenplay by wife Mara Brock Akil, has the ambition of Scorsese but neither the skill nor the scope. The consequence of such choices, which highlight artifice when a film falls short of electric, is Sparkle's passing resemblance to the movie-within-the-movie from Mulholland Drive. Yeah, I see the polyester, the vintage microphones and the classic cars, but the subpar acting, broad characterization, unconvincing soundtrack and laughably turbulent melodrama keep me at a remove. This Detroit is artificial, and these actors are playing pretend.

Mara Brock Akil cut her teeth on sitcoms, which explains why she populates her screenplay with types rather than characters: The fictional girl group Sister and Her Sisters includes bad girl Tammy (Carmen Ejogo) and good-goody Sparkle (Jordin Sparks). The trio is rounded out by Delores (Tika Sumpter), whose character is so poorly defined she's playing third fiddle whenever the stark differences between Tammy and Sparkle come to a head. Delores cuts her hair down to an afro and goes to med school in 1968, making her the most interesting character by far, but apparently this level of drama is too compelling for Sparkle, which has the depth and plot of your average episode of VH1's Behind the Music.

Such poor characterization is reflected in Tammy's and Sparkle's romantic interests. (Delores isn't given a romantic interest, because ambitious women are man-hating dykes or asexual at best, right?) Sparkle grows enamored with their manager, Stix (Derek Luke), while the sexually aggressive Tammy falls in with Satin (Mike Epps), an Uncle Tom comedian who gets rich at the expense of fellow black people. "Where do you hide something from a black man?" he asks a white audience in the most cringe-worthy moment. "Under his work boots." Guffaws ensue, and Satin's self-loathing manifests itself in drug abuse and domestic violence. 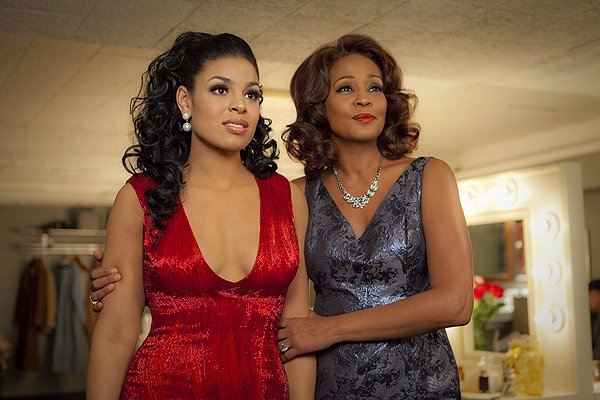 Sometimes you pick out these publicity stills and think "that's interesting" and then after you've looked at it for a while, you realise that it isn't.

While that might indicate that Satin has some depth, rest assured: He's a one-note villain who exists only to humiliate the good characters and physically punish Tammy for indulging in premarital sex circa 1968. Epps can be likable, but Satin isn't even allowed the depth of a charismatic abuser as he follows a character arc that takes him from despicable to monstrous.

The Akils don't stop at slut-shaming or shoehorning female characters into the virgin-whore dichotomy. As a film that celebrates virtue, the Akils seem to abhor the notion that a great singer can be easily upstaged by a good singer who exudes sexuality - that sex sells when the music doesn't. Characters bemoan this sad truth in early dialogue, and the white record exec bent on signing Sister and Her Sisters is so sleazy, he's played by none other than Curtis "Booger from Revenge of the Nerds" Armstrong.

OK, I can abide that moral outrage because objectifying bitches ain't really my thang. But why does the camera spend so much time lingering on Ejogo's goodies? It's one thing to build a film on ridiculously sex-negative conservative values; it's another thing entirely to slam a wrecking ball through that value system in a series of slo-mo closeups of ass wiggles that would put the twitch in Gucci Mane's fassbender. Why did I spend $10 at the box office when I could YouTube this on repeat for free?

After all, "Lemonade" is ten times better in every respect. Here, there's a clear difference between the genuine oldies (still fantastic), songs carried over from Sparkle '76 (meh) and songs written for Sparkle '12 (terrible). Try as he might, R. Kelly, who handles the songwriting this time around, just can't write songs that mesh with the classics. His efforts are riffs on Motown motifs, minus the hooks and soul, and, with one or two exceptions, they have very little to do with Sparkle's plot.

Wonky morality and R. Kelly aside, Sparkle ultimately fails as a musical. Attached to Sparkle are a bunch of trailers for upcoming musicals based on break-dancing, choir battles, etc., and then I wondered: When did Hollywood grow so cynical? With few exceptions (maybe one per year), musicals these days are actually revues because the suits don't trust us to empathize with characters who burst into song to advance the plot. Sparks may sing her ass off, but her character's inability to spontaneously burst into song because she can no longer contain her feelings - because she has no choice but to sing in a meadow or a field of daisies or whatever - is the true and final indicator of Sparkle's failures. This isn't a swan song for Whitney Houston; this is a death rattle.

MINORITY REPORT: The death of the musical on film perhaps reflects the success of stage plays like Mamma Mia and Rock of Ages, both of which are now major films. The idea of the truly cinematic musical, with huge, original song-and-dance numbers, seems to be a thing of the past. It's a damn shame, really, because we could do with about 100% fewer films like Rock of Ages. - Ian "Professor Clumsy" Maddison