Beasts of the Southern Wild

EXPECTATIONS: When you've been doing this "Internet Movie Guy" thing for a while, you start to realize that there are two types of movie-goers: "Film People" and "Normal People." Does this distinction make me a snob? Yes. Yes, it does. Or possibly a freak, depending on your point of view. But that doesn't change the fact that "Film People" have been going completely insane over this film for months, and I can't find a single non-cinephile with any interest in seeing it, except for one guy who inexplicably thought it was about stock car racing. (True story.)

This is only an issue because these two groups tend to dislike each each other in a ridiculous, internet-argumenty, we're-all-being-a-bunch-of-idiots type of way, and here at Current Releases, we have a tendency to do things that piss off both camps. It's like there's a war going on, and we're... Well, not Switzerland, but the opposite of Switzerland. Bizarro Switzerland. I have no idea where I'm going with this. Beast of the Southern Wild, everybody. 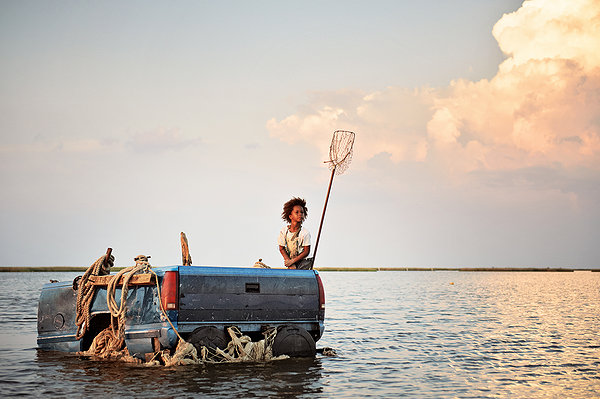 Pretty big for a bathtub.

REALITY: Part of the reason we have films, or art in general, is to look briefly at other cultures that we may not normally encounter. Because we don't necessarily understand every culture, some art may be confusing or potentially a little off-putting simply because we don't understand the cultural intent. For example, Beasts of the Southern Wild shows us a culture of dirt-poor, mostly Black individuals who are so proud of being poor and unschooled that they refuse any help to advance their situation, even when a natural disaster literally destroys their world. They proudly proclaim themselves to be animals, hence the "Beasts" in the title. Now, having this happen on screen may seem almost racist, but it's entirely possible that it's just being interpreted that way by my College Liberal, Lower-middle class, West Coast film critic sensibilities and ideals. Or maybe it actually is a little bit racist. Could go either way.

I'm getting ahead of myself, here. Beasts follows Hushpuppy (Quvenzhané Wallis), a little girl who lives with her father Wink (Dwight Henry) in "The Bathtub," an island community that doesn't represent the outer communities and ghettos of Louisiana at all, Wink-Wink. When The Bathtub is flooded in a storm that also coincidentally is not supposed to TOTALLY remind us of Hurricane Katrina, Wink and Hushpuppy refuse to evacuate. Instead, they band together with a group of their community members and build what's left into a sort of floating fortress. While the community rallies around their sheer stubborn refusal to move, Wink hides his terminal illness from Hushpuppy, who is also looking for her mom, and is also at times shown to be deciding which side of the Bathtub-Dry World debate she's on. Oh, I almost forgot, a group of ancient man-eating pig beasts that may or may not exist only in Hushpuppy's head are stampeding towards The Bathtub as well. Yeah, there is a lot going on here. 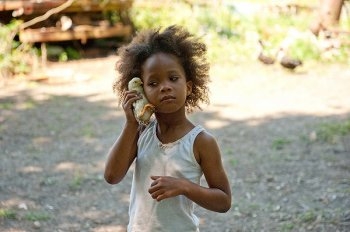 I'm pretty sure there's nobody there.Starting with the most obvious impressions, Beasts is a cinematic feast. The magical realism world that Writer/Director/Composer Benh Zeitlin has created is basically the closest you can get to capturing the feeling of a Miyazaki film in live action. Beyond that, Zeitlen proudly wears the influences of Terrence Malick, Terry Gilliam, and Guillermo Del Toro on his sleeve, and has created a project out of love. The passion that every person has in this film is evident, but I think special attention should be paid to the fact that Wallis and Henry are not experienced or professional actors, but the depth and strength they bring into their roles is unmistakable. On top of that, the score is a beautiful combination of Louisiana Bayou Jazz and ethereal fantasy music. It's been a long time since I've heard a score this perfectly in syncopation with the ideas playing on the screen.

When a film has this much good going for it, it feels nitpicky to point out the flaws, but I wouldn't be doing my job if I didn't point out that due to all of the different points floating around the film, the plot itself wanders around at its own pace, and honestly feels a little doddering at times. There are several points where you feel you're just watching to see where the film is going with this. Then there's the aforementioned cultural issue, which I believe is a case of misguided subtext.

The film really hammers in the connection that the Bathtub people have to the animal kingdom, and almost directly infers that Hushpuppy is some sort of reincarnated animal spirit. Hushpuppy's teacher makes the point that all animals and humans are made of meat. Hushpuppy's life begins with the death of an alligator. Another dead alligator is used by Wink to attack the levees set by the dry world. Perhaps most conflicting is a scene where Wink yells at Hushpuppy for using a knife to crack open her shellfish. He insists on having her rip the animal apart, to get in touch with her inner beast. I realize that the idea of saying a group has a connection to nature is nothing new, and that it's no more racist than the widely-accepted "Colors of the Wind" portrayal of Native Americans in film. (That is to say, still a little bit racist.) 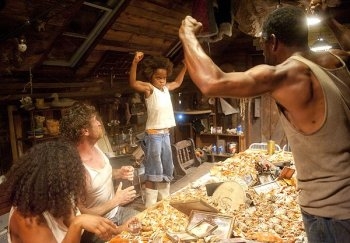 And so a future cast member of The Expendables 26 is born.The issue here arises when you take that subtext and combine it with the fact that all of the issues in the narrative come from Wink's pride and refusal to budge from his station. Wink is a morally ambiguous character for most of the film, so to have such a powerful statement as "Be a Beast!" come from him is making it really unclear whether we're supposed to support this idea or not. When Hushpuppy IS exposed to Dryland society, it's not portrayed in a good light, though I wish the film had done more to develop this idea. I could be completely off in this interpretation, but that's the beauty of a film like Beasts of the Southern Wild.

I mentioned earlier the distinction between Film People and Normal People, and how films partially exist to expose people to different cultures. That's what Beasts is. It's accessible and powerful enough for the average filmgoer to enjoy, but it leaves enough open for interpretation that nerds like myself can discuss its merits and demerits at length. (Note: "Merits and Demerits" would be an awesome name for a cable news commentary show.) The fact that many readers will disagree with me, and I hope they do, proves it. Beasts is an incredibly passionate little film that I hope everyone sees that has a chance, if for no other reason than to get a discussion going.

MINORITY REPORT: For all its low-budget realism and oddball cultural palette, I can agree that Beasts of the Southern Wild is not to be missed. It's an American fairy tale more relevant than anything Disney's produced in ages. And for what it's worth, it makes fried alligator look delicious. - Joseph "Jay Dub" Wade