EXPECTATIONS: What do 9, Igor, and Monster House all have in common (besides being kind of lame)? They are all late-summer animated horror adventures trying to repeat the success of Tim Burton's Corpse Bride. Laika Entertainment's previous film, Coraline, was surprisingly good, so I have high hopes for ParaNorman. I have to wonder, though, how this film is going to turn out with nary a Tim Burton or Henry Selick credit in sight... 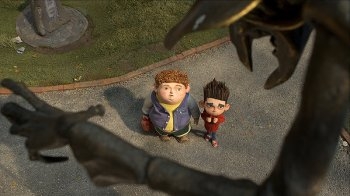 Nope, nothing creepy about this.REALITY: It's truly a rarity when an animated film can deliver an insane amount of fun while also dealing in heady, thought-provoking subject matter. That's a tough balance to strike, and more often than not films like 9 wind up tumbling into a pit of nonsense. When at the top of its game, Pixar can pull this off with ease. ParaNorman directors Sam Fell and Chris Butler have not only managed to outdo the animation in Henry Selick's Coraline, but have also created a smart film about the ways in which we deal with grief and honor the dead.

Everything seems normal in the town of Blithe Hollow; everything, that is, except for Norman (Kodi Smit-McPhee). Norman can see and talk to dead people, a gift that causes everyone in town to label him as a weirdo, including his own father (Jeff Garlin) and sister (Anna Kendrick). When the spirit of Norman's crazy, deceased uncle (John Goodman) appears to him and warns him of The Witch's Curse, Norman takes it upon himself to read from a special book in order to put the curse to rest. After a local bully (Christopher Mintz-Plasse, playing against type for once) ruins Norman's plan, the town becomes overrun by zombies, and it's up to Norman to save the town from tearing itself apart.

What needs to be said right up front is that ParaNorman isn't exactly the film being sold to you. Even my own plot summary is being a little disingenuous for the sake of not spoiling some of the story's better turns. What the ads are billing as a silly zombie comedy is actually a fairly straightforward horror story about a kid being forced to learn from and take responsibility for the terrible things that his town did three hundred years ago. 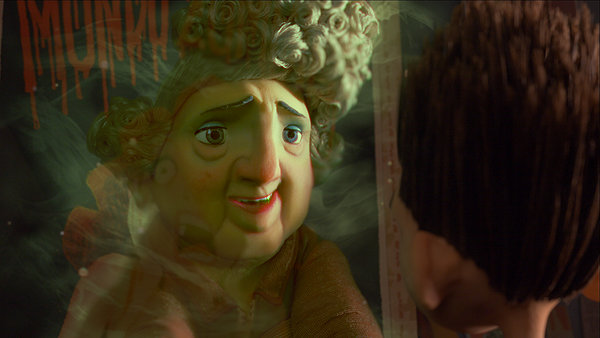 Oh, hi grandma. Haven't seen you for a while.

At the heart of ParaNorman is a mystery surrounding the trial and execution of a supposed witch. Three hundred years later, Blithe Hollow remembers the awful event by forcing uninterested children to stage school plays depicting the trial. Norman's own drama teacher even tells him the only reason they still do things like this is because it sells postcards. The town remembers the witch trial, but in a way they've actually forgotten what it was all about in the first place. When the zombies eventually show up downtown, nobody stops to consider who they are or why they're there; they've all been fed so many zombie movies that their only instinct is to kill first and ask questions later.

It might seems strange to suggest this of a children's film, but the way ParaNorman begs us to remember our history so as not to repeat it is strikingly reminiscent of Arthur Miller's aim in writing "The Crucible." While Miller's play never explicitly stated that it was about the Communist witch hunt of the 1950s, that's precisely what his Salem Witch Trial play was talking about. Similarly, ParaNorman makes sly use of horror movie conventions and hollow 'never forget' slogans to remind us that it is easy to forget the horrors we're capable of. Everybody has fears and anxieties, and the only way to save ourselves is to try and understand that fear instead of jumping to destroy the cause of it.

Oh my God, it's a homeless person! Don't give him money, he might spend it on crack drugs.Norman copes with that fear by retreating inward. Talking to dead people has to be emotionally taxing, so Norman becomes a very quiet sort of kid. He loves watching horror movies, and he seems merely to tolerate his dead grandmother watching along with him. On the flipside is Norman's fellow outcast Neil (Tucker Albrizzi), a fat kid who shrugs off all of his grief with a "Keep on truckin'" sort of attitude. Bullies call Neil fat, but he just brushes it off. His dog was hit by a car, but that doesn't stop Neil from playing fetch with what he thinks is the dog's spirit (actually, this might be the most depressing image in the whole film.) Each of the film's characters is rounded out just as well as these two, and it makes the town of Blithe Hollow come alive. This is a town full of what may well be real people and real anxieties, something that Coraline achieved as well, but here becomes a crucial aspect of the story.

It must be stressed at this point that, for as heavy as I'm probably making this film sound, ParaNorman never stops being a joy to watch. From the physical comedy involving the zombies to the absolutely stunning animation work, there isn't a second of this film that isn't at least entertaining to look at. Laika has done a magnificent job at bringing this creaky old New England town to life, and the character animation is easily the most polished a stop-motion film has ever looked. The film isn't as funny as it perhaps could have been, but when you're dealing with a story about remembering a real-life witch hunt, there isn't much room for laughter. Nevertheless, ParaNorman is easily one of the year's best films, despite a ridiculous late-summer release that promises it'll be gone just in time for Halloween.

MINORITY REPORT: Nice try, kids, but next time you want to make a stop-motion horror comedy, do it right. Put some black paint on something, involve Christmas somehow, get Helena Bonham Carter involved and make Danny Elfman do that kooky oom-pa-pa oom-pa-pa weedleweedleweedle thing he does. Christ, what a bunch of unimaginative amateurs. - Tim Burton