EXPECTATIONS: There are a handful of things I'm not sure how we, as a society, still find funny here in the Year of Our Lord 2012. Things like dudes wearing dresses, mother-in-law jokes, and anything Dane Cook says. Topping that list is this bizarre idea we have that people in their fifties and sixties having *gasp* sexual relations is in any way funny or even noteworthy. Older people do have sex. There is an entire division of pharmaceuticals devoted solely to making that happen. I'm sure that there are some statistics, which I'm too lazy to Google, that show that senior citizen couples actually have way more sex than their younger counterparts. Or maybe they just have way more sex than me. In any case, I'm pretty damn doubtful that this concept can carry an entire film.

REALITY: The internet has given every man, woman, and child on the planet a voice to be heard, and apparently we all chose to use that voice to argue about movies. Everyone is a film expert now, except I'm obviously more of an expert than everyone else, because I have this website and they don't, neener neener neener. Anyway, one of the buzzwords that has been making the internet-movie-people rounds lately is "tactical realism," wherein people get upset at films because things work differently in movies than they do in real life. This is taking "How does John McClane know which way to go in that air duct?" to a whole new level, wherein people actually start hating films because they don't explain how a character got from one place to another in the third act. The reason I bring this up is that Hope Springs, a film that "tactical realism" proponents will never see, is a perfect example of why film realism is highly overrated: Realism Is Boring. 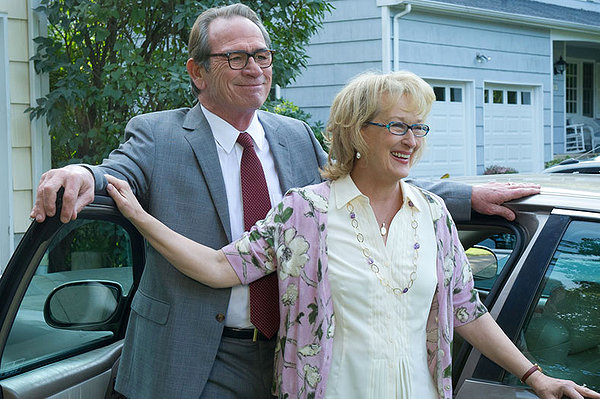 They seem happy enough to me, they clearly don't need counseling.

This is the part of the review where I generally give you a recap of the movie's plot, so here you go: Arnold and Kay (Tommy Lee Jones and Meryl Streep) have been having marital problems, so they go to a famous couples' counselor (Steve Carell) for help. He tells them to try some things, so they do. At first it doesn't seem to work, but then it does. That's it. That's the whole movie. I may be oversimplifying the film, but if I am, it's not by much.

There are moments where the couple reveals details of their past that led them to sleeping in separate beds, but they are few and far between. When they do happen, however, the leads are allowed to really let loose and build an amazing amount of chemistry. Meryl Streep is Meryl Streep-good, and Tommy Lee Jones continues to communicate through a series of grizzled grunts. I'm having a hard time praising Carell's performance, because it's just so monotonous and one-note. He doesn't change his inflection once through the whole film. On the other hand, that same flat, calm, almost condescending voice is exactly what a marriage counselor is supposed to sound like. So while his performance is accurate and proficient, that isn't enough to make it interesting or enjoyable in any way. That can pretty much be said of the entire film. 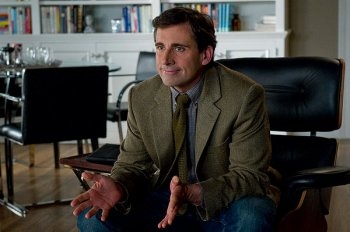 Is it just me or is Steve Carell looking more and more like Mr. Bean as he gets older?Almost every bit of praise I have for this film is also a damnation in a way. For example, I want to make a special note of the way this film handles discussion of sexuality. We have to realize that this is a film aimed primarily at an audience that has been told that sex is a dirty thing we don't talk about, and here we are, discussing fantasies and orgasms in a professional manner. For a long time. In fact, it's almost too clinical in its treatment of these subjects. That's right, this film actually manages to make sex talk uninteresting.

Finally, we get to the PG-13 make-out scenes with Jones and Streep. I feel it's important that these scenes be treated the same way that a sex scene between two younger actors would be, and they are. Unfortunately, by the time it happens, I'm just so disinterested by the whole thing that my only thoughts on the matter are "Meryl Streep has great skin for a woman her age."

I will say this for Hope Springs: It uses product placement in a way that I wish more films would, to create a sense of setting. While at home in Omaha, Kay works at Coldwater Creek and goes shopping for relationship-advice books at Barnes & Noble. The signs on these storefronts are even prominently displayed. If you want to tell your audience that two characters are as bland and white-bread as possible, I can't think of any better method than putting them in a Coldwater Creek in Nebraska. There's even a fun little contrast when Kay goes into a mom-and-pop bookstore later and interacts with an actual human being. It's not enough to actually say anything or make any kind of point, but at least it's something.

So, there you have it folks: This film sets out to be incredibly realistic, and it succeeds. I did not have to suspend my disbelief once. I fully believe that this is what a certain type of couple going to a certain type of counseling looks like. If the goal of this film is to help failing couples get help, it does so by making them say "Geez, at least we're not that lame." There's not really any reason for me to want to watch that.

MINORITY REPORT: I suspect that many cast members from Expendables 2 have dabbled in some of those specialised pharmaceuticals you mention. Also, we seem to have developed a running theme about that very thing, so clearly some people in 2012 are still laughing, even if it's just me and Sean. - Ian "Professor Clumsy" Maddison