EXPECTATIONS: I always love getting the assignment of the week that no one's heard of. It's a lot like playing Russian Roulette. Not that I love playing Russian Roulette, mind you, but when Ian forces me to play, I much prefer winning to losing. This week I was given a choice between taking a chance and forcing myself to suffer through the dueling shticks of Jack Black and Owen Wilson. I decided to play the game, and let the new guy take the hit. "I'm not new!" he yelled through the office. "I'm a founding member! I was here before you were!" New guy whines a lot. 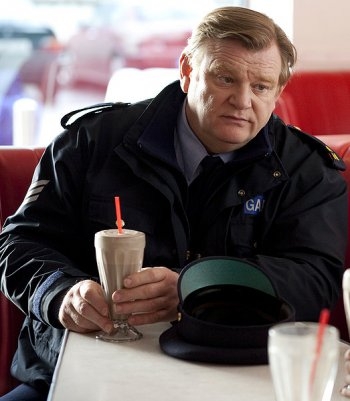 This review is distracting me from my milkshake.REALITY: One's an unorthodox streetwise police sergeant. One's a straight-laced by-the-book FBI agent. Together, they fight crime! Or they would, at least, except Sergeant Gerry Boyle (Brendan Gleeson) doesn't really give a damn either way. That's what makes his character so great, and that's what makes The Guard work as a movie. There is great power in a man that just does not care, and it makes for a fun protagonist.

The film starts with Boyle and his rookie partner (Rory Keenan) investigating a strange murder with religious undertones. At the same time, FBI Agent Wendell Everett (Don Cheadle) rolls into their quiet seaside Irish village to catch a drug smuggling ring that's bringing a shipment into port. Unsurprisingly, the two are related. Even less surprisingly, Mark Strong is the bad guy. The fun part is, despite Wendell's best efforts to get him involved, Boyle has no interest whatsoever in solving the crimes. One of the best scenes in the film occurs when Wendell starts detailing a plan of action for the day, and Boyle shuts him down simply by saying "It's my day off." Then he goes and has his day off. It's glorious and hilarious, and Cheadle's flabbergasted expression marks one of the best performances he's ever had.

Cheadle's strict FBI Agent is the perfect straight man for this job, but he's a smart enough actor to realize that this is Gleeson's film, so he slides into the background instead of attempting to share the center of the screen. (Not that he could, anyway. Brendan Gleeson is a very, very large man.) This is one of the best buddy-cop movies to come along in a while, because Gerry Doyle is one of the most entertaining characters in this genre for some time. Doyle is a casual racist, a drunk, and a whoremonger. He's also quite good at his job, incredibly athletic for his size, and quite sensitive when it comes to taking care of his dying mother (Fionnula Flanagan). He's a remarkably complex character hiding behind a straightforward Irish cop caricature. Also, at one point in time, you think he might be the devil incarnate. No joke. 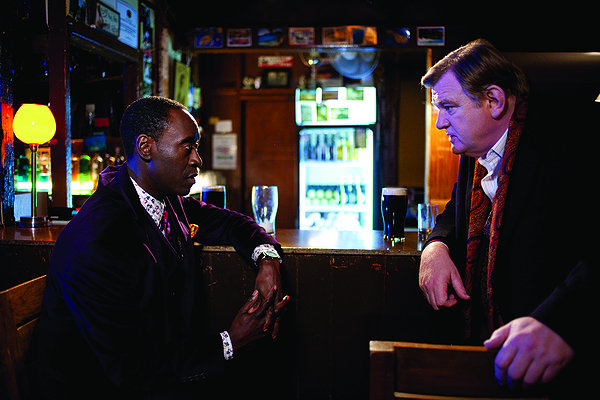 So an Irish guy and a black guy walk into a bar... oh, hold on *looks around, sees nobody, resumes talking*

Stylistically, rookie director John Michael McDonagh wears his influences on his sleeve. The movie is basically Hot Fuzz played straightforward, with Nick Frost's character as the action hero. It also borrows heavily from Gleeson's other brilliant crime film In Bruges (which was directed by McDonagh's brother Martin McDonagh), and it lifts a gag straight from Kiss Kiss Bang Bang. This is not a complaint, but a note of warning. Your enjoyment level of The Guard will depend entirely upon how much you enjoy the movies I just mentioned. Unfortunately, as a result of him trying to emulate this style, McDonagh's script falls flat on occasion. With the exception of the always-entertaining Mark Strong, the melancholy, Nietzsche-quoting drug runners come across like someone trying too hard to imitate a Guy Ritchie movie. Guy Ritchie isn't even very good at imitating Guy Ritchie anymore.

Then there's the fact that the movie has a giant red herring that doesn't work because it's never addressed or even mentioned in the time between when it is introduced and when it is explained. It doesn't work to throw us off a trail we were never on to begin with. Despite this, it's somewhat okay that the details of the plot are sketchy, because as the audience, we don't care about them. We care about Gerry Doyle, and he doesn't care about the case at all. He doesn't even care when his partner goes missing. He cares when they come after him, and so do we. The ending of the film leaves the chances of a sequel ambiguous, leaning towards unlikely, but I loved Gleeson's performance, and Doyle is definitely one character I'd like to see for another two hours.

MINORITY REPORT: So this is basically a remake of Lethal Weapon, only Danny Glover is the main character and he's been replaced by a fat, lazy Irishman? Sounds good! - Ian "Professor Clumsy" Maddison