EXPECTATIONS: Very few. I haven't seen the trailers, but the poster pitches The Big Year at an audience for whom Grown-Ups was too edgy, which should tell you all you need to know about The Big Year.

REALITY: That The Big Year and Something Awful can exist in the same universe is a testament to the diversity of the human experience. As such, if you're a regular reader of Current Releases, the gist of my review is simple: This film is not for you. For those of you who stumbled here by accident and like their harmless dramedies stitched together with simple profundities--if you like Christmas sweaters and equate spicing things up with keeping the nightlight on--read no further than this word of caution: This movie is best viewed with blinders on, and don't you dare look past the surface. If you start digging for flaws in The Big Year, you're likely to create a rabbit hole from which you'll never return. Fair warning. 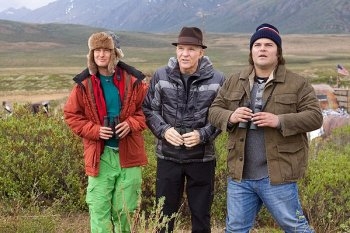 Exciting action!In this politely charming riff on buddy comedies and nature docs, a trio of birders (apparently, the term bird-watching is out of vogue in Audobon salons) engages in a possibly fictional competition: To spot the most unique birds in a calendar year. Or, as 20th Century Fox puts it in the press packet, "Steve Martin, Jack Black and Owen Wilson are at a crossroads -- one is experiencing a mid-life crisis, another a late-life crisis, and the third ... a no-life crisis. From David Frankel, the director of The Devil Wears Prada and Marley & Me, comes a sophisticated comedy about three friendly rivals who, tired of being ruled by obligations and responsibilities, dedicate a year of their lives to following their dreams. Their big year takes them on a cross-country journey of wild and life-changing adventures." Yeeeaaahhh, it's that kind of movie. The kind of movie Fox doesn't seem to know how to market because its target audience is the family that buys a ticket for a random movie--PG only, thanks!--and smiles wanly at whatever's happening on the giant screen in front of them. The kind of movie to which they attach trailers for We Bought a Zoo, in which Matt Damon buys a zoo to give his kid(s) "an authentic American experience," and Happy Feet Two in 3-D, in which a dancing penguin takes a fucking fly at a rolling glacier while Robin Williams cracks wise. (Strangely, the only decent trailer, for The Muppets, savages a cliche employed by its feature.)

Given the poster and Fox's clever little pitch, one could easily piece together the plot of The Big Year. The aforementioned "friendly rivalry" ebbs and flows as Martin & Co. navigate their way through situations only the white and severely deluded would qualify as crises. Martin, as the wealthy yet generous executive who has prioritized his business over his happiness, must choose between bird-watching or working until he's Yoda's age; Wilson, as a cocky prior champion who refuses to be bested, must choose between bird-watching or making babies with his attention-starved wife; and Black, as a driven challenger to the throne, must choose between bird-watching or appeasing his working-class father (a severely emaciated Brian Dennehy), who's correct in assuming that a year of bird-watching for no monetary prize or mainstream glory is the dumbest fucking dream in the long, long history of dumb fucking dreams. Will Martin miss the important business meeting for the chance to spot a rare owl? Will Wilson miss his wife's turkey-baster insemination for the chance to spot a different rare owl? Will Dennehy succumb to dementia and learn to appreciate his wayward son's obsession--maybe even accompany him on a trip to spot a third rare owl? How long can this movie go on before one begins to wish everyone in the cast would die of avian flu? 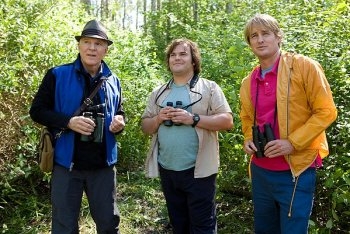 Diverse visuals!Granted, a severely misguided disclaimer informs The Big Year's severely misguided audience that, while it's a true story, all the facts have been changed (someone'd better be asking some hard questions about the nonfiction book upon which this film is based), but in what kind of world does Black get to bang Rashida Jones on the strength of his ability to identify bird calls? (Jones, with her ability to make bird-calling something bordering on sexy, is the lone bright spot here.) Movies this shallow and inconsequential defy rational analysis; no statement could accurately describe the misery a reasonably intelligent viewer would endure while in The Big Year's frail grasp, especially when the ingredients for a significantly better movie are evident: Namely, a stellar comic cast that also includes Dianne Wiest, Kevin Pollak, Joel McHale and Tim Blake Nelson, and the sort of ridiculous premise with which Christopher Guest or Errol Morris would have a field day. How the year's best comic ensemble could appear in such a wriggling, pale miscarriage of cinema will remain one of 2011's great mysteries.

Oh, but wait! There's slapstick! Black recoils from a rat that scurries past his windowsill! Frankel, "the director of The Devil Wears Prada," recreates a scene from The Birds! And Martin and Black are outsmarted time and time again by Wilson, who has never seemed smarmier than when he tricks them into running downhill to chase the birds up--that rascal, they'll get him next time for sure! And, lucky you, captive viewer: Hijinks of this sort, and the situations onto which they're grafted, replay again and again for some 90 minutes, leaving 10 for the merciless crawl of the credits, paced slowly because a) half of the audience is old and possibly blind, b) projectionists have nothing better to do, and c) the filmmakers have assembled a slideshow of Polaroids, The Hangover-style. But instead of some crackwhore munching on Zach Galifianakis's fake black cock, we get birds. A lot of birds. After a movie that's filled with shots of birds--so many birds, one begins to wonder why they decided to split the difference between shitty comedy and second-rate Nova specials. The Big Year does for the nature doc what the American Pie Presents... series did for porn, confirming that time-honored imperative: Go hard or go the fuck home. If you want to see tits, don't muddy the waters with Z-grade comedy, and if you want to see birds, donate money to PBS instead of pitching dollars into Finkel's shit-brown coffers.

Also, a special note to Steve Martin's makeup artist: How exactly did you take a refined, dignified star like Steve Martin and make him look Claymated? How do you sleep at night, sir?

MINORITY REPORTS: In a sane world, this would be a Christopher Guest film about Eugene Levy trying to convince America that vampire bluebirds are a real thing. Sadly, this is not a sane world. - Joseph "Jay Dub" Wade

I hope this trend of making bird-watching movies continues. I'd like to see... more movies... with people watching birds, I guess. I don't know. - Martin R. "Vargo" Schneider