EXPECTATIONS: I think I'm okay with a remake of The Thing, in principle. John Carpenter's 1982 film was a remake itself, and it was disturbingly different from the 1951 original in the best way possible. My worry is that 2011 filmmaking is still so tied to the 1980s mode of filmmaking that this version won't be able to forge its own identity. Then again, I get the feeling that making this a prequel to Carpenter's film is just an excuse to copy it verbatim anyway. Hopefully they'll treat it as something to aspire to rather than just fodder for a shameless rip-off. 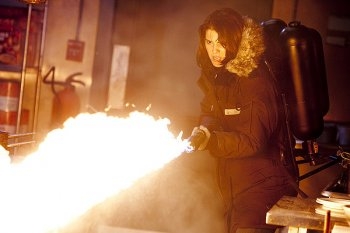 Crowd pleasing!REALITY: Deciding to make this a prequel to the John Carpeter film makes it damn near impossible to discuss independent of itself. And since most people have caught on to the idea that the creature itself is a metaphor for grotesque mimicry, it's hard to say that this is a pale imitation without flat out saying so. 2011's The Thing mimics the plotting and paranoia of its predecessor, but it also attempts a handful of new ideas to set itself apart. Some of them work, some of them fail miserably. It's sort of like watching natural selection play out in movie form.

This film is a prequel in that it's all about what happened to the Antarctic base that Kurt Russell & friends discovered in the previous film. It's 1982, and a team of Norwegian scientists happen across an alien spacecraft that's been trapped in the ice for thousands of years. Paleontologist Kate Lloyd (Mary Elizabeth Winstead) is brought down to investigate a frozen creature found near the crash site. As the team members (among them Joel Edgerton, Eric Christian Olsen and Ulrich Thomsen) celebrate their alien discovery, the Thing smashes free of the ice and begins eating people. Kate soon discovers that the Thing can mimic its prey, and that any of the base's residents might not be human. One by one, people start dropping like flies, and most of the Things that appear in the film eventually go up in flames.

As far as horror films go, this is about as mixed a bag as you're ever likely to find. For every genuinely clever or interesting turn The Thing takes, there's a horrible misstep that threatens to destroy any goodwill it's managed to build up. Mostly this involves making a lot of the same mistakes that most bad monster movies make, such as making the Thing stalk someone from around a corner and forcing it to roar whenever it's revealed.

Chief among these problems, though, is that we see far too much of the Thing itself. In the '82 film, the Thing was little seen, but what we did see was a horrific amalgamation of human body parts, tentacles and teeth upon teeth. That film sported some spectacularly disturbing creature design, and while I'm not going to waste this space lamenting the death of practical effects, I will say the new CGI version of this monster is utterly incomprehensible. The best way to describe it is basically "vagina dentata plus tentacles". After a while, the thing stops being terrifying and becomes a shrieking, annoying blob of a monster that I wish someone would just torch already.

The film plays with the concept of paranoia in a couple interesting ways, but winds up explaining its rules to us in fairly short order. The result is that we know exactly which cues to keep an eye out for in figuring out who is a Thing and who isn't. The second act, where all of our characters are trapped in the base, subverts this by laying down explanations and incidents on top of one another such that we really have no idea who is supposed to be human and who is supposed to be a tooth monster in disguise. In the moment, it even leads to confusion in the viewer, as I wasn't entirely sure which characters to trust, or if we were even supposed to trust the rules they had laid out.

It's not the size of the drill.This dynamic makes for an interesting little witch hunt for fifteen minutes or so, but then the Thing apparently gets tired of hiding and cuts loose (footloose) in suitably gruesome fashion. Once this happens, the movie drops all pretense of subtlety and starts destroying human bodies at an alarming speed. During this scene, we get to watch the Thing eat someone by melting its face across their face in order to consume/kill them. Coupled with an ear-splitting wail of Aguilera-esque sharpness, this is the closest the film ever comes to matching John Carpenter for unsettling terror.

You have to hand it to Dutch director Matthijs van Heijningen, Jr. He really commits to making this film look and feel as much like its predecessor as he possibly can. When the tension works, it works fairly well. When it doesn't, it's because the film is either aping and/or trying to subvert what's come before. He does wind up shooting the film in its foot by recreating the beginning of the Carpenter Thing at the end, but by this point it's made pretty clear that The Thing 2011 is leaning on The Thing 1982 like a crutch, so you may as well watch them back to back. But since they're practically the same film, what's the point? You'd get more mileage out of having them both running at the same time and taking a shot every time the two screens match up.


The Thing is a success in tone, but a failure in narrative. It suffers from the same problems that most prequels run into, and it fails to add anything new to the equation. For anyone wondering what happened to the abandoned base seen in Carpenter's film, this one has the answer: The same damn thing, but with more explosions. You love explosions, right?

MINORITY REPORTS: Elusive things, Things. If you have a thing you think may be a Thing, you have to keep your eyes on that thing and the things that the thing does. If any one thing that that thing does is like a thing that a Thing would do, best just to burn it and make sure. - Ian "Professor Clumsy" Maddison

I hope this trend of prequel-remaking '80s John Capenter movies continues. I'd like to see a prequel-remake of Escape From New York with Chris Pine as a gentler, more sensitive Snake Plissken. - Martin R. "Vargo" Schneider


Just gonna leave this cool link here. Someone who might find it especially relevant is the 'supervising foley artist' for The Thing 2011, one GARY A. Hecker ... or should I say, THE THING? - Andrew "Garbage Day" Miller