EXPECTATIONS: Back in the before-times, when video rental stores still roamed the earth, sometimes you would experience the bizarre phenomenon I referred to as "Rentality." Rentality occurs when a rental patron walks in to their store with nothing particular in mind, usually with a group of other people. After half an hour of wandering around, trying to figure out "what you're in the mood for," someone grabs a DVD out of the corner that no one's ever heard of. It has some semi-famous people in it who have been in stuff you don't hate; it looks like it could be kinda good, maybe; and because no one's even seen a trailer for it, no one can complain. So you take it home, and roughly 87% of the time the movie is terrible, but every once in a while you come up with a gem that you spend the rest of your lives convincing others to watch. Having movies assigned to you every week is a bit like this, and I'm hoping Butter will be one of those rare moments where a total stranger becomes a warm friend. 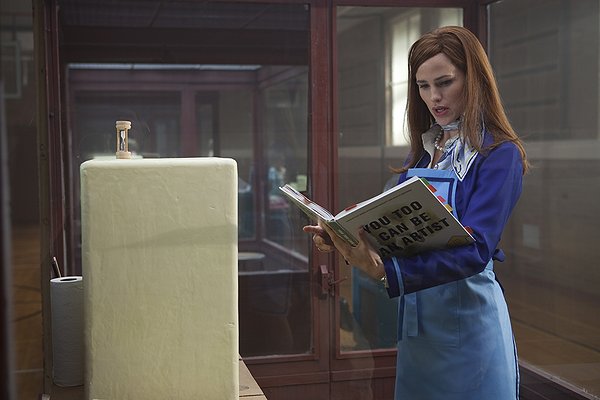 I mean, it wasn't like a total stranger took me out back and beat me, either. Butter is the cinematic equivalent of some dude on the street asking you what time it is. It's entirely inconsequential, completely forgettable, and has no impact on your life except to make you wonder why, in this day and age, such a thing is even necessary.


Butter takes place in a part of Iowa where, for some reason, everyone is simply mad about butter sculpting. That is, taking giant blocks of butter and making sculptures out of them. I have no doubt that this is actually a thing some people do, and if they're going to do it anywhere, it would be Iowa. After winning fifteen consecutive butter competitions, reigning king Bob Pickler (Ty Burrell) is asked to step down and not compete anymore. Bob agrees, and with his weird butter hobby gone and his marriage to trophy wife Laura (Jennifer Garner) in shambles, Bob does what many men in his situation have done: He bangs a hooker (Olivia Wilde) in a strip club parking lot. A hooker he doesn't pay, mind you, so that Olivia Wilde has a reason to keep being in this movie.

Anyway, Laura decides that she should be the one to assume the butter-sculpting crown, and the hooker enters too because hey, Laura sucks. Meanwhile, a cute little black girl (Yara Shahidi) is adopted by a very white couple (Rob Corddry and Alicia Silverstone) and she's also a butter-sculpting prodigy. This entire premise is so stupid I can't even go any further with this. 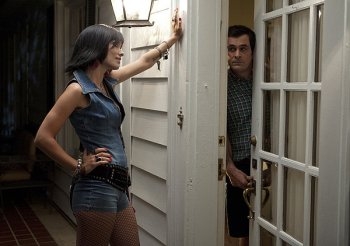 I hte it when prostitutes cold call at meal times.Butter is the least interesting film I've seen all year. Seriously. Even The Cold Light of Day was noteworthy in its unworthiness. This is a film as bland as its titular dairy product, which is surprising for a film that loves pointing out that its main character hates poor and Black people. I wish this were a documentary, to be honest. Or a Christopher Guest-style mockumentary. I could watch two hours of weird people carving butter easily if any of them were unique or entertaining in any way. Instead, my critical process here stretches from "Who decided to let Rob Corddy play the loving father figure?" all the way to "Oh, I guess he's not bad at it." Thrilling, thrilling stuff, folks.

Hiding behind a big ol' [citation needed] on the movie's Wikipedia page is the idea that this film is supposed to be a satire of the 2008 Presidential Primary. Yeah, okay, I can see that. You've got the wife of the guy that everyone loves despite his cheating, versus the young black golden child that seems to come out of nowhere and is named, not kidding here, Destiny. And it takes place in one of those like three states that decide every election because of our ridiculously stupid system. Good job, you've made a movie making fun of an election with what seems to be a child's level knowledge of it. What are you actually saying about it, though? Nothing. Nothing at all. You're just telling us "Hey, here's a thing that's vaguely like another thing. Isn't that weird?" It's like a political cartoon. (Honestly, if this were a political cartoon, it'd probably win a Pulitzer. Hell, Michael Ramirez has two.)

There's no point to that political analogy. There's no point to any of this. It's not funny, but it's not offensively unfunny either. It is basically a film that exists, but really only barely. There is a pretty funny song about butter that plays over the credits, though. So, y'know. There's that.

MINORITY REPORT: I'm actually composing this Minority Report from a street festival offering all sorts of horrifying butter products. Judging from the grotesqueries I've seen today, Butter sounds like exactly the kind of movie that might premiere at a butter fair, because hey! It's butter! - Joseph "Jay Dub" Wade