EXPECTATIONS: Taken is, I think, one of the most misunderstood films of the past decade: It's a brazen French satire on America's approach to international relations wherein a man with the power and ability to do good doesn't ever do anything good until something close to him is threatened, after which he responds without a care for collateral damage. Now we have a sequel revolving around a revenge plot in the same world with the same characters, turning the situation in on itself. It could end up being even better than the original if they play their cards right. 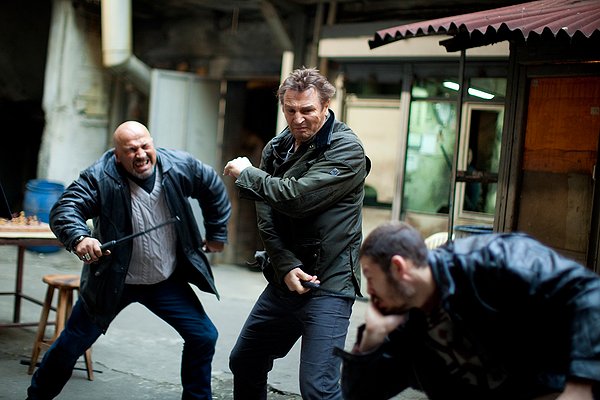 The super-convenient "Nobody has a gun" scene.

REALITY: I guess playing your cards right is hard to do when you keep getting dealt the same hand. Taken 2 tries and fails to step up its game from its kinetic and subtly amusing predecessor and leaves us with a film that hits a lot of the same notes and rehashes a lot of the same ideas with a lot less subtlety and a lot less panache.

When Bryan Mills (Liam Neeson) takes a hotel security job in Istanbul, his daughter Kim (Maggie Grace) and ex-wife Lenore (Famke Janssen) decide to surprise him by showing up at the hotel for a holiday. It just so happens that the very next day, vengeful relatives of the bad guys Bryan killed in the first film come and kidnap both him and Lenore. Now he must murder the entire population of Eastern Europe so that he can continue his safe life in America. 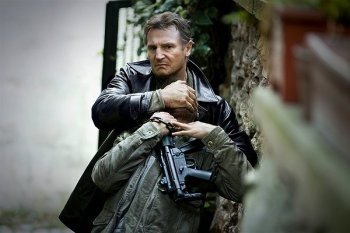 That's what you get for asking if Liam Neeson has hair plugs.Obviously it's slightly more elaborate than that, but that is the basic gist. A large section of the film has Bryan talking to Kim on the phone, explaining what he wants her to do in order to aid his escape. He has her draw two circles on a map and asks if they intersect at any point. "Yes, two points" she replies. "Then I'm at one of those two points" he explains. Bryan's foolproof plan continues with Kim throwing hand grenades off the Istanbul rooftops without hurting anyone or arousing any suspicion. Bryan's specific set of skills can be transferred over telephones, it seems.

In one scene, Bryan retraces the steps of his kidnappers by listening to the sounds in the streets around him. Good thing that old guy was playing his weird violin for hours in that alley outside their headquarters, eh? In the end, he knows he's at the right place because he sees a man in a leather jacket smoking a cigarette. Better murder him with a chain, just to be sure. In fact, Bryan murders absolutely anyone in a shell suit with extreme prejudice. He even shoots a police officer to death to save time!

You see what I mean now about this film ditching the subtlety. And this isn't like The Expendables where subtlety stood in the way of the film's tone. Taken was a film that reveled in the silliness of its genre trappings while poking subtle fun at the society that could produce them. Taken 2 brings that fun-poking to the foreground and makes it much more blatant and overt. It is funny, don't get me wrong, as Bryan's antics descend further and further into zany silliness; but it's all the same jokes as last time, just shouted a bit louder and thus robbed of their power. 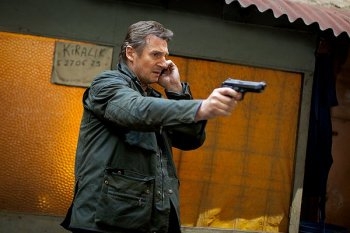 Just a second, honey. I need to shoot this guy.This film has none of the iconic scenes or surprises of Taken. That unforgettable phone call from the first film in which Bryan explained to his daughter's kidnappers, in no uncertain terms, that he will look for, find and kill all of them, is never matched. Obviously, that's the kind of lightning in a bottle that is hard to replicate, but nothing here comes close to even looking like it's trying. You enjoyed that phone call? This film has a whole morass of phone calls and "Listen to me very carefully" has now become Bryan's wacky and hilarious catchphrase! Everytime we hear it, we know he is about to explain - with extreme specificity - something completely ludicrous.

After a while, it becomes apparent that this is nothing but self-parody. This is the Gremlins 2: The New Batch to Taken's Gremlins. It's Evil Dead II: Dead by Dawn to Taken's The Evil Dead. The Bride of Frankenstein to Taken's Frankenstein. Don't let that get your hopes up though, Taken 2 is not as good as any of those by quite a wide margin. In fact, the film spends a lot of its time standing in the shadows of much better, more interesting films. At two points in the film, we hear segments from the soundtrack to Nicolas Winding Refn's superb Drive. Given Taken 2's subdued approach to its violent content, all done in an effort to please the censor, we have to wonder if director Olivier Megaton really just wanted to make Drive for 13-year-olds.

The real shadow that hangs over this entire project, though, belongs to Taken. That film surprised everyone with its biting satire and ferocious action. This sequel attempts to throw out the rule book, but never goes far enough in any direction to make it stick. The action, aside from a sparse few set pieces that draw loving attention to the action-movie-contrivances they seek to parody, is never as ballsy or insane as anything in Taken. You won't be bored at any point while watching, but give it a few hours afterward and see if you remember any of it.

MINORITY REPORT: Apparently Olivier Megaton has just decided that his "thing" is going to be making Luc Besson movies without any of the good stuff Luc Besson does. Stay tuned for Olivier Megaton's The Sixth Element in which no one goes into space, there are no pop stars, and nobody wears the band-aid dress. Gary Oldman still stars. - Martin R. "Vargo" Schneider