EXPECTATIONS: As a fan of Glee and a straight male who admits to having enjoyed both Bring It On and Step Up, you'd think Pitch Perfect would be right up my alley. But something about the trailer rubs me the wrong way. Maybe it's the (lack of) comic timing. Maybe it's the musical numbers. Maybe it's Rebel Wilson screaming "I've been shot!" after a drive-by chili-dogging. Maybe it's the rape whistle joke. Maybe it's all of those things at once, or maybe I'm just really cautious about building any sort of enthusiasm for Pitch Perfect because I might end up liking it, thereby forcing myself to admit to the world that I like these bubbly confections. Oh ... too late.

REALITY: For me, the highlight of Pitch Perfect came at the 90-minute mark, when I accidentally kicked a theater patron in the head on my way to an emergency shit. And as I sat on that toilet, I pondered hanging up my critic's hat, walking away from the theater into the frontier over the plains and eking out a life riding the rails. I always wanted to join the circus. What's Canada like this time of year? I checked my watch and thought, "Well, I've already invested 95 minutes into this film. Might as well see how it plays out." 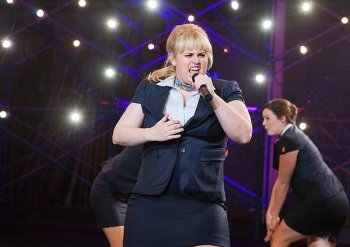 Consider 18-year-old Beca (played by 27-year-old Anna Kendrick) and her central dilemma: She wants to move to L.A. and be a DJ. (DJ White Power, DJ Stormfront or DJ Sarah Palin's Alaska? Whichever one isn't taken.) However, her SUV-driving tenured-professor daddy won't pay for it until she spends a year enjoying an absolutely free ride through the college at which he works. She wears black eyeliner, so the other characters perceive her as "alternative." She discusses her issues with daddy over steaming cups of coffee on a kitchen island near a bay window through which gorgeous scenery pours in. She misses her first day of class, with no apparent consequences. She uses her MacBook Pro to make the lamest mashups. She's surprised when she finds another student who's heard of David Guetta. A real tortured soul, this one.

We meet our first Asian character, Beca's Korean roommate who doesn't seem to like her. We never get to know this roommate, because the joke is she's awkward and inexplicably hostile. (Pitch Perfect has something against Asians.) While her dad bugs her to give college the old college try, Beca chooses the lesser of two evils and decides to attend a first-week clubs fair with her Korean roommate, who -- we're reminded again and again -- hates her. She stares wistfully at her roommate as she approaches the Korean student group and finds like-minded Koreans who welcome her with open arms while poor little Beca stands alone in the quad with nary a complementary soul in sight.

This reminds me of a conversation I had in which a white woman was simultaneously a) claiming that ethnicity-oriented student clubs ghettoize their target demographics and b) complaining about the lack of clubs geared toward white people. Man, if only white people had clubs, right? Instead of joining the KKK or the Aryan Nation, because those pinko touchy-feely faggots running this fictional university no doubt look down upon extremist groups, Beca finds the next best thing: The Bellas, an a cappella group dominated by like-minded white women. Or not so like-minded, considering they're bubbly and cheerful and Beca is, like, totally two steps away from suicide.

See, The Bellas are hurtin' bad after their prissy leader, Aubrey (Anna Camp), projectile-vomited beans into the audience at the previous year's national semi-finals. Aubrey and Chloe (Brittany Snow) are the only members, and they're willing to take anyone. Who do they get? Fat Amy (Rebel Wilson), who gets the best line when she explains that she calls herself Fat Amy "so twig bitches like you won't do it behind my back." Based on that early joke, you'd think Pitch Perfect might be progressive and possessed of a nuanced attitude toward facile fat jokes. Well... you'd be wrong! While Wilson should be commended for her commitment to the character, for her willingness to make light of her weight, the sheer number of fat jokes aimed at Fat Amy grow rather nauseating. Her character's weight is her defining trait. She has no complexity. She has nothing else to offer. 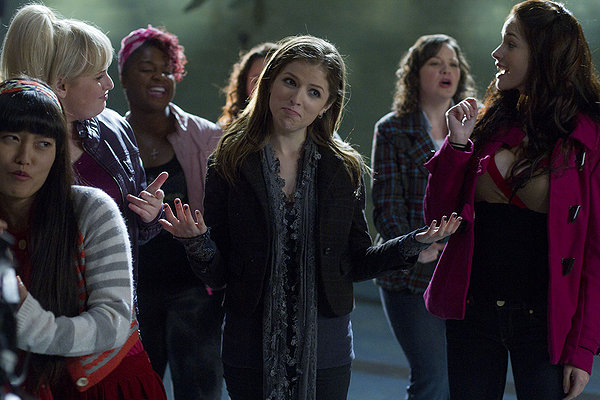 The Birth of a Nation, a capella style.

They also recruit a handful of generic white vocalists who get maybe one line each as they provide a backdrop to Fat Amy; Cynthia Rose (Ester Dean), a lesbian who becomes the butt of more than a few lesbian jokes; and Lilly (Hana Mae Lee), a quiet, weird Asian girl who draws laughs only by being quiet and weird -- oh, and eventually for slipping in a comically large puddle of vomit and making snow angels, as if this were the most natural response in the world to slipping in a comically large puddle of vomit. Why does she do this? Because Asians are quiet and weird, and Pitch Perfect doesn't like Asians. Meanwhile, back in Beca's dorm, her hostile Korean roommate invites three of her Korean friends over so they can talk in Korean and play lots of videogames with 3-D glasses on because, man, Pitch Perfect fucking hates Asians.

I'm not even mentioning -- OK, well now I am -- that Beca has a love interest, SENSITIVE WHITE GUY Jesse (Skylar Astin), who's a fan of The Breakfast Club and who sings with The Bellas' bitter rivals, The Treblemakers, and because Pitch Perfect is also a romantic comedy, it must have a completely manufactured conflict so Jesse can wind up shouting at her "YOU PUT UP ALL THESE WALLS AROUND YOU BECAUSE YOU'RE SCARED TO LET ANYONE KNOW THE REAL YOU!" or something to that effect, which of course leads her to the epiphany that no 18-year-old is an island unto herself, an epiphany that eventually gives her the strength to take The Bellas to the finals because this is also a sports movie. Even Jesse subscribes to this film's othering, as he tells his geeky roommate that he can't "be weird" if he wants to sing with The Treblemakers.


Pitch Perfect exists in a world in which a cappella groups are the most elite factions on campus; naked white girls coerce each other to sing in the shower; jokes are still funny after they're telegraphed, delivered flatly and belabored by explanation; college students skip every class without consequence and meet after hours in drained pools to battle-sing; non-whites, homos and fatties are acceptable targets of ridicule; and whiteness, money and nepotism can carry you on cotton-candy clouds over every obstacle. Gee, it must be nice to live in Mitt Romney's head.

MINORITY REPORT: So, apparently 47% of Americans will always vote with the government no matter what, and 77% of critics will always vote for light entertainment over a film's content any day. Good to know. - Ian "Professor Clumsy" Maddison