Remember Me for All the Wrong Reasons

EXPECTATIONS: I'm already aware of this movie's twist, so its impact might not be as jarring as the filmmakers intended. Still, I'm eager to witness its execution, not to mention the buildup. I foresee a lot of silent staring between lovers, but perhaps I'm being unfair to Robert Pattinson. Though he's got the creepy, brooding leer nailed, this may be his chance to branch out with pouting, slow nodding, cocking his head to one side, and, if we're lucky, even winking.

REALITY: Just before the lights came up and the credits rolled during my screening of Remember Me, I overheard the woman sitting behind me mutter "I hate movies like this." You and me both, sister. Was Remember Me an awful film? In short: yes. However, it wasn't awful in a sloppy Valentine's Day sort of way. No, Remember Me is profoundly awful. Remember Me is the kind of awful that merits being analyzed in film schools so that the future filmmakers of America will know exactly what not to do when trying to elicit an emotional response out of an audience. And get this - it's not even awful until it reaches the very end. 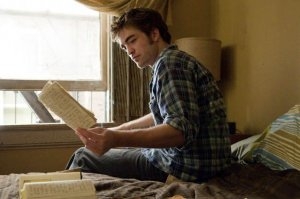 Pattinson can scarcely contain his brooding upon reading the final page of the script.Remember Me is the story of Tyler Hawkins (played by pretty boy extraordinaire Robert Pattinson), college student and son of Charles Hawkins (Pierce Brosnan), a professional businessman who gave up his heart some time ago for wealth and power. Feeling unloved and absent from his father's busy life, Tyler acts out by getting into fights, sleeping around and drinking heavily. His romp through post-teen angst is put to an end when he meets Ally Craig (Emilie de Ravin), fellow pretentious college student. Ally just so happens to be the daughter of hard-ass NYPD detective Neil Craig (Chris Cooper), who serves Tyler a piping hot asswhooping near the start of the film. Tyler and Ally grow as a couple, and as time goes on they find themselves caught up in the tangle of each other's lives, which leads them to help each other strengthen the relationships they have with their estranged families and, ultimately, each other.

Remember Me bides its time drawing you into a well-composed human drama, only to throw a banana peel under your feet with an Andy Kaufman-esque "Fuck you" ending, negating a great deal of respect you had for it. It's not as though the consequences of this event (which will remain unnamed) don't conclude the film's themes nicely; in fact, it achieves its message quite eloquently. The problem is that the plot device they use to wrap up the story is one that comes with way too much baggage on its own, introducing a slew of new ideas that do not conform to the rest of the movie's tone. It's like biting into a tuna sandwich and realizing it's filled with Bavarian cream; it's not necessarily a bad thing, but it's not what you wanted at all. This twist is straight-up schlock. 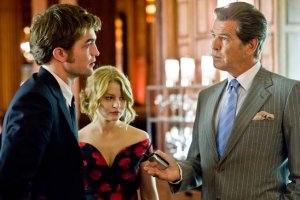 Pierce Brosnan, even after years of handling James Bond gadgets, cannot figure out his tiny cellphone.Thankfully, there's more to this movie than an insulting denouement. For example, the performances in Remember Me aren't too shabby. Brosnan, de Ravin and Cooper all do well in their roles, bringing the correct levels of passion and intensity when the scene calls for it. Mostly they never seem to go overboard with their parts... mostly. Pattinson also gives a good show as the lead, channeling James Dean as a handsome and emotional loner looking for order in his life. He has a bit of trouble hitting the high notes, occasionally confusing quiet thoughtfulness with looking bored and mistaking emotional intensity for being loud and a little obnoxious, but for the most part he does decent work. Yeah, I know. I just gave R-Pattz some props. Probably the best scene in the movie is an emotional confrontation between Pattinson and Brosnan, where Tyler invades his dad's boardroom meeting to create a maelstrom of awkward tension for a litter of corporate stooges.

There's also some chemistry between Tyler and Ally, though it does take a while for them to get the ball rolling. At first they pad the film with idle self-conscious chit chat, like two people who know they're in a romance film. I particularly groaned at the part where Ally is having dinner with Tyler at his apartment and says something along the lines of "Oh look, here's the part where you splash me with water while washing dishes in an effort to show me your more playful side. How quaint." Thankfully, this nonsense is dropped in the second act when the two really start to bond. Once the characters started taking themselves seriously, I found myself feeling a bit more sympathy toward them, and I became interested in watching them help each other rebuild the broken relationships they have with the people around them. Sadly, the melodrama starts to take precedence over the romance as the story progresses, but there's still just enough of Tyler and Ally to keep the film afloat.

Remember Me doesn't merely carry themes of love and happiness like any old romance. It is mired in the kind of philosophical inquiries that might plague confused college kids such as the two main characters. The film essentially addresses the inevitability of chaos in existence, and whether the fulfillment of order in the universe is a human necessity. The idea is presented in a series of letters Tyler writes to his deceased brother, and not so blatantly as to insult the viewer. If that sounds sappy rather than profound, well, it probably is, but it feels natural enough to the character that it seems less emo and more important to Tyler's progression as a human being. However, it tries so hard to hammer home its message that it winds up turning the hammer on itself and committing credibility suicide.

I know it might seem harsh to completely downgrade a film due to one ten-minute sequence, and perhaps you'll be able to overlook Remember Me's horrific faux pas, but I can't see how anyone would leave this film feeling more enlightened by its message than they will be disgusted with its willingness to exploit tragedy to make a point. One thing I can say for certain is that it features the most distasteful finale of any Robert Pattinson movie ever, at least until Breaking Dawn comes out sometime next year.