EXPECTATIONS: It's August 2012. Harold Gorman, Hollywood Foreman, sits in his office looking over the blueprint for the year. He reaches under the collar of his Big Dog polo and rubs dust from his Barbecue Pringles onto his wife-beater. Chewing on a toothpick because his dear sister, Sheila, convinced him to stop smoking, he stares at the numbers before him. "Les'ee here," he mutters. "We got plenty of superhero movies, we got franchise revivals, we're good on remakes." He wipes the sweat from his brow, wondering two things: When are they gonna fix that damn air conditioning? and What are we missing?

Then it occurs to him. He grabs his phone and hits the speed dial. "Hey, Ernie? How we fixed for biopics? No, not presidents, presidents we got. Listen, we need someone generally beloved to play a dead person generally appreciated. Yeah, we can't do an Oscar season without it. And make it... Hollywood-y. What? Hopkins playing Hitchcock? Yeah, yeaaah, that'll work. You're a lifesaver, Ern. Okay, yeah, tell Marie I said hello. Okay, good work." Harold breathes a sigh of relief. He pulls a cigar from his desk and lights it with a match. He smiles and instructs his secretary to hold all his calls as he drifts into a nap. It's Harold's job to make sure movies remain generic. And Harold is very, very, good at his job.

REALITY: If there's one thing Hollywood loves, it's itself. The moviemaking business is filled with stories and legends of the lives of famous people, long before there were TV crews to make reality shows out of semi-famous people. Like most things involving famous people, however, moist of these stories are second and third-hand accounts, and all probable completely fictitious. What's interesting, however, is that for as obsessed as we are about the lives of current celebrities, we don't really give a crap about accurate portrayals of past ones. Like Abraham Lincoln (famed Vampire Hunter) predicted, and as Lisa Simpson discovered in that most cromulent of Simpsons episodes, prefer legend to truth. For example, this biography of legendary filmmaker Alfred Hitchcock comes to us no less than a month after a TV biopic which completely contradicts it. Do we care? No. Because this movie isn't about Alfred Hitchcock, it's about seeing Anthony Hopkins in character as Hitchcock. It's basically watching the man do very good cosplay for ninety minutes. Doesn't that sound fun? 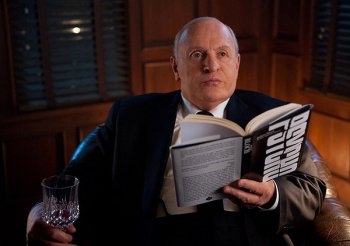 An eery likeness. I don't know who to, but it sure isn't Anthony Hopkins.Hitchcock opens at the premiere of Hitchcock's North by Northwest, when some guy dressed as a reporter asks Hitch if it's time for the aging director to just quit, in what has to be one of the clumsiest line deliveries of the year. Hitchcock responds by looking for his next project, which he finds in the book "Psycho", chronicling the murders of serial killer Ed Gein. With no one willing to bank the production, Hitch is forced to mortgage his house, putting extra strain on his already tedious marriage with his wife, writer/editor Alma Reville (Helen Mirren, the sexiest woman alive.) The film can't decide whether to focus on Hitch and Alma's marriage problems or the making of Psycho, and this basically sets the non-cohesive tone for the entire film. Jessica Biel, Scarlett Johannsan and James D'Arcy show up to play Miles, Leigh, and Perkins, respectively, and that sentence is about as interesting as those roles become.

The flaw here is that with a man as enigmatic as Alfred Hitchcock, there are very few parameters which you have to fill. Like James Bond, you can basically make sure you hit certain points on the checklist, (silhouette, theme music, "Good Evening"), and everything else can be completely fabricated. Unfortunately, this film has no idea how to treat Hitchcock. They hint at Hitch's renowned creepiness and mistreatment of his female cast, but it's played down because the film wants it to be made very clear that Hitch is the hero. It wants so very hard for us to like him, because it wants us to root for him to work out his problems with Alma. It really wants to be seen as a love story, which is hard to do when you portray your main character constantly fantasizing about getting relationship advice from a man who makes curtain strings from human flesh. Yes, that's right, it's a recurring theme that Alfred daydreams about talking to Ed Gein about his marital stresses. 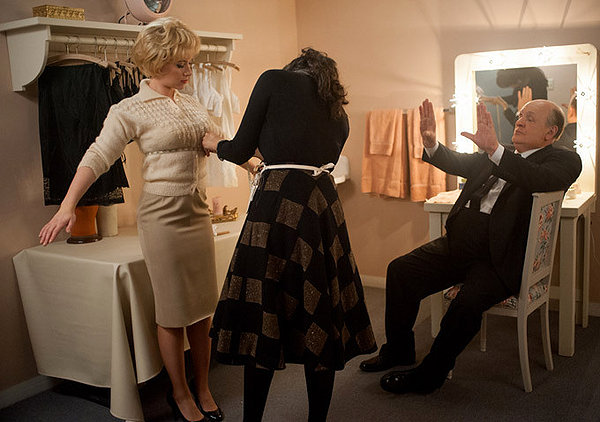 Oh, now this is going places!

Hitchcock employing a serial killer as his mental relationship counselor, like most things about this film, feels like it should work, but doesn't. Contrasted against the other various fairly bland subplots, like Hitch fighting with a censor, or Alma writing with another man, they just feel distant and offputting. They would have been excellent in a film which was aiming to show Hitch's various neuroses and general assholish behaviors, but as is, you've got a series of scenes which just add unneeded confusion to an already tonally schizophrenic film.

What we're left with is a film that's completely empty in rationale. Yes, Anthony Hopkins does a great Hitchcock impression, but that's not really enough to carry an entire film, now is it? Mirren is, of course Helen-Mirren levels of good, but the two are frustratingly unconvincing as a couple. The problem with biopics, is that too often the movie is willing to coast on its central performance without saying anything of substance about its subject. The notable exception here is of course, Lincoln, which went out of its way to make sure you knew what it had to say. I'm not saying I would have liked the film better if it had been a fellatious worship of The Genius Hitchcock making The Great Psycho, but it would have been nice if it made him something more than "A fat old dude who made a movie with his wife."

MINORITY REPORT: Of course, no half-decent biopic is complete without its lower-budget parallel starring Toby Jones. The Girl focused on Hitchcock's relationship with Tippi Hedren (Sienna Miller) during production on The Birds. It's no great shakes, but it does take a stance on Alfred Hitchcock, which is that he was a dirty old perv who resented his loveless marriage. I think that alone makes it the better film and you don't even have to leave your house to see it. - Ian "Professor Clumsy" Maddison