EXPECTATIONS: Since The Texas Chain Saw Massacre earned $30.9 million on an $80,000 budget, becoming one of the most successful horror films of all time, the franchise has engendered three sequels, a remake and a prequel to the remake. And although the latter two films were the best of the follow-ups, and successful in their own right, Platinum Dunes -- the production company responsible for the spate of horror remakes in the past decade -- passed on the opportunity to make a third Texas Chainsaw Massacre, selling the rights to Twisted Pictures and Lions Gate Entertainment for a tub of chocolate frosting and two rolls of toilet paper.

Immediately, the new producers got to work undoing all of Platinum Dunes's success by announcing that, no, this new Texas Chainsaw Massacre will neither continue the previous franchises nor contain the word "massacre" in the title. No, this will be a direct sequel to the first film, almost 40 years later; the studio will bring Adam Marcus, the writer/director of Jason Goes to Hell: The Final Friday, around for rewrites; and, as a bonus, Lions Gate will strip away the franchise's last remaining shred of dignity by presenting the film in 3D.

Kids, that's the story of how we arrived at Texas Chainsaw 3D and how I overdosed on prescription painkillers in the multiplex parking lot -- a preemptive attempt to blot out the badness of a film that I knew would be truly, truly fucking terrible. 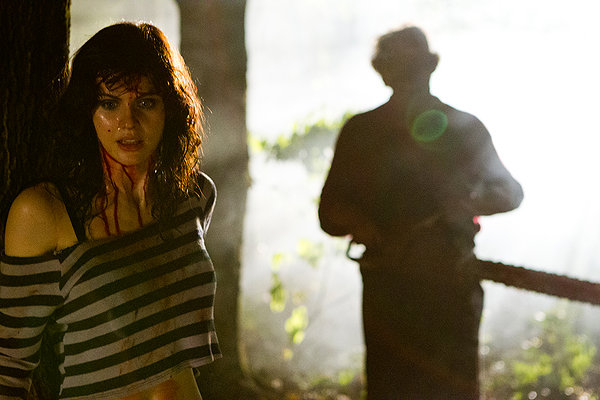 Get comfortable, this is a long review.

REALITY: Variety's Joe Leydon likes Texas Chainsaw 3D, and that's one critic I'll never read again. The Onion's Scott Tobias had the good graces to award Texas Chainsaw 3D a charitable C+, earning a place on my shitlist and, goddamnit, he'd better do something to redeem himself. Yes, Texas Chainsaw 3D is so bad, it has the power to forever shape my opinions of its admirers.

As a horror fan, I've subjected myself to a lot of filmic garbage: the recent remake of Silent Night, Deadly Night, for instance -- which, coincidentally, Variety's Joe Leydon also likes. That film, in which an axe-wielding Santa Claus chases a naked woman from a porno shoot through the snow to a nearby Christmas tree lot, where he proceeds to push her slowly into a wood chipper while the camera can only fixate on her breasts, was an aesthetically energetic monument to misogyny and cruelty. Only slightly better than these exercises in sadism are the horror films that are merely bad, conceived and executed in total incompetence, such as Silent Night, Deadly Night Part 2 or, hell, The Texas Chainsaw Massacre: The Next Generation, which are appreciable for their abysmal quality or gonzo enthusiasm for the bizarre. Then there's Texas Chainsaw 3D, which reaches a whole new level of badness, combining overall incompetence, scenes of unjustifiable cruelty and the assumption that the audience won't give a shit and neither should the filmmakers. 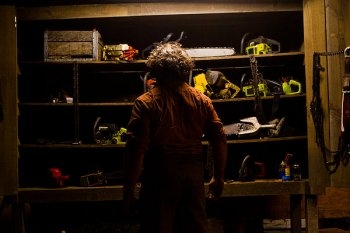 The titular Texas Chainsaw itself. Along with the whole range of Texas Powertools.Despite The Texas Chainsaw Massacre's convoluted franchise history, I could see why scrapping most of the films and returning with a direct sequel to the original film might have been a good idea: If nothing else, the series has been a study in tonal inconsistency, veering wildly between bleak horror, black comedy and enthusiastic weirdness. If either Henkel or Hooper had joined in the effort to make a sequel, it might have even been respectable. But, they didn't, and Texas Chainsaw 3D exists only as a shameless cash-in masquerading as a work of artistic loyalty, a truth that's evident in the first few minutes.

Texas Chainsaw 3D shits on the series chronology by introducing a heretofore-unmentioned mob that burns down the Sawyer house before the police can get inside, thus negating The Texas Chain Saw Massacre's iconic framing scene, in which deputies scour a horror-house for evidence while narrator John Laroquette matter-of-factly introduces the film as a piece of documentary. Against the protests of Sheriff Hooper (Thom Barry) -- who's improbably black, given that this is East Texas in 1973 -- a mob led by Burt Hartman (Paul Rae) burns down the old Sawyer place. Inexplicably, Leatherface escapes while the rest of the Sawyers die in the ensuing shootout ... except for ... wait for it ... A BABY ... which a local couple adopts in secret and raises as their own.

And here comes the galling paradox: Texas Chainsaw 3D fast-forwards from 1973 to 2013, some 40 years, but some characters age at half-speed, others age at quarter-speed and one doesn't seem to age a day. That baby has grown up to be Heather Miller (Alexandra Daddario), a twenty-something who's shocked to learn she inherited a house from a grandmother she never knew she had, and when she arrives in Texas with three friends (Tremaine "Trey Songz" Neverson, Tania Raymonde and Keram Malicki-Sánchez) and a hitchhiker (Shaun Sipos) in tow, Hooper and Hartman have grayed only a little. When Leatherface comes around, he's the same stout, chainsaw-waving madman, despite the fact that he should be collecting Social Security by now.

And then, as Texas Chainsaw 3D wears on, you begin to realize how far the filmmakers have gone in removing all references to the year of the initial massacre -- and, by extension, the initial film. When Heather finds a box marked EVIDENCE at the sheriff's station and it's full of newspaper clippings because police rely solely on newspaper clippings to conduct their investigations, the clippings are carefully cropped to exclude the year. What this means is, Texas Chainsaw 3D is a sequel to a film the filmmakers want us to forget -- I may be getting on in years, but have the 1970s finally merged with the 1990s in some vague wave of the near past in the contemporary teen consciousness?

And if Texas Chainsaw 3D's corrosive cloud of idiocy and shoddy exploitation of the third dimension hasn't deterred you from seeing this piece of shit, you should stop reading here because further discussion of Texas Chainsaw 3D's failures will entail spoilers -- and spoilers, as we all know, engender heartbreak among filmgoers. 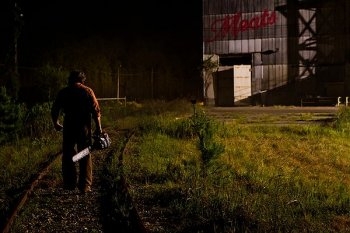 Is that really the safest way to hold that thing?That's really just the tippety-top of the iceberg, but Texas Chainsaw 3D falls hardest in its treatment of women. While previous entries in the series could hardly be called progressive, Texas Chainsaw 3D packs bare flesh into every possible frame while shying away from actual nudity. In a textbook example of the male gaze, Heather's midriff is the focus of a sizable chunk of the film and, once she changes into a button-up workshirt halfway through, she conveniently forgets to wear a bra or fasten any buttons but the one at center-mass because, when running from a chainsaw-wielding maniac, it's important to remember that you may not have time to button your shirt, but you can always double-check that your makeup is prom-perfect. When she's tied up towards the end, her tormentors unfasten even that button, creating a disturbing tension between the amount of breast shown and the threat Leatherface presents in a sequence of shots that serve as the culmination of Texas Chainsaw 3D's twin fetishes for lady-parts and hardware that can chew through the human body.

I guess I shouldn't have expected much from Texas Chainsaw 3D, considering an early attempt to to recreate an iconic shot from the original. What worked in Pearl's cinematography -- the deep contrasts between the red of the shorts, the green of the vegetation, the blue of the sky and the menacing effect of the looming house -- is lost on director John Luessenhop, who packs the frame with two asses and gets so close they compete for dominance, sky and house be damned.

His incompetence surfaces again for the carnival scene, which -- for all its promise of grand guignol carnage on the scale of Piranha 3D or The Collection -- exists without payoff. Leatherface stumbles past hundreds of Texans and, in his single-minded pursuit of Heather, fails to even nick a carnival-goer. Not that I'm pro-carnage, but when you base a series around a villain that's supposed to be the embodiment of indiscriminate evil whose only allegiance is to family, it's a little ironic that he'd pass up scores of victims while chasing his sister. Then again, nothing else about Texas Chainsaw 3D makes any fucking sense, so why should that? Oh, right, because this film takes the unprecedented step of making Leatherface sympathetic, a hero and a tragically misunderstood monster in search of his Dr. Frankenstein even though he likes to dismember his victims slowly while they're hanging off meathooks before he wears their faces as masks.

Yea, I weep for Leatherface as I weep for Current Releases and the shit films we'll see in 2013.

MINORITY REPORT: What fascinates me about this film is that they dropped the "Massacre" from the title. Surely that's the word that makes it interesting? Without it, this is just a film about a chainsaw... in Texas. The best part is that the early trailers apparently played this up, showing us a group of young people arriving at an old house and someone picking up a chainsaw. He's probably just going to show it to them, there's no reason to believe anything bad will come of it. - Ian "Professor Clumsy" Maddson