My Immolated Be-gloved, How They Have Ruined Ye.

EXPECTATIONS: With the success of The Texas Chainsaw Massacre and Friday the 13th remakes, A Nightmare on Elm Street should be a stylish, scary blend of what worked in Wes Craven's original and some new material to replace what didn't (namely, the ending). With a budget of $28 million, the CGI they can afford should give us some interesting and unique dreamworld settings; and with Jackie Earle Haley and the promise of a return to Scary Freddy, after the Jokester Freddy that populated Nightmares 2-7, this should be the scariest Nightmare yet.

REALITY: A Nightmare on Elm Street isn't a reboot; it's a regurgitation.

Oh my God! How deep is your bath?This column sees a lot of hyperbole -- it's in the nature of comedy writing to exaggerate to humorous effect -- but, hyperbole aside, A Nightmare on Elm Street is somewhere between Did You Hear About the Morgans? and The Back-Up Plan on the list of effective horror movies. It's about the worst way to spend $9, and I assume the only reason it wasn't converted to 3-D in post-production was someone on the production staff had a conscience and realized that getting any money whatsoever for this piece of shit was like catching pennies from heaven, let alone an extra $3 for 3-D presentation. All of this is fine by me because, if you think about it, I got to see A Nightmare on Elm Street in 4-D for no added charge; unfortunately, A Nightmare on Elm Street's movement through the fourth dimension is painfully slow, and dimensions one and two were about as fulfilling as dimensions get.

It's hard to understand how such a thing happened. Platinum Dunes -- the production company responsible for many of the recent horror reboots -- has access to Michael "Boom-Boom" Bay and his seemingly endless coffers. The original Nightmare was long on imagination but short on means to fully realize its ideas; such was the nature of low budgets and practical effects. With Platinum Dunes and a dedicated CGI team, director Samuel Bayer had the means to realize whole worlds, let alone a handful of slasher set pieces. As hard as it is to believe, the 2010 Nightmare aspires to do significantly less than its namesake, and accomplishes only a fraction of that.

In a crafty take on the Pied Piper of Hamelin legend (which is name-checked and explained in the film), alleged child molester Freddy Krueger is hunted and burned alive by the parents of his alleged victims. Somehow -- a big somehow, which might have been explained somewhere in the first eight movies, although I doubt it -- Freddy has found his way into the dreams of his alleged victims, who are all in high school despite nearing 30. There, he torments them and eventually kills them, and since these adults -- I mean, teenagers -- have seen The Matrix, it doesn't take them long to figure out the key: Die in The Matrix, die in real life. Unfortunately, these former waiters who by some miracle of God have landed a part in a mainstream Hollywood movie -- I mean, high-schoolers -- haven't seen a Nightmare on Elm Street movie, which sucks for them and doubly sucks for the audience as they spend half the movie trying to get their parents to 'fess up to barbecuing Freddy.

You really don't want to hear those nails on the blackboard.

The problem with the original lies in its ending (SPOILERS AHEAD): Nancy drags Freddy into the real world, does some voodoo high-school shit and he's banished to...Hell? A dreamworld from which he can't torment Nancy or her friends? And what's with that last shot, of Freddy achieving one last surprise kill? Wes Craven was more of an idea man than an ending man, so screenwriters like Wesley Strick, who, once upon a time, wrote big-name Hollywood flicks, and Eric Heisserer, who's been entrusted with Final Destination 5 and a remake of The Thing, should be able to take stock of what worked and what didn't when rewriting A Nightmare on Elm Street. Surprise, surprise, the details have changed, but the broad strokes remain the same. Nancy still brings Freddy into the real world, where she kills him, and there's still that nonsensical last shot. I know applying logic to this movie is a futile task, but: What good is killing Freddy in the real world? Their parents already did that once, and look how well that turned out. Furthermore, are those Last Kills supposed to be real or a figment of a character's imagination? Did anyone involved in this abortion put down the coke straw long enough to ask themselves the tough questions? (END OF SPOILERS) 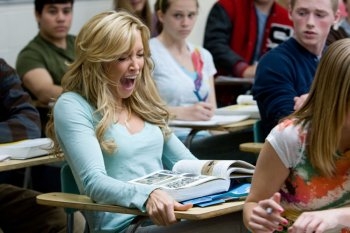 I'll have what she's having.This remake's failures are so numerous, it's hard to know where to pin the blame. Bayer's predictable direction is certainly a glaring fault. He crafts near-precise recreations of the images and moods from the original (and at least one of its sequels) without capturing any of the surreal menace. Jackie Earle Haley, a gifted actor elsewhere, rehashes his Rorschach sneer from Watchmen, an affectation that betrays the absolutely lame one-liners screenwriters coughed up (ho ho ho, a "wet dream" joke while his prey is swimming in blood!). Rooney Mara essays a Nancy who mumbles and slurs so much I'm surprised they let her into normal-kid high school. A gaggle of other young actors wander into the film long enough to get killed, but I'll be damned if I could match character name to face less than an hour after the credits rolled. The score consists entirely of some retard yelling "ALL INSTRUMENTS GO!" to a string quartet whenever something moves on screen. And the editing ... God, when did a trip across a small town take 30 minutes of screen time and necessitate pit stops at the pharmacy and the hospital? I thought producers hired editors to speed things along, but Glen Scantlebury seems hellbent on ensuring every boring fucking minute detail of their five-mile odyssey makes it into the final cut.

A shame, really: Up until now -- and The Hitcher aside -- I've generally liked what Platinum Dunes has remade. The Amityville Horror tapped into an undercurrent of dark comedy that actually worked; The Texas Chainsaw Massacre amped up the nihilistic brutality so much, it played more like an actual horror film than a horror film that's fun to watch; and Friday the 13th made Jason smarter while retaining every last shred of camp (no pun intended) that made the original series a favorite among horror fans. I'm not so attached to the original Nightmare series that I dislike this movie in comparison; simply put, it fails pretty handily on its own.

(The ads attached to A Nightmare on Elm Street consisted primarily of trailers for remakes or sequels, a sizable chunk of which are being presented in 3-D. I know no one from Hollywood actually reads this column, instead expecting box office numbers to directly reflect the quality of the output, but I can't urge filmmakers enough: Embarking on a reboot or a remake or a rewhateverthefuckyouwanttocallit provides the unique chance to fix what didn't work the first time around, to realize the premise with state-of-the-art special effects. In the absence of originality, at least expend a little effort on retooling flawed classics. Otherwise, why bother in the first place?)

MINORITY REPORT: Of course, this brings a whole host of fond memories flooding back to me. I recall a time when I worked at a local comprehensive and many of the children went missing. They were later found in my wine cellar; how they got there, completely dismembered and flayed, is completely beyond me. My story also ended with a fire, that started during some confusion connected to bizarre accusations. However, I obviously survived, but I cannot speak for the police officers who happened to be in the school at the time by sheer chance. -Montague "Legally Sane" Smythe