EXPECTATIONS: Mark Wahlberg and I did this very song and dance a year ago, and the results were less than stellar. I hope this isn't becoming a thing for him; starring in rote action thrillers that wind up getting dumped in mid-January. That's why we have people like Jason Statham. This time around, though, we've got Russell Crowe and one of the Hughes brothers in the mix, so I guess anything could happen.

REALITY: I love a good detective story as much as the next guy, which I'm willing to bet is precisely what Allan Hughes said when he signed on to direct Broken City. As far as detective films go, it's a pretty well-polished production. The script, however, is about as generic as you can get without forcing Mark Wahlberg to wear a fedora and punch creeps in the face. And he does some of that in this film anyway. The bottom line is: Broken City is textbook filmmaking, but when has anyone ever read a textbook for the fun of it?

Here's a publicity shot that'll get all the Mark Wahlberg fans interested.

In 2006, NYPD officer Billy Taggart (Wahlberg) is acquitted of shooting a teenager in cold blood. Mayor Hostetler (Russell Crowe) tells him he did the right thing, thanks him for his service, and sends him on his way. Seven years later, it's election season, and the mayor hires Billy as a private detective to find proof that his wife (Catherine Zeta-Jones) is cheating on him. As Billy spies on her, he discovers there's more to this case than he originally thought. Suddenly Billy is caught up in a conspiracy involving the Commissioner (Jeffrey Wright), the mayor's wife, and Jack Valliant (Barry Pepper), the mayor's competitor in the upcoming election.

Don't tell me you haven't heard this story before. The tenacious detective who finds himself in a web of political intrigue and murder is about as old as cinema, but while the right twists and turns can make a film like this unique, Broken City seems content to coast on tired plot contrivances and boring character beats. Even this wouldn't be such a problem if the film took the time to develop things properly. It's hard to tell whether the script is over-written or under-written; while the film blows the big conspiracy long before Billy ever figures it out, it leaves us hanging with subplots that go nowhere and only exist to pad out an already flimsy story.

The conspiracy boils down to a class-warfare narrative, with one side lobbying for the demolition of a major housing project, while the other wants to lower taxes on the people living there. That's about as black-and-white as politics can get, isn't it? While it's pretty obvious to us who's playing what part in all of this, Taggart seems needlessly obtuse. Despite practically having the whole film explained to him in monologue after monologue, at one point Taggart shouts at the Commissioner, "Doesn't anyone in this town speak in complete fucking sentences anymore?!" One has to wonder whether he's being willfully ignorant, or the writers simply don't understand the concept of sentence fragments. 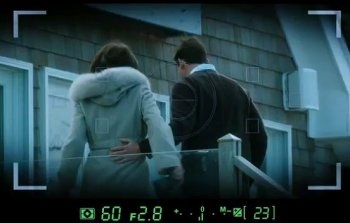 Political intrigue or cuckoldry? You decide.To the cast's credit, everyone does fine work here. Mark Wahlberg once again puts himself on autopilot, while Russell Crowe plays up the mayor as a creepy conservative stereotype with a cuddly demeanor. This is actually one of Crowe's more interesting characters in a while, and it's a shame we don't get to know him better as the film progresses. Then there's Alona Tal, who plays Katy, Taggart's college intern/secretary. They must have wanted Anna Kendrick for this role, because Tal's performance is the most convincing Anna Kendrick impersonation I've ever seen. Once again, hers is a character the film could have spent more time with.

Even the crew behind the camera puts in a decent effort. Broken City is an exceptionally well-photographed film, with some striking views of the New York City skyline and the boroughs Taggart explores are lovingly captured. This is a New York as vibrant as we've ever seen, which makes it all the more disappointing that the final product adds up to so little. Hughes gets some good performances out of his actors, and he clearly knows how to stage the action, but the story never puts the audience in a position to care about any of it.

Ultimately, Broken City is the cinematic equivalent of a vigorous workout. Sure, the filmmakers may have flexed their muscles a bit, they played around with a classic film genre and honed their craft for their next big challenge, but what have they really accomplished here? What this film boils down to is a whole lot of work for very little payoff, and while it's not necessarily a taxing experience for moviegoers, it's not a particularly rewarding one either.

MINORITY REPORT: Mark Wahlberg plays a cop that shoots a teenager? Why would anyone ever do that? I mean, it's not like teenagers ever do things like, oh, I don't know, get high on PCP and attack old Vietnamese men with sharp sticks, leaving them permanently blind in one eye, right Mark? - Martin R. "Vargo" Schneider