EXPECTATIONS: The more research I did into Promised Land, the more intrigued I became. I'm interested to see Matt Damon and Gus Van Sant reunite, now that they're both older and can't blame their lives on their father figures (or lack thereof). I like the idea of John Krasinski being Damon's new collaborative partner, now that Ben Affleck has gone on to bigger and better things. And to top it all off, it comes from a story by Dave Eggers? I'm a white English major, man, I love Dave Eggers! Sign me the hell up!

REALITY: "Bipartisanship" is a word that's thrown around all too often these days, perhaps because it's a lofty goal we all claim that we want to work toward, but no one actually wants to work toward it. Like your New Year's Weight Loss, it's an unrealistic goal that makes us feel better to say we're addressing. At this point, the closest thing this nation has made to a bipartisan effort is "being forced almost at gunpoint to make a last-minute decision to not collapse the nation's economy entirely." And why? Because we like partisanship, or rather we really HATE bipartisanship. We are literally so off-the-rails crazy that it makes us physically angry to imagine not that we might be wrong, but that the other guy might be even slightly right.

I don't want this to be a South Park-esque "truth is in the middle" article, because that's awful, so I'll get to my point: Promised Land, a film that makes no effort to disguise its political agenda, does a pretty good job of being bipartisan by making everyone on every side look like a total jackass. 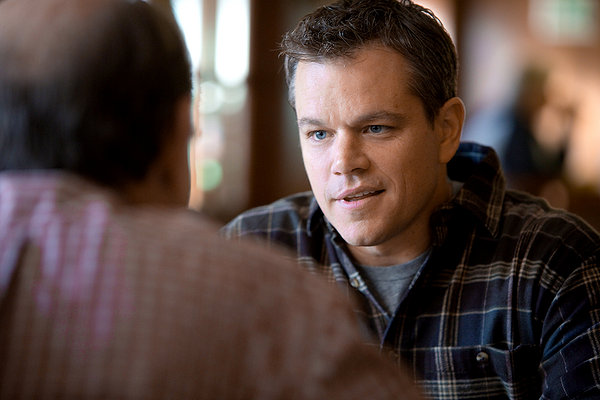 Is this really the right vehicle to cure our recent Matt Damon deficiency?

Promised Land follows Steve Butler (Matt Damon) and his partner Sue Thomason (Frances McDormand), two natural gas representatives who are very good at getting people to sell their land for fracking. (Remember that word if you don't already know it, it's gonna come up a lot.) The pair travels to a tiny Pennsylvania farm town and begins going door-to-door leasing property until they are challenged at a town hall meeting by a local teacher Frank Yates (Hal Holbrook). See, apparently fracking isn't necessarily the safest thing in the world, and sometimes it does things like poison water supplies. Holbrook convinces the town to vote, leaving Scott and Susan stranded in town for three weeks. An environmentalist (John Krasinski) and a love interest (Rosemarie DeWitt) show up to make life more difficult, and Matt Damon does his best impression of Aaron Eckhart's character from Thank You For Smoking without the single character-defining trait of actually being good at his job.

This is the first flaw of the film. We're constantly told how good Steve is at his job, and the first time we see him, he's getting a promotion, but at the first sign of anything out of the ordinary, he completely folds. This is best illustrated during the first conflict with Frank, which puts Steve in front of a fading American flag background, stuttering and stumbling over his words like Jesse Eisenberg in a remake of Patton. I realize this is part of the point, because the movie's not actually interested in showing both sides of the issue, nor did it ever claim it was. However, there would be a great deal more tension if we actually thought for a second Steve was capable of pulling off this trick, or that he actually believed what he was saying.

Interestingly enough, however, his main argument is that the economy is killing small towns and their way of life, and that the people who live in them steadfastly refuse to do anything to stop it. This never stops being true. The film can't offer an alternate solution, and so it doesn't, instead opting for the open-ended Good Will Hunting-esque "slow pan out over the scenery" which is the cinematic equivalent of shrugging your shoulders and saying "Eh, whatcha gonna do?" It's actually aggressively passive aggressive. 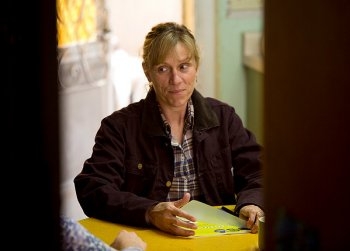 Here we see Frances McDormand symbolically crushed by partisan politics. When will America learn?This is made all the more frustrating by the fact that Promised Land is, on a technical basis only, a "good" movie. Damon's speeches feel natural and heartfelt, his motivations clear and understandable, his chemistry with Krasinski and McDormand entertaining. Danny Elfman's simple but evocative score proves once again that, like most people, he's an interesting artist when not working with Tim Burton.

There's not a whole lot to really condemn the film for, but it's so split that there's no reason to praise it either. I was impressed with the films handling of small-town attitudes, because for the most part it doesn't treat these people like simpletons, nor does it have this weird fetishization of "farm-town good ol' boy" lifestyles that's been pervasive in American entertainment since the friggin' Waltons. This does mean that, during a conflict set in a bar, I'm not really sure who I'm supposed to root for. Do I cheer for Steve, who is technically right but making a huge ass of himself, or for the drunken rednecks who picked a fight with him when he was minding his own business? Oh, gosh, what's a girl to do? I just hate them both so much.

Which brings me back to bipartisanship. This film is quite obviously anti-fracking, and if you don't pick up on it, there are some incredibly heavy-handed metaphors involving a little girl with a lemonade stand to explain it to you. However, by making little half-assed attempts to explain why people might want to sell their homes to natural gas companies, the film technically buys into bipartisanship. But one actually wants to see bipartisanship, because bipartisanship is boring. We might complain about how biased news sources can be, yet there are actually two or three channels dedicated solely to putting a camera in congress and leaving it there, and no one watches those.

To be honest, Promised Land would have been better if it made Steve into someone cartoonishly evil, and/or if it didn't make any attempt to make natural gas companies seem logical. At least then "pee pee doo doo it is a bad method of extracting fuel" wouldn't feel so damn disingenuous.

MINORITY REPORT: The IMDb trivia page for this film should give you some idea of the audience this film is garnering: pedants and grammar nazis. - Ian "Professor Clumsy" Maddison