EXPECTATIONS: Asia's a country, right? I mean, that's what movies have taught me. It's one giant country, and all the people that come from there look the same. Anyone from any part of the continent is interchangeable with anyone else. It's some bizarre combination of Blackface and Whitewashing where none of the people involved are white. (Except Mickey Rooney and Hugo Weaving.) I hope no one has named this before, because I will now: I officially deem it "Buttercupping" after the childhood tradition of rubbing buttercup flowers under your chin to make it glow yellow. (I know that this is supposed to be proof that you like butter, but come on, everyone likes butter, no flower can give conclusive evidence one way or the other on that.) 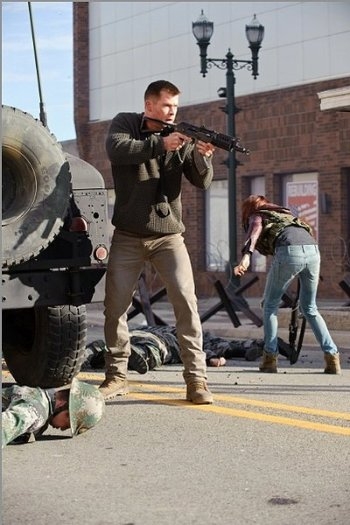 Why does Chris Hemsworth continue to play teenagers? He doesn't even look that young.Now, Buttercupping isn't necessarily a bad thing. I think it's fairly impressive that Erick Avari has played 25 different nationalities, and it was sweet when Japanese actor George Takei gave Korean actor John Cho his blessing to play Sulu. However, the production behind Red Dawn tells one of the worst stories of Buttercupping in film history. See, when this remake was originally planned, and began filming, the evil invading entity was the Chinese army. They shot the movie this way. Then, suddenly they realized that "Hey, maybe it's a bad idea to make a movie that villainizes one of the largest film markets in the world." Then they decided that "Hey, North Korea will never see this movie anyway, let's make them the bad guys." Well, naturally it would require a lot of work to make a huge change like this, right? No. No, apparently all you have to do is change the flags. ...Really? Really, guys? Alright, everyone, let's get our paranoid racism on.

REALITY: I used to think we were living in the Golden Age of Irony. It seems like it, right? I mean, we live in a world where members of the Congressional Science Committee don't believe the big bang happened, women flock to Twitter to protect a convicted woman-beater, and there is a hit television show about the city of Portland, Oregon. It's practically rai-ee-ain on your wedding day, right? Then earlier this week I was coerced unwillingly to watch Liz and Dick, the Lifetime original movie in which Lindsay Lohan plays Elizabeth Taylor. At one point, Lohan-as-Liz chastises the paparazzi for harassing the celebrity couple, then flashes her ass to the cameras, citing the logic of "Let's give them a show." It was at this point that I began to suspect that if irony was not yet dead, it had at the very least been fatally wounded. Then, as I watched the "heroes" of Red Dawn proudly call themselves insurgents, my theory was proven correct: America has both birthed and murdered irony.


Red Dawn is a mostly faithful remake of the 1984 film, with the invading forces being switched from the Soviets to the Not-Chinese. The film sets up its alternate universe by piecing together some news clips and making fake ones, in order to convince us that North Korea is somehow a credible threat. When North Korean troops, with help from Russia for one reason or another, land in America, U.S. Marine Jed Eckert (Chris Hemsworth) and his whiny younger brother Matt (Josh Peck, who we can add to the list of "Actors who were better before losing weight") disappear into the Washington wilderness with a band of actors your sister likes.

The crew names itself "Wolverines, after their high school's mascot. The Wolverines spend the next few days/months/weeks/undetermined amount of time performing training montages in the woods, during which no one in the Korean military thinks "Maybe they might be in the trees." Their supply of weapons, food, ammunition, gasoline, allies, and electricity is never depleted. Ordinarily, I would dismiss these complaints as nitpicks, as I don't care much for debating the realism of movies, because movies aren't real. However, the entire plausibility of this film hinges on convincing the audience that North Korea is powerful enough to invade the United States, a country that spends more money on defense alone than most countries spend on... well, everything. How are we supposed to reconcile that with their occupying forces being too incompetent to look outside? 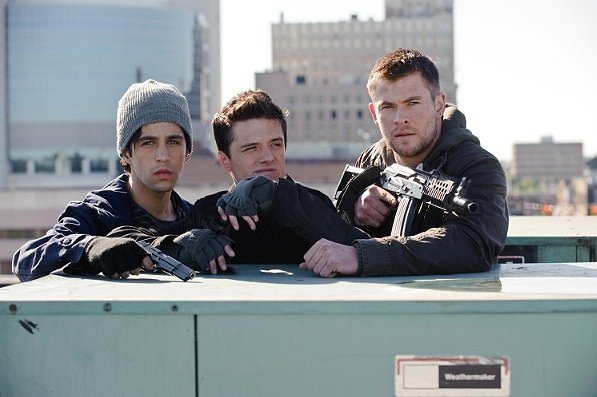 Those Wolverines sure cut an inspiring figure. Where's Hugh Jackman when you need him?

This is where the death of irony I mentioned earlier comes in. Everyone in this movie rallies around the fact that they're fighting on their own turf, fighting for their home and their country. Our Marine delivers a speech directly to the camera about it, apparently unaware that there are a lot of other countries that say the exact same thing about their homes, except that the invading force is either us or someone we support. In fact, the Wolverines proudly describe themselves as insurgents, and they use car bombs as weapons, and they are literal child soldiers. Every horrible thing that we condemn our enemies for doing is presented here as the best, most natural thing ever.

Not only that, but since the Wolverines are apparently able to get automatic weapons delivered to their home base, and Subway still has tasty sandwiches made to order, life in Chinorean-America isn't really all that different from regular America, even without electricity. If I thought for a second this was supposed to be satire, it would be brilliant. But I don't believe it is. It's not even like Taken, where you can argue over its subtext; I think this film is just completely unaware of what it's saying. Unfortunately, the writers and director are all rookies, so there's no past history to point to, but I feel that this film is 100% serious and sincere about its incredibly stupid messages. So, I'll give them credit for their commitment.

Honestly, I somewhat wish Red Dawn was a little more obnoxiously racist, because then I'd have something to talk about. The film is more boring than offensively bad. Credit where it is due, there are several action scenes that are shot very well, and the urban-warfare motif is presented in a very exciting manner. However, these strengths eventually fall to the wayside, and we instead get a steady stream of ShakyCam fights and Gossip Girl-level teen drama.

None of these characters or actors are steady or even charismatic enough to carry such an inane story. Patrick Swayze and Charlie Sheen weren't great actors by any means, but at least they had a little charm in their convictions. By contrast, Josh Peck apparently thinks having a raspy voice means you are acting dramatically. I don't know, maybe it's not his fault. Maybe it's mine for wanting the film to end with he and Hemsworth yelling "HUG ME BROTHA!", because that would have at least been interesting.

MINORITY REPORT: Lately, I've wondered if we at Current Releases are the WOLVERINES!!! and Red Dawn is the kind of invading Other that forces us to go underground, to live like rats and fire back like snipers from abandoned houses -- wait, I've already put way more thought into this than the creative teams behind either Red Dawn ever did. This is why we WOLVERINES!!! will always prevail. -Sean "Keanu Grieves" Hanson