Trouble With the Curve

EXPECTATIONS: The very notion of this film is so formulaic that I had convinced myself that we must have already put out a review of it. Surely we didn't miss this inspirational sports movie the first time around? The plot sounds like a reversal of Moneyball meets every Clint Eastwood vehicle from the past twenty years. The reason for that is because that's exactly what it is.

REALITY: There are two types of inspirational sports movie. There's the underdog-competitor movie like Here Comes the Boom, where everything rides on the performance of one athlete or team who has gotten their first big break, and there's the business-of-sport movie like Any Given Sunday, where the big-money guys come to the realisation that there's more to the sport than the marketability. Trouble With the Curve plays with both ideas without actually focusing on the sport itself. It also manages to do this without it amounting to anything special. 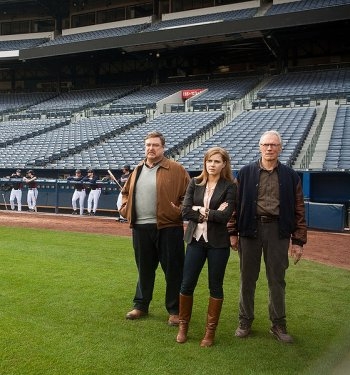 Raise your hand if you care about this movie.Gus Lobell (Clint Eastwood) is a talent scout for the Atlanta Braves and is considered one of the best in the business. Trouble is, though, he's getting ridiculously, ludicrously, very extremely old and his eyesight is failing him. He's on one last job to prove that scouting baseball talent the old-fashioned way is better than using a computer to determine a player's talent, so he goes on a trip to scout out some hot college player. Concerned with his health, his good friend Pete (John Goodman) implores Gus's workaholic daughter Mickey (Amy Adams) to go along with him to help out. Once there, she learns to enjoy life again and takes some time to develop a romantic interest with Johnny (Justin Timberlake) a player-turned-scout who was once one of Gus's projects.

Nobody will be surprised to learn that both the father-daughter and the daughter-boyfriend relationships end up working out as well as possible for all involved. Gus learns to become a better father, Mickey learns to become a better version of her father and Johnny learns to be a better version of Mickey's father. Meanwhile, computer boffin Phil (Matthew Lillard) learns that he should have been more like a version of Mickey's father. Also, certain promising baseball talents learn that in order to become star baseball players they have to be really good at baseball and not just self-important blowhards.

That's essentially what this film is doing: It's asking you to care about something that you've been doing over and over again for far too long. You go through the motions, it works out fine, but wouldn't you rather be doing something else? Wouldn't you rather be a baseball scout? Trouble With the Curve is all very uplifting when it happens, but afterwards you're going to be left feeling bitter about it.

I've said before that formula filmmaking isn't necessarily a bad thing. Just look at the Italian Westerns. The great films that launched the genre (like the ones starring Clint Eastwood) gave way to more curious works like The Big Gundown and Django and then ultimately led to the subversive entries like Django Kill! and The Great Silence. Without the formula, you don't get the gems or the subversions. In this context, Trouble With the Curve is Django Shoots First or Some Dollars For Django: Well made, straight-forward and extremely formulaic.

MINORITY REPORT: It seems like the plot of most Clint Eastwood movies these days is that Clint Eastwood is old. Sure, there's baseball and Justin Timberlake, but they only serve to show us how old Clint is. - Joseph "Jay Dub" Wade