EXPECTATIONS: I have been hoping for a while now that Seth MacFarlane would leave his Family Guy days behind and try something else. The guy clearly has talent, and his creativity deserves to jump to a new medium now that he's thoroughly conquered and laid waste to the land of TV comedy. Ted looks like the right kind of project, but it's a little disconcerting that this seems like the exact same story MacFarlane has been telling for nearly twenty years. An idiot and his money are soon parted. An idiot and his talking pet? Apparently, that's for life.

REALITY: In many ways, Ted is a comedy meticulously designed for the college crowd. The tapestry of crude humor this film weaves is cut from the same cloth that saved Family Guy from cancellation not once, but twice. Seth MacFarlane doesn't shy away from racist, sexist, or culturally insensitive humor, but in his first feature, he actually seems to be making a case for why we allow him to get away with it in the first place. As well-executed and hilarious as much of Ted is, it's also a subtle reminder that this brand of juvenile humor can't last forever.

At eight years old, John Bennett receives a teddy bear for Christmas. Because he has no other friends, John wishes that his teddy bear were real. The next morning the wish comes true, and much to the horror of John's parents, Teddy starts walking and talking. Twenty-seven years later, John (Mark Wahlberg) and Ted (voiced by MacFarlane) are still best buddies, though their childlike friendship is wearing thin on John's girlfriend Lori (Mila Kunis). Lori sees that Ted's influence is causing John's life to stagnate, so she offers him an ultimatum: Ted moves out, or Lori leaves. 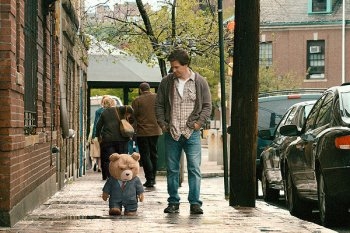 I loved you in A.I!While the star of the film is clearly the film's titular walking, talking teddy bear with a Boston accent, Mark Wahlberg is the real surprise here. Despite acting against the blank stare of a CGI teddy bear, Wahlberg builds a genuine, and often touching, rapport with his costar. We've seen him get silly before in films like The Other Guys, but it's impressive how gleefully he throws himself into this film. During a scene parodying Airplane!, Wahlberg is a dead ringer for Robert Hays, and he plays John exactly the way Hays played Ted Striker: Wholly sincere, yet naively unfazed by all the absurdities surrounding him.

The problem with any comedy like this, though, is that once the actual story gets set in motion, much of the humor falls by the wayside. While Ted has plenty of jokes to keep us laughing for 103 minutes, the film is rounded out by a creepy, Toy Story-esque kidnapping plot featuring Giovanni Ribisi, once again playing villain to Mark Wahlberg's hero. This subplot completely takes over the third act once the film realizes it still has twenty minutes to fill. It's also tonally inconsistent with the entire rest of the film. Whereas the first two acts are filled with MacFarlane's satirical jabs at comedy formulas, the ending is about as serious and straightforward as they come. It almost seems as though MacFarlane and his co-writers didn't know how to make fun of a chase-scene ending, so they didn't even bother trying. In a film filled with smart writing and incisive gags, this is Ted's biggest misstep. 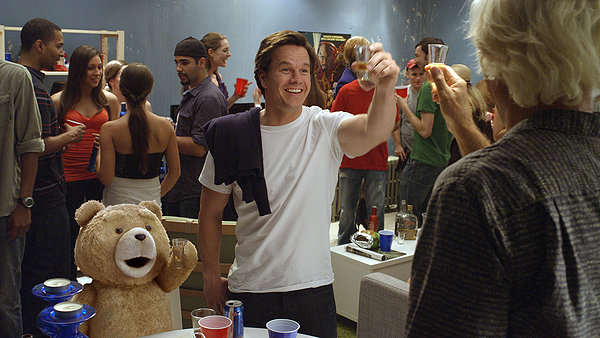 Here's to another season Family Guy!

Despite a very loose plot, Ted does make some fairly astute observations about John and Ted's arrested development. The emotional high point of the film takes place after a party at Ted's new apartment, where Flash Gordon star Sam Jones shows up and all hell breaks loose. When John accuses Ted of being irresponsible, Ted quickly replies that he doesn't have any responsibilities because he's just a magical talking teddy bear. Ted doesn't have a life the way you and I know it; John does. John has a job to keep and a relationship to maintain, because he's an adult and that's what adults do after leaving childish things behind. Ted, on the other hand, is the living embodiment of childish things, and he knows that. It's refreshing for once to see a film take a child's relationship with a talking animal out to its natural conclusion. Ultimately, the film comes around to the idea that childish things don't have to be left behind, but they certainly shouldn't be allowed to control our futures. It will be interesting to see whether Seth MacFarlane heeds this advice himself if he makes another film.

The heart of the film, the relationship between John and Ted, is very well-conceived, and manages to strike an emotionally resonant note here and there. Occupying the fringes of the film are a number of characters every bit as broken as John, whose lives might have benefited from the influence of their own magical pot-smoking teddy bear. Joel McHale, Matt Walsh, and Tom Skerritt are just a few of the film's bit players, and each performance hides an underlying sense of despair. (Incidentally, Tom Skerritt's one line in the film is both the funniest and darkest.) Despite being full-grown men with presumably no magical friends prolonging their childhoods, the film paints these men as even worse off than John. Ted notes at one point that "America is imploding," and while he's merely talking about awful fruit-flavored beers, one can never escape the feeling that Seth MacFarlane is pointing at us and telling us it's our own damn faults for not being more whimsical.

MINORITY REPORT: And now a special sneak peek at the next season of Family Guy:
"Hey Brian, remember that time I was a talking teddy bear?"
*Family Guy plays every Snuggle-Brand Fabric Softener commercial ever made for the next ten minutes.*
"Yeah, that was funny, right? Ladies and gentlemen, Mister Conway Twitty!" - Martin R. "Vargo" Schneider