EXPECTATIONS: William Friedkin possesses a very mixed filmography, but when he's at his best it is impossible to deny that he is one of the most powerful directors of his generation. Early buzz on Killer Joe describes it as nauseating and difficult to watch. Sounds like he's doing something right here.

REALITY: I feel like I have to apologise. I just don't know how well equipped I am to deal with this one. Killer Joe is a powerful work. It is difficult to say if I liked it, because I feel like this film has forced its way into my house and destroyed everything I ever considered important or morally correct about "family values." Many of you will hate this film, many of you will find it offensive and many of you will wish you'd never watched it. But you should watch it. You need to watch it. It will ruin you forever... if you're a man. 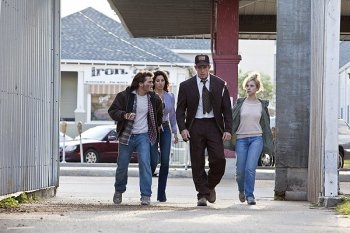 The Smith family...To pay off a loan shark who wants him dead, Chris Smith (Emile Hirsch) convinces his father Ansel (Thomas Haden Church), younger sister Dotti (Juno Temple) and stepmother Sharla (Gina Gershon) to hire a hitman to kill his mother so he can cash in on an insurance policy. Enter "Killer" Joe Cooper (Matthew McConaughey), a police detective who does some professional murdering on the side. He takes the job without an advance payment so he can keep Dotti as a "retainer." He moves in with the Smith family and soon becomes the man of the house.

Killer Joe is a strongly feminist work from screenwriter Tracy Letts, based on his play of the same name. It clearly comes from a very angry place in Letts' mind, attacking the ideas of male dominance, the family dynamic, the objectification of women and the very notion of "ownership" over women (be it parental or marital). It does this not by empowering its female characters, but by holding a mirror up to its despicable male leads. Acts of sexual humiliation, borderline paedophilic perversions and hints of incestuous longing are par for the course in this film.

By highlighting the most common and normalised aspects of misogyny, Killer Joe manages to be extremely relevant. If you spend much time around the internet you'll probably be aware of (or maybe you've even participated in) a plethora of sexist attacks, especially revolving around and originating from the gamer community. That's not to say that Killer Joe has anything specifically to do with games or gamers, but it addresses the mentality behind these incidents in a rather unpleasant way. 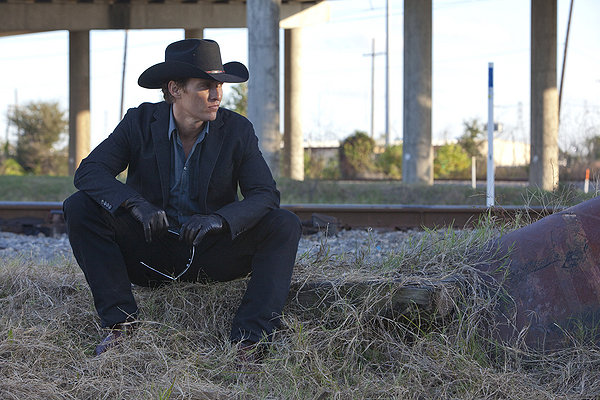 ...and their newest addition.

This is where my earlier apology becomes relevant. I just don't know how well equipped I am to handle this subject matter. Watching this film made me feel like I was being punched in the stomach and kicked in the balls at the same time, and then made to feel like I deserved it. Meanwhile, a pair of ladies sitting in front of me were extremely amused, especially by the ending. I imagine the Men's Rights crowd finding the antics of the male characters delightful and then being deeply angered by the ending instead. Personally, I found it a powerful but not exactly enjoyable experience.

McConaughey is the big talking point: His performance is superb and will probably put him in the race for Best Actor at this year's Academy Awards, though the jury is still out on whether he can content with Michael Fassbender and Liam Neeson, mainly for his apparent reluctance to show his penis on screen (his nude scene contains one of the most awkward back-to-the-camera walks you could imagine). The standout, however, is Juno Temple, who imbues Dotti with a great deal of innocence and certainly some mental problems. There's a strangeness to this character that really helps underline one of the central ideas of the film, that innocence doesn't stand a chance in this world.

It is a comedy of sorts, an extremely dark and grim one that definitely piles on the jokes, but they're the kind of jokes that can be a little hard to hear. Killer Joe says a lot of things that need to be said, and you do need to see this. I just don't know how much you're going to like it.

MINORITY REPORT: So, Killer Joe is a spiritual predeccessor to Magic Mike: Both feature Matthew McConaughey going to great lengths to hide his penis from the camera. Between that and his T. Rex arms, maybe we can put that old "everything's bigger in Texas" thing to rest. - Sean "Keanu Grieves" Hanson