EXPECTATIONS: The marketing and release pattern for this film are completely at odds with each other. The trailers paint it as a lighthearted enjoyable romp that has something for everybody, while the release pattern suggests that somebody high up the food chain doesn't have an awful lot of faith in this thing even with its A-list cast and potentially star-making turn from up-and-comer Rebecca Hall.

REALITY: Lay the Favorite (my British sensibilities require me to spell the title the correct way from here on in) is a film that takes an awfully long time to hit its stride, but when it gets there it's not a bad little character comedy. The problem is that all the stuff we have to endure to get there makes it barely worth the effort.

After her private lap-dancing job goes horribly wrong, Beth (Rebecca Hall) packs up and moves to Las Vegas to start a new life. She soon finds a job assisting professional gambler Dink (Bruce Willis), which causes a rift between him and his wife Tulip (Catherine Zeta-Jones), so she loses the job just as quickly as she got it. She then meets Jeremy (Joshua Jackson) and they move to New York where she starts working illegally for book keeper Rosie (Vince Vaughn). When her new client Dave Grossman (John Carroll Lynch) gets a felony charge and threatens to turn Beth in, everybody bands together to solve the problem. 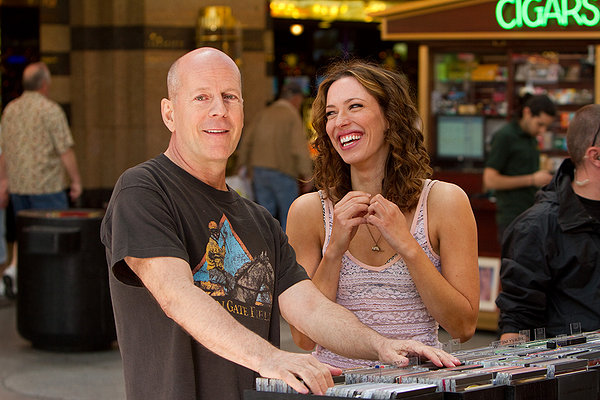 It's the kind of innocuous "power of friendship" message that you come to expect from films like this, but at its best the film is a grounded and believable view of human relationships. Yeah, everybody in this film acts a bit weird and wacky for no apparent reason, but their interactions with each other are just so human. What starts as an ensemble of unlikeable weirdos eventually becomes a group of people who we want to see succeed together.

Someone seems determined to make a movie star of Rebecca Hall, and she definitely shows the talent for it here. The problem is that this really isn't the right role to make a star. Beth is rather an irritating character at times, full of nervous energy, playing with her hair and sniggering. We sympathise with Tulip, who hates this giggling cretin, mainly because she has designs on her husband. Hall's performance is actually superb, chameleonic in fact. It's the kind of performance that deserves awards in the kind of role that would never get nominated. 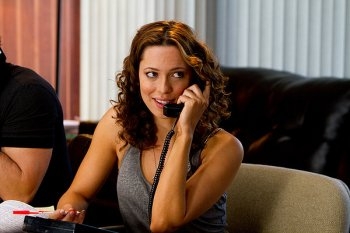 A lead role? I don't care what it is, I'll take it!The ensemble does cracking work throughout. Even Vince Vaughn is a surprise as the camp, outrageous Rosie. Bruce Willis has a melancholy edge to him, especially when dealing with his long-suffering wife. Even the staff of Dink Inc. is made up of respected character actors Wayne Pére and Frank Grillo. The acting absolutely cannot be faulted here; what is at fault is a screenplay that struggles to know where to put these characters until the third act. We really don't need to see Beth lose her job, move to Vegas, get a new job, lose that job, get it back, move to New York and get another job before the plot even starts to move. That's just filler.

There are also a few problematic elements on display here. I cannot fathom, for the life of me, why they decided to aim for the R rating here. Given the light tone of this thing, it baffles me why there are so many arbitrary "fucks" thrown in and even a "cunt" for good luck. They even front-loaded this thing with some nudity for no apparent reason; that might sound odd after my lamenting the lack of McConaughey's penis in Killer Joe, but there's a time and a place for nudity in films and this isn't it.

Another weird and problematic idea is the promotion of cosmetic surgery. I've never been in favour of it myself, but Lay the Favourite seems to be operating under the impression that it completes you as a human being. Angry and frustrated with life? Get a facelift and become mild-mannered and reasonable. It's not only a troubling point of view, it's also another example of pointless filler.

There's a much better film in here somewhere, I'm sure of it. But that's not the film we got and it never will be. Lay the Favourite is just a misfire, an uneven mess with a few bright spots that's not really worth sticking with just for some lighthearted comedy in the third act.

MINORITY REPORT: At this point in his career, I think Bruce Willis has earned the right to play a character named Dink. Fighting terrorists, flying spaceships, blowing up asteroids and starring in a sitcom with Cybill Shepherd builds you a certain amount of respect. It's like whenever Robert De Niro decides to wear a Hawaiian shirt. He's a tough guy, but hey, he can play it cool when he wants. - Joseph "Jay Dub" Wade