EXPECTATIONS: It was 4 a.m. when the phone rang. "Gentleman Loser," the voice on the other end said. There are only a few people in the world who know me by that name and none of them have this number. I took a guess. "JayDubs? Is that you?"

"Of course it's me," he said. "Who else would be calling you from a payphone at four in the morning?"

"Do they even still have payphones?" I asked. He didn't answer. Somewhere I heard sirens.

"You gotta do something for me," he growled. "I need you to review a movie. Think it's called The Best Exotic Marigold Hotel Rwanda for Dogs or some taupe-colored baby-boomer shit like that. You're what, 52?"

"31, but close. Do you mean The Hundred-Foot Journey?"

"Whatever. Don't ask questions. Just get it done and fax it to this number." The sirens grew louder just before the line went dead in my ear.

I didn't have a fax machine, and the only number he left was to the payphone. But he said not to ask questions, so off to the movies I went. 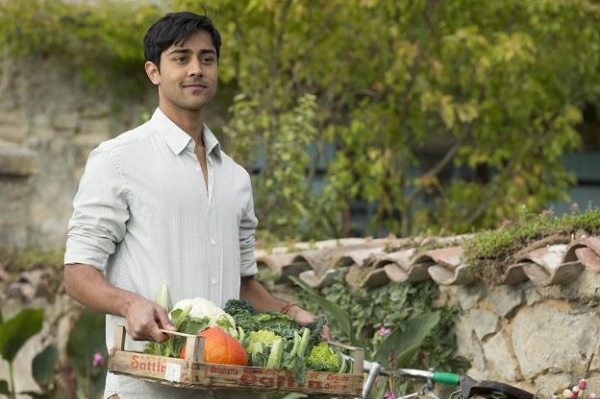 Excuse me, my eyes are up HERE.


Sorry, got carried away there. Anyways, after their Mumbai restaurant burns to the ground, the Kadem family, including Papa (Om Puri) and chef-in-training Hassam (Manish Dayal) moves to an adorable French village with seemingly no cell phones, computers or TVs, after their brakes fail and they almost die. They decide to stay and open Mason Mumbai, an Indian restaurant across the street from a fancy-pants restaurant with no name, run by Madame Mallory (Helen Mirren) and staffed by chef-in-dreaming Marguerite (Charlotte Le Bon, channeling Winona Ryder at her most adorable). Hassam becomes a celebrated, Michelin rated chef, some stuff about food is life and family importance, blah blah blah. This movie might as well have been called The Hundred Food Movie Cliches.

There's nothing really wrong with this movie. It's charming and pretty and there are a lot of pretty shots of lovely food. Everyone wears vintage clothing and rides bikes to the market. I could pick on some class and race issues, but for me, the most problematic aspect was Marguerite. Never mind that she lives in an adorably crumbling apartment and makes bread every day and skips through the woods picking mushrooms. Early in the film, she tells Hassam that she wants to be a chef. She's working her ass off, and then he just waltzes in there and gets the gig because he's just that special. She's mad about this for a few scenes, but then she just accepts that he got what she worked so hard for. Because that's what girls do, right? Just sit back and cheer on our men when they get what we've worked hard for, because they just deserve it, all right? I wanted to dump a pot of hollandaise over his stupid head. 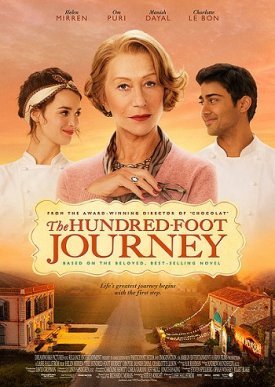 Because "Across the Street" isn't delightfully exotic.The Hundred-Foot Journey doesn't exactly know what to do with its women. Madame Mallory is cold-hearted and cruel until she discovers Hassam and falls in love with Papa. There's a daughter who is told to smile until a guy crashes his bike from her beauty, and then I don't remember her having another speaking line. There are probably cultural arguments to be made here, but the truth is that it was just lazy filmmaking.

But that wasn't why I was angry when I came out of the theater. I was angry because this movie was more of a fantasy than Harry Potter. We all know that Hogwarts isn't real, and as much as some of us nerds might like to live there, it's a completely unattainable desire. But the fantasy that The Hundred-Foot Journey feeds us is one just outside of our grasp. We litter our Pinterest pages with recipes for homemade peasant bread and hand-stamped burlap-draped chalkboards that we are never going to make. We waste workdays daydreaming about artisanal olive oil and then heat up a Lean Cuisine dinner in the microwave and sack out in front of The Big Bang Theory when we get home.

And these movies dangle in front of us the fantasy where we all look cute in vintage dresses and ride bikes everywhere because our days are filled with car horns and text messages and commercials. Movies like The Hundred-Foot Journey either remind us to take time to enjoy life or exploit our conflicting desires to do so, depending on your point of view. For some, movies like this are enough of an antidote, a pat on the back for seeing a fancy, "cultured" film. For others, it makes that Lean Cuisine taste that much worst.

So instead of going to see The Hundred-Foot Journey, I challenge you to actually take the first step. Try a new recipe. Make something on your Pinterest board. Ride your bike somewhere or take that vintage dress out of the closet. Do anything, really, besides wasting your time with these kinds of movies.