REALITY: I honestly doubt Into the Storm is meant to scare anyone, particular since this is a film where a comedian drives the Batmobile into a tornado just to see what happens. That said, I came out of this film thoroughly creeped out. Into the Storm is a film that feels like it could really happen, not because of the flaming tornadoes, but because we now live in a world where every person, vehicle and building comes attached with at least three video cameras. This film feels like it was made by people whose only exposure to any form of cinema came from watching hours of slice-of-life YouTube videos. And that terrifies me. 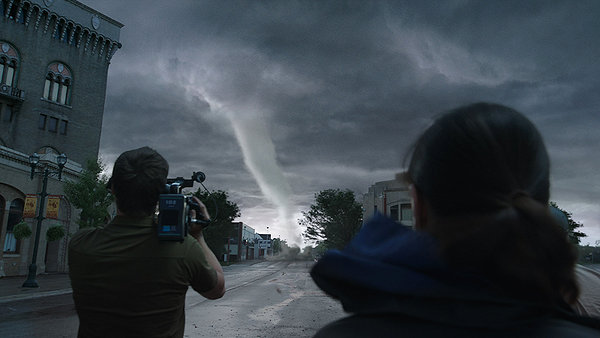 Are you getting this? No? Don't worry, everyone else is.


Into the Storm follows a collection of amateur filmmakers who all converge on the same Midwestern town as a string of killer tornadoes threatens to smear them all against the pavement. Storm chaser Pete (Matt Walsh) hopes to film the inside of a tornado from within his weatherproof battletank. Working alongside him is meteorologist Allison (Sarah Wayne Callies), whose empirical data clashes with his gut instinct. Gary (Richard Armitage) is a high school vice principal who abandons his post to make sure his two sons, Donnie (Max Deacon) and Trey (Nathan Kress), are safe during the storm. While Donnie finds himself trapped in a collapsed paper mill with his dream girl Kaitlyn (Alycia Debnam Carey), Trey has all sorts of fun running around and shooting video of the carnage. Finally, our heroes frequently run into a hillbilly stuntman named Donk (Kyle Davis), who keeps trying to shoot tornadoes with a GoPro camera stuck to his head.

Most of these characters have designs on getting rich and famous by standing around filming these spinning vortexes of death, and the film seems to back them up at every turn. I've never seen so many characters stand so close to a tornado without so much as a tree branch hitting them square in the face. In fact, the film celebrates this journalistic lunacy to such a degree that the one cameraman who isn't at all interested in fame or glory is rewarded with one of the most gruesome deaths I've ever seen in a PG-13 film. Basically, fuck you if you aren't an aspiring YouTube partner. 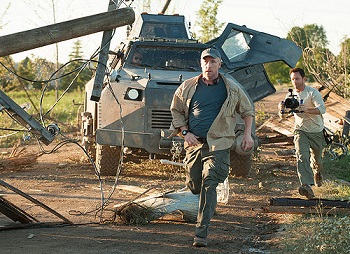 Come with me if you want to die like a punk.Into the Storm is even meandering and plotless like your typical YouTube video. It spends most of the first act establishing all the players in talking head interviews that they appear to have filmed themselves. Then the tornadoes hit, and everyone stands around filming it in the middle of the street, because nobody can ever die this early in a disaster film. Then comes the moment in every YouTube video where you can see the star listlessly staring off into the distance, wondering if there's really a point to anything they're doing. This gives way to a strengthened resolve to soldier through the inanity and come out the other side a hero who totally just did that thing you just watched. Wasn't that awesome? Subscribe! Leave a comment!

It would be easy to compare Into the Storm to Twister if you've never seen Twister. That film is basically Jaws with tornadoes, but Into the Storm makes it look like Oscar-caliber drama. There's no buildup or anticipation to seeing the monster appear, and once the first tornado shows up to wreck Gary's high school, another tornado attacks a different character every five minutes. And when things get too intense for characters to continue filming, we cut to a newsfeed from a helicopter to get that super-wide angle. Or occasionally the film just drops the gimmick and becomes a real movie.

Steven Quale, who also directed one of the better Final Destinations, does his best to make Into the Storm watchable. Even though the found footage gimmick is riddled with cheats, it delivers plenty of carnage, which is all we're really paying to see anyway. It's the script by Josh Swetnam, who also wrote this week's Step Up All In, that ultimately fails. Not everybody wants to be YouTube famous, even if sometimes I say I do. And Josh, if you have a character in a disaster movie explain that a factory is filled with hazardous chemicals, you're doing Anton Chekov a huge disservice by not having a tornado suck up those chemicals and rain them down on everybody. Thumbs down. Dislike.

MINORITY REPORT: Most people will never experience the joy Josh Swetnam must have felt the day two of his movies were released simultaneously. I'm actually kinda happy for him, even if his movies suck. - Sean "Keanu Grieves" Hanson