EXPECTATIONS: Every time we say the word 'anime' around these parts, it brings us nothing but trouble. But this time, things are different. Hayao Miyazaki is one of those filmmakers who has a way of bringing viewers out of the woodwork through name recognition alone. Grown adults with mortgages and 401Ks love Miyazaki, because his films look like anime filtered through the mind of a sensible adult just like themselves. His farewell to cinema, The Wind Rises, promises to be everything your stereotypical anime nerd hates: A slow, painstakingly animated biopic that isn't GIFable and doesn't feature catgirls. Sign me up, bud.

REALITY: From literally any other filmmaker, The Wind Rises would have simply been the biography of Jiro Horikoshi, the man who designed the Mitsubishi A5M, also known as the Japanese Zero. Their film would have likely condemned its protagonist for his active involvement in killing countless people during World War II, and rightfully so. But what sets Miyazaki apart is that he clearly sees much of himself in Horikoshi's story. The Wind Rises, then, becomes a quiet portrait of an artist lamenting that which he helped create. I don't want to come right out and say "Hayao Miyazaki hates anime," but that's kind of hard to deny given the film he just made. 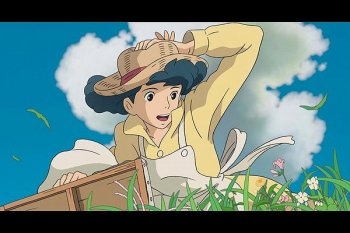 Can't make a joke about this, it's too stunning.As a young boy, Jiro Horikoshi's dream was to fly airplanes. One night, he has a dream about Italian engineer Giovanni Caproni, who tells him that kids with glasses aren't allowed to fly airplanes. After crushing that dream, Caproni says that it's much more exciting to build planes than to fly them. Years later, Jiro enrolls in engineering school and moves up the ranks at a firm designing aircraft for the navy. While vacationing in the country, Jiro meets Naoko, a young lady he had encountered years earlier during a massive earthquake. The two eventually marry, and Jiro's love for his wife comes to inspire his love for designing planes.

To say that the film's plot meanders is like calling the sky blue. There is no traditional narrative, nor any regular antagonists. And yet, The Wind Rises manages to depict the episodic trials of a person's life more thoughtfully than any biopic in recent memory. It helps that its subject is something of an enigma to international audiences. That gives Miyazaki some leeway in telling his story, as does the fact that the whole thing is animated. The film periodically indulges in a bit of poetic imagery before it's forced to get back to the subject at hand. Mostly, that means a lot of paper airplanes taking flight and morphing into real airplanes.

To that effect, the story is punctuated with a handful of dream sequences, in which Caproni checks in with Jiro and offers another nugget of wisdom about the joy of airplanes. Each time, the two climb aboard increasingly absurd aircraft and discuss the philosophy and creation of art. A live-action film could never get away with scenes like these. The bean counters simply wouldn't allow two actors to stand on a fake airplane in front of a green screen and blabber on about how good it feels to create a work of art. Here, though, Miyazaki's film thrives when he gives in to whimsy.

And yet, The Wind Rises seems more infatuated with the master engineer poring over blueprints and schematics than with grand, sweeping tableaus of planes taking flight. As Jiro studies the shape of a fish bone, we can practically see the filmmaker delighting in capturing an artist in his element. Remember, this is a filmmaker who has created some of animation's most fantastical imagery. Catbuses and steampunk castles on four legs are nothing out of the ordinary here. It's almost like we're catching the director just doing his thing on a lunch break. And yet this is still somehow the most emotionally invested I have been at the movies in ages. 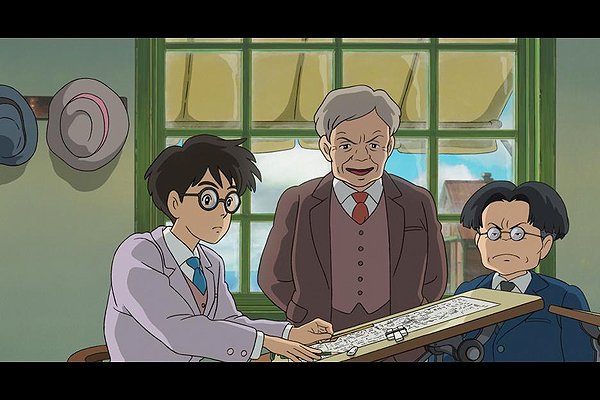 
It's not all sunshine and paper airplanes, though. At one point, Jiro has a nightmare in which he witnesses his planes engaging in war. Bombs detonate all around him, the countryside ablaze in the distance. Jiro has a look of faint horror on his face, but none of this seems to faze him when he awakes. He soldiers on with his work, because even though his planes are used to achieve destructive ends, his first love is designing them and watching them soar. The politics become a bit sticky here, but Miyazaki always keeps his eye on the artist, not his work.

As a man who has watched the artform he helped popularize become both a buzzword and a punchline in the west, Miyazaki must view Jiro Horikoshi as something of a kindred spirit. Whether he feels some kind of nagging resentment over what anime has become is anyone's guess. The way he depicts Jiro in this film, though, I'd wager he definitely has some misgivings about the way popular culture has embraced his work. That's probably the very reason why his swansong deals in real-world politics and everyday relationships. These are the things that truly matter; not just to Hayao Miyazaki, but to each and every one of us.

In the US, The Wind Rises is screening both with subtitles and dubbed in English. So for those of you firmly entrenched on either side of the eternal Subs vs. Dubs War, Studio Ghibli has you covered. Meanwhile, Disney has hired some Grade-A talent to read all the Japanese stuff to us dirty Anglophones. Joseph Gordon-Levitt, Emily Blunt, Stanley Tucci and Werner Herzog headline the English language cast. If you had told me a year ago that I would get to hear Werner Herzog rant about Nazis in a film by Hayao Miyazaki, I'd have politely asked you to stop making fun of me. You know how I get when people mention Herzog.

MINORITY REPORT: One has to wonder just what Horikoshi would make of his designs leading to being the setting of a confused and janky Liam Neeson vehicle. - Ian "Professor Clumsy" Maddison