EXPECTATIONS: Last week, I wrote about the unexplainable locust swarm that is Kevin Hart's 2014 filmography. This week, I'm covering a much blander and whiter, but equally baffling career insurgence: The sudden re-appearance of Kevin Costner in the public eye. This is the comeback no one really asked for, but no one is really opposed to either. Despite being basically box office poison, "The Cost" is still a welcome sight on the big screen for most of us, probably because when Hollywood was handing out public personas, Costner got assigned the role of "okay guy", and being such an okay guy, he took it. Costner may be a comforting presence, but he's far from an exciting one, which is why it's strange that he's trying to take the Luc Besson express into Liam Neeson territory here, because... well, because people actually care about Liam Neeson.

REALITY: I take back everything I said just now, this is a perfect vehicle for Costner, and I can't imagine it working as well with anyone else. I expected a well-styled light thriller from Joseph McGinty Nichol, who I refuse to call "McG." I did not realize it was also also a rather sweet, almost schmaltzy, story about fatherhood and family, which also happens to feature a man being tortured with jumper cables. Since Kevin Costner is basically America's Dad, this seems to work out. 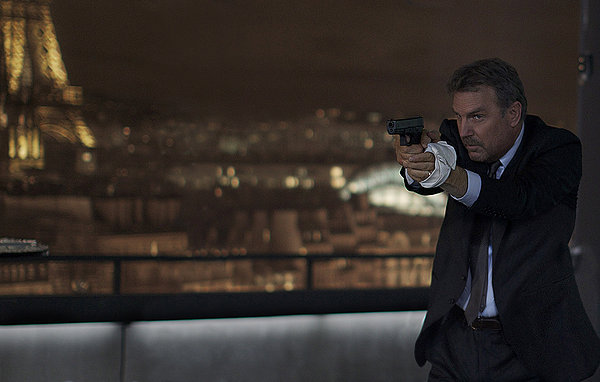 Americans with guns in Europe. It's a bloody scourge.


Costner plays Ethan Renner, a super-creatively named CIA Agent who is diagnosed with terminal cancer following a failed attempt to kill an equally-creatively-named unknown enemy known as The Wolf (Richard Sammel). Preparing for the end of his life, Ethan moves back to Paris (because Luc Besson wrote this movie), and attempts to reunite with his estranged wife Christine (Connie Nielsen) and daughter Zoey (Hailee Steinfeld). When Christine conveniently has to leave the country because plot reasons, Ethan is left with Three Days to Kill& time hanging out with his daughter. He also has a few days to kill The Wolf, because CIA Boss Vivi (Amber Heard) lures him back to the job with the promise of an experimental drug that would extend his life. Vivi evidently can't kill The Wolf herself because Ethan's the only one who knows what he looks like, and Ethan can't just point him out because... because. 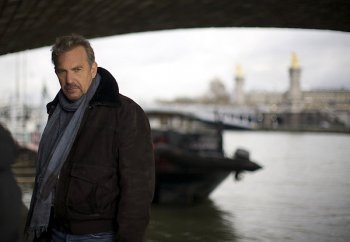 Americans with scarves under bridges. It's a bloody scourge.I'll get my complaints out of the way now, so I can end on a positive note: Amber Heard's character is just& just ridiculous. For about five seconds, you think that she might not be an action star femme fatale using sex as a weapon because of EMPOWERMENT, but of course she becomes that, because that's one of the only three types of women Luc Besson knows how to write. (The other two are Sexually Curious Naive Angry Teen and Leeloo Dallas Multipass) Zoey, of course, plays the SCNAT role here, and she fares far better, as the story is opened up to allow a growing father-daughter interaction. However, while I applaud the film for not going the full-Taken route and having Zoey wind up kidnapped and at the mercy of the bad guys, it still takes a brief terrible turn and puts her in an attempted gang-rape situation so that Ethan can save her, which is immediately glossed over. Four hours later, he's teaching her to ride a bike. As a reminder, last time I watched a Besson movie, we were graced with the Mafia's apparent Wife-Rape rule. The dude has some issues when it comes to women.

The advantage of 3 Days' tonal inconsistency is that there's still plenty to like despite these glaringly obvious issues. To the film's credit, the bang-bang-shooty-shooty-"I don't get Teenagers?" schtick somehow never gets repetitive, and the pacing is kept tight, with plenty of the enjoyably-technically-proficient action scenes McGinty is known for. The film's best moments are filled with Ethan asking (or forcing) the people he is interrogating to help him connect with his daughter. Through this, the minor bad guys are actually given more depth and development than the major ones, and the character interactions allow decent gags which fight off being stale.

3 Days to Kill is a problematic but fun movie that has an unexpected warmth to it when not being bogged down by its screenwriter. Costner's performance is key to this, the film would not be nearly as effective if the man didn't remind us all of a confused Little League coach. The "Dangerous Man/Family Man" territory is something we've seen before, Costner did it himself with Mr. Brooks, but here the emphasis is placed more on the Family bit, which is strangely effective. It borders on melodrama and sentimentality sometimes, but that's okay. I imagine going on multiple killing sprees makes even the strongest person want a hug after a bit.

MINORITY REPORT: I have spent the last three weeks asking "What the fuck is this movie? Where did it come from? Who signed off on this?" Every time I saw the trailer, it would throw me back into a mild existential crisis. The moment you said "Luc Besson," the world finally started making sense again. So thanks for that. - Joseph "Jay Dub" Wade