EXPECTATIONS: In every writing class I've ever taken, there has always been at least one person who tried to write a story about kids who become dead serious about playtime. These stories would inevitably fall apart, either because the writer got too caught up in the gimmick of children swearing at each other during dodgeball, or because the story would collapse under the weight of too much paintball jargon. With this in mind, I'm really hoping I Declare War can offer a unique take on the old "kids being assholes to other kids" chestnut.

REALITY: I Declare War plays off the images of warfare seen in the movies to expose the social minefield known as childhood. While the film gets considerable mileage out of its central gimmick (children firing away at each other with real weapons in fantasy sequences), it's the moments between battles that turn I Declare War into something more than a high-concept student film run amok.

Here's the premise: Two teams of kids play a game of Capture The Flag out in the woods. The rules are simple: 1) You can't move your base. 2) If you get shot, you have to count off ten 'steamboats' before getting back up. 3) If you get hit with a grenade, you're dead. Go home. 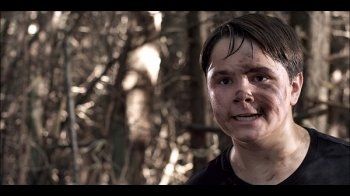 We all remember this kid, don't we? Hint: if you don't, it was you.One side of this conflict is led by General PK (Gage Munroe), a pint-sized army buff with no intention of letting his winning streak come to an end. On the other side is General Skinner (Michael Friend), who enacts a coup against his commanding officer for calling Skinner's brilliant new plan stupid. Skinner captures PK's best friend Kwon (Siam Yu), holding him prisoner while his soldiers lure the enemy to their base. What PK and his troops don't realize, however, is that Skinner has ulterior motives for winning this game.

Through the magic of special effects and a competent prop department, I Declare War imagines this 'harmless' war game waged with gun-shaped sticks and water balloons as a series of battles in which kids in baseball caps and striped T-shirts blast away at each other with automatic weapons, rocket launchers and hand grenades. It's all a fantasy, of course. When a kid gets shot, he simply groans, falls over and plays dead. However, the "water" balloons they throw seem to be filled with Hollywood-grade fake blood, lending each 'death' a creepy sort of authenticity.

It's difficult to describe these characters without giving away the entire film, but what we find is a wide array of childhood archetypes. Frost and Sikorski (Alex Cardillo, Dyson Fyke) are the scrawny/fat kid duo; Wesley (Andy Reid) is the quiet kid who just wants to make some friends; Quinn (Aidan Gouveia) is the pretty boy who seems to have everything figured out; and then there's Jess (Mackenzie Munro), the only girl playing this game, who is told by Skinner that all she's good for is seducing enemy soldiers. Of course, once we get to know her, we discover this isn't the case at all.

Jason Lapeyre's screenplay uses every trick in the book to make us hate Skinner as a character. Not only is he immediately shown to be a conniving villain, but also the film goes on to present him as a sexist, racist, angry fat kid who enjoys torture and absolutely hates losing. With a few years and a couple million dollars, he'll grow up to become the Chris D'Amico character from the Kick-Ass movies. While it starts seeming like overkill after a point, the character still feels authentic. I've known kids like Skinner; kids who say they'll tell the principal you beat them up if you don't hang out with them after school. Some of these characters are entirely too real, and it's to the young cast's credit that they sell them so well. 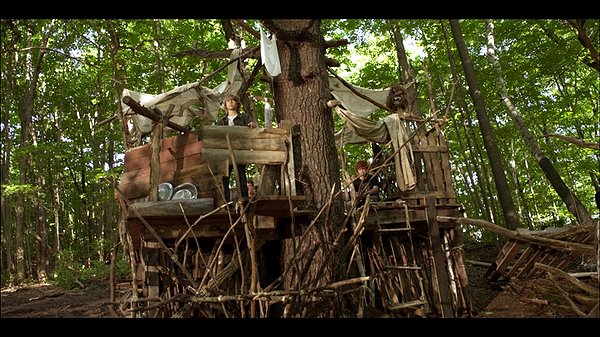 As clubhouses go, mine had a better roof.


This is where I Declare War becomes more than its central conceit. When players start breaking the rules, the facade of the game begins to crumble and real emotions enter the mix. At this point, the film begins to veer into Lord of the Flies territory. It's all fun and games as characters call timeout to go home for juice (isn't 13 a little old for a juice break?), but when the kids bring social status and schoolyard bickering into the mix, the game becomes volatile. When one kid rejects another by saying "You're just no fun to play with," it hurts. That childlike way of putting things cuts right to the core of how we relate to each other, and it is downright scathing.


The forest setting seems to have forced co-directors Jason Lapeyre and Robert Wilson into a corner of sorts, as the film almost exclusively apes Vietnam War films. Most of these kids are just doing what kids do in the woods. PK, on the other hand, sees himself as a character in Platoon or Apocalypse Now. The way he looks at the tall grass or an empty patch of forest, we can tell he's looking for Charlie around every corner. I Declare War even opens with PK and Kwon doing the iconic handshake from Predator, and while neither character winds up in a Schwarzenegger-esque showdown with the enemy, the two almost certainly learn more about themselves during this game than Arnold did when faced with an alien killing machine.

Is it disturbing to see the contrast between kids with sticks running around in the woods and kids firing pistols in each other's faces? Of course it is. Is it troublesome that so many of these kids seem like borderline sociopaths? Yes again. While it's probably a stretch to suggest that most kids are violent little assholes like the ones in this film, it doesn't change the fact that there is something universal in I Declare War''s giddy display of youthful carnage.

MINORITY REPORT: This is basically what every day in the Current Releases office is like. Sean usually declares war on Marty around lunchtime, and the rest of the afternoon consists of everyone poking each other with sticks and arguing about who has a bulletproof force field. It's a wonder any work ever gets done around here. - Ian "Professor Clumsy" Maddison