EXPECTATIONS: Fans of Current Releases know that we're not big fans of the Rotten Tomatoes review-aggregation method of measuring a movie's worth. That said, Getaway is currently sitting at a staggering 2% on the old meter, and that's pretty hard to ignore. Other than the critics who panned it, though, no one seems to know this film exists, or, even if they do, they don't know anything about it other than "Ethan Hawke and Selena Gomez in a car." Well, I like Ethan Hawke, I don't mind Selena Gomez, and I am okay with cars. So I'm setting my bar for mediocrity on this one.

REALITY: Turns out that it's incredibly easy to wring some entertainment out of a movie with a 2% rating on the Tomatometer, and you don't even have to "turn off your brain" to do so! You just have to break with conventional standards of judging movie "quality"; put some thought into contextualizing something that might not appear to merit the reflection; and not be afraid to sound like a pompous ass. In this review, I'll follow all three steps!


Brent Magma (Ethan Hawke) is a former race car driver, and someone has taken his wife. A mysterious voice (Jon Voight) tells him on the phone that if he wants to see her again, he must steal a cool car and do all sorts of ridiculous things with it. Cops chase him, he gets away. Bad guys chase him, he gets away. Selena Gomez shows up and starts asking questions regarding the motives and reasoning of the disembodied voice. Her character doesn't even get a name; she's known only as "The Kid." That's ... that's pretty much it. That's the whole movie. And i'm okay with that.

See, Getaway is basically the perfect video-game adaptation - it's just that it's an adaptation of a game that doesn't actually exist. Brent smashes into stuff in his ridiculously invincible vehicle, causing havoc and increasing his wanted level for no other reason than because a disembodied voice keeps giving him missions. Some of the missions even have time limits. He doesn't care why he's doing this; it's up to The Kid to provide what passes for introspection. All he knows is "if I do enough of these missions, I get my wife back/ beat the game." Here, the voice is the person in charge of the game, the programmer. Earlier this year, the PC game Hotline Miami forced players to contemplate why they enjoyed fictional mayhem. Getaway tries to do the same thing with its viewers, but it's not smart enough to pull it off. 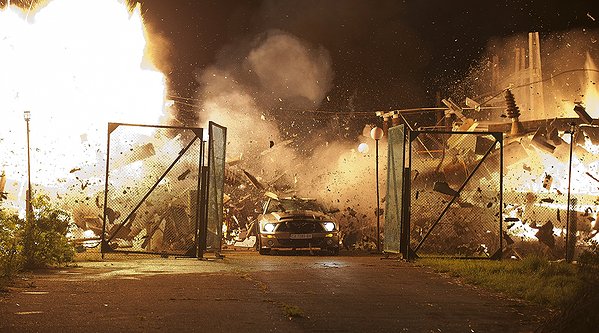 
Most of the apparent problems with this film - the shallow plot, the paper-thin character development, the terrible dialogue - are mitigated when you realize that this film is basically an attempt to recreate that moment in every game where we just decide to break stuff and see what happens. If you need further convincing of this, there's a shot early on where an XBox 360 controller is clearly visible in the driver's side door. There's no reason for it, it's never mentioned or seen again, but it's there as a clue. The camera also flips rapidly from Magma's POV to various overhead shots of the car during driving sequences, just like almost any car-based game allows you to do with one button.

Further, this film comes from director Courtney Solomon, who is best known for making a mediocre movie about another nerd-beloved pastime, Dungeons & Dragons. He boiled that one down to its basic elements as well. (Meaning, he put a dungeon and a dragon in it and called it good.)
Getaway is not a "good" movie by any traditional standard. The plot is stupid, the action is repetitive and the acting is atrocious. (Though in Selena Gomez's defense, not even Meryl Streep could have salvaged these lines.) However, this film isn't really interested in traditional standards, and I'm not interested in judging it by them. So what am I saying? That if we ignore every factor that traditionally goes into assessing movie quality, then Getaway, rated on its own terms as a stunt showcase/game simulation, could be considered "not that bad?" Yes, I suppose. Maybe there's nothing wrong with that.


MINORITY REPORT: The car in this film, the Shelby Super Snake Mustang, is such a rare car that the only way to test-drive it is to pay nine dollars at a movie theater and watch Ethan Hawke test-drive it into a bunch of other vehicles of lesser value. - Joseph "Jay Dub" Wade