EXPECTATIONS: I fear 2013 will be remembered as the year filmmakers declared to the world that they have no idea what they're talking about when it comes to computers, the internet, and this whole "surveillance state" thing. Paranoia and Jobs already rolled back the global technology IQ about twenty points, so here's hoping Closed Circuit will have something a little more intelligent to say on the matter.

REALITY: A legal thriller in the age of cellphones and security cameras is a tricky proposition. These days, there are cameras around almost every corner and in almost every coat pocket, ready to capture incriminating activity and tweet it all over the globe. Now more than ever, plot holes and gaps in logic threaten to torpedo even the tightest of thrillers. That is largely what makes Closed Circuit feel so trite; for as paranoid as it is about the government's clandestine affairs, it certainly whiffs completely on the whole 'intelligence' thing. 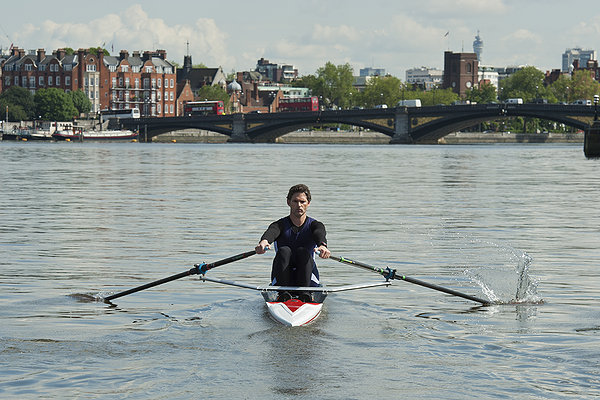 
After a terrorist bombing in a London marketplace leaves 125 people dead, Martin Rose (Eric Bana) prepares for the trial of the century. As the surviving terrorist's court-appointed lawyer, he is paired with Special Advocate Claudia Simmons-Howe (Rebecca Hall), who has private access to the defendant's "secret" evidence that the court doesn't want getting out. As Martin begins investigating the circumstances surrounding the death of the terrorist's first attorney, he and Claudia soon uncover a conspiracy that could damage the British government irreparably and also put their lives in danger.


As mentioned before, Closed Circuit is a remarkably paranoid film. Not only is Martin certain that the government is watching him, but also Jim Broadbent keeps popping up throughout the film specifically to remind him as much. And these scenes are followed up with scenes in which Martin's colleague Devlin (Ciarán Hinds) tells him not to worry so much about the fact that the government is spying on him. "Think happy thoughts," he says casually at the most inopportune moment.

To wit, this film does more in ten minutes to earn the title Paranoia than the actual film Paranoia did. From the title alone, we begin with the assumption that someone is watching these characters' every move. The opening scene presents the terrorist bombing from the vantage point of no less than fifteen security cameras. Outside of this scene, however, the closed-circuit gimmick is incredibly under-utilized. Periodically, we'll see a shot of four security feeds or an incident from four different angles. It's suggested that these are things we're not meant to see, but the film wants us to bear in mind that someone is always watching. 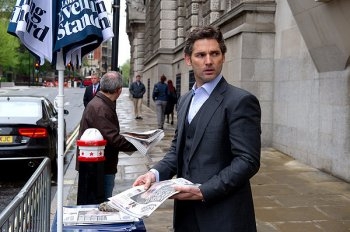 Is someone talking about my new movie back there?Director John Crowley and writer Steven Knight seem to be ... whatever you want to call the British equivalent of 9/11 Truthers. (Clumsy says "Agenda 21 theorists." Let's go with that for now.) This film plays out like the filmmakers watched Loose Change on YouTube and decided to turn that into a John Grisham story. While the conspiracy Martin and Claudia stumble across doesn't involve the melting temperature of steel or the speed at which bananas fly away from an exploding truck, allusions to the 7/7 London bombing are pretty unmistakeable.


Eric Bana and Rebecca Hall are particularly good in this film, making the most of what little material they're given. The two walk around London and hide their paperwork from prying eyes in lieu of doing any real detective work, but where they really shine is in their courtroom scenes. Hall stands up in court and bravely threatens to reveal all the government's secrets; meanwhile, Bana sits back, trembling and waiting for the hammer to finally drop.

The third act brings all the foot chases, fistfights and assassination attempts that you'd expect from a film like this. Outside of a scene in which the terrorist's son evades MI5 agents by short-circuiting his apartment and then jumping out a window, most of the film's action scenes are remarkably toothless. That's not to say a kid outsmarting MI5 is some shining exemplar of action cinema. It's simply the relative highlight in an otherwise sleepy, monotonous thriller.

By the time the credits roll on Closed Circuit, you may find yourself wondering why you just watched a filmmaker accuse the government of doing the things everyone already knows the government does. Even after Martin and Claudia heroically expose the conspiracy to the world, it doesn't seem to do effect any sort of change or even do anybody any good. After a film all about exposing corruption in the face of certain death, the film tries to have a Chinatown moment, and it winds up falling flat on its face.

My recommendation is to just wait for the Julian Assange (Oct. 2013) and Edward Snowden (inevitable) biopics, which should openly address the issues that Closed Circuit just dances around sheepishly.


MINORITY REPORT: Oh good, now we're making these contrived conspiracy thrillers in Britain too. Our government can't even have a parliamentary discussion without everyone cackling like a bunch of school children and patting each other on the backs, how the hell are they going to manage to keep anything like this to plan? - Ian "Professor Clumsy" Maddison