This week, Sean "bad movie knight" Hanson takes a good hard look at Universal's failings as a purveyor of quality direct-to-DVD comedy (is there such a thing?), as well as his own failings as a critic, while the remainder of The Crazy Eights take a much-needed vacation.

American Pie Presents: A Treatise on a Dozen or So Subjects, Give or Take, Presented as an Unfocused Rant

Author's note: I normally don't break the fourth wall, but as a fan of strongly structured film criticism, I must confess that, after agonizing for a good 15 minutes over how to structure a review focused on American Pie Presents The Book of Love that also includes commentary on its three direct-to-DVD predecessors, I came up short. I still couldn't wrap my head around what I'd just seen, let alone criticize it in any kind of ordered manner. So, for those of you who are actually curious if the American Pie Presents... series is worth watching, the answer is: No. Definitely not. As a collective, it's a hideous direct-to-DVD monster of Lovecraftian proportions, overwhelmingly large and indescribable by rational men. For the rest of you, I present American Pie Presents: A Treatise on a Dozen or So Subjects, Give or Take, Presented as an Unfocused Rant. 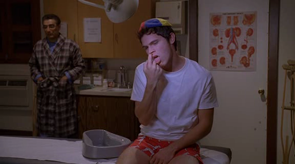 If there is a target audience, this guy is it.

After enduring 393 minutes of direct-to-DVD, loosely related American Pie sequels, I wonder: Who's the target audience?

The first three American Pie sequels, which suffered slightly under the law of diminishing returns, relied on their novelty as teen sex comedies, filling a void that had conspicuously widened since the death of the '80s and the rise of the PG-13 teen sex(less) comedy. Sure, it served up liters of bodily fluids and mountains of titty, but it also had a heart, treating its characters with empathy and providing a moral: One's first time should be spent with someone worth remembering. In the four American Pie Presents... films, those liters have been upped to gallons, the mountains are suspiciously salinated and there's hardly an empathetic character in the bunch. 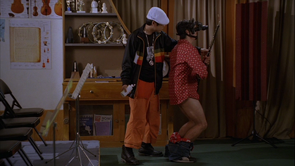 Sodomy is such a terrible crime...how does Universal Studios get away with it?!

An Elaboration on the Initial Query 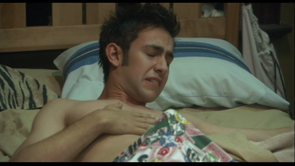 P. much how I felt when the credits rolled on the Pie-a-Thon.

"So Seann William Scott and a Midget Walk Onto a Film Set..."

In fact, the school's memory of Jim far exceeds the world's memory of Jason Biggs, who can probably be found hanging out with his co-stars -- Chris Klein, Shannon Elizabeth, Mena Suvari, that kid from Little Big League, Eddie Kaye Thomas (who the fuck is Eddie Kay Thomas, you ask, and rightfully so) and plastic surgery's best customer, Tara Reid -- and Macaulay Culkin behind the Qwik-N-EZ, selling a weed/oregano blend for coke money. Ironically, Seann William Scott is now the most successful actor of the bunch. The rest started from zero, pushed up to eight (out of 100, mind you) with a role in American Pie and then ended up back at zero. Sadly, anyone who ever set foot on an American Pie Presents... set will remain at zero for the rest of his or her life -- except the lead midget (don't ask) from The Naked Mile and Beta House, who parlayed his role here as a quick-tempered, football-loving, crotch-kicking, ankle-biting little man who eventually gets cuckolded by a Stifler, into a genius comic turn with In Bruges, which is, not insignificantly, 100 times the film any of these movies are. Seann William Scott and a midget: The only success stories Universal can tout among actors involved in an American Pie film. 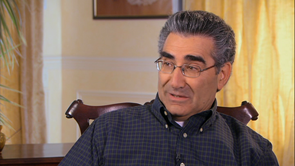 O, how the mighty have fallen!

Levy was a great straight man in the '80s, sharing screen time with John Candy and Rick Moranis (among others) before landing the richly rewarding role of Jim's Dad. Odd how a career high could evolve into a career low, as Jim's Dad goes from being an awkward square trying to do right by his son in the original trilogy to:

Could Noah "Jim's Dad" Levenstein fill this many shoes? Really? Would one have to "take a few personal days" off from the business he owns? Can the man who awkwardly tried to encourage his son's sexual growth with copies of Penthouse, the man who stuttered his way through some of the most humiliating sex talks ever filmed, also be the man of legend, a man who sparked off two notorious campus events at his alma mater after engineering the guidebook that would benefit generations to come? It's a ridiculous sign that Levy is hanging onto the franchise for dear life. At least John Candy and Rick Moranis knew when to get out of the game; Levy's far too old to be taking a part in this ever-growing shitheap of a franchise