EXPECTATIONS: Earth to Echo has had my interest since I first learned of it, which was about two weeks ago because basically no marketing has been done. That shouldn't surprise me, because on paper, this film has basically nothing going for it. A no-name cast and first-time director in the little-utilized genre of "Children's Sci-Fi?" How the hell did this even get made, let alone released in mid-July? Somebody somewhere has to have a lot of faith in this little film, and I am going to figure out why. (If I had to guess, I'd say it's a combination of "extremely poor business sense" and "not owning a friggin' calendar.") 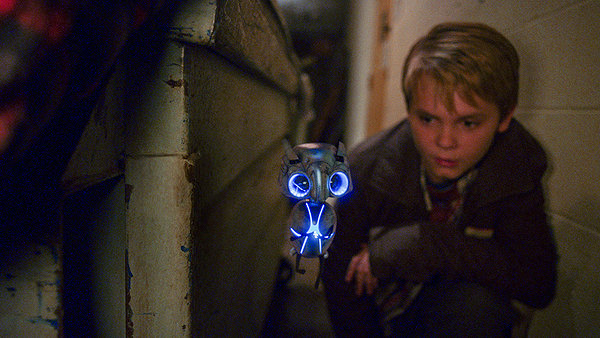 One man's trash is some kid's new robot friend.

Earth to Echo follows a group of young friends who discover a mysterious map and follow it in a desperate attempt to save their neighborhood from its scheduled demolition. On the eve of their scheduled separation, pre-teen best friends Alex (Teo Helm), Tuck (Brian "For Some Stupid Reason I Go By 'Astro'" Bradley), and Munch (Reese Hartwig), sneak away from home and explore the Nevada desert by the maps that have appeared on their phones. They eventually discover a lost and injured alien robot they dub "Echo," who communicates with them through a series of beeps and by transmitting data to their phones in a manner which is never fully explained but no one really cares. Echo sends the boys and the token girl Emma (Ella Wahlestedt) on a scavenger hunt throughout Nevada to find the scattered pieces of its ship, while being pursued by government agents (I guess?) disguised as construction workers, because in this world apparently an orange vest commands more respect than a suit and gun walkie-talkie. If you are keeping track at home the first half-hour of this film is literally The Goonies and the rest is an hour-long version of the bike chase scene from E.T.

So, yes, this film does borrow heavily from other classic family films, as well as more modern sci-fi such as Chronicle and Super 8. This is 100% intentional and I am willing to forgive these derivations if only because they are part of an attempt to return to a time when family programming wasn't afraid to get a little darker. Earth to Echo is a found-footage film, which to my knowledge has never been attempted in a family film, because the entire methodology lends itself to being scary. There are genuinely tense moments in Earth to Echo, which include shaky-cam chase scenes, kids being roughly interrogated, and many of the same camera-breaking techniques that the internet has come to associate with Slenderman. (Please do not stab anyone because of Earth to Echo.)

The film even gives one character their own Blair Witch Project moment, making what he believes to be his last transmission to his friends. It's played very strongly by Reese Hartwig, and it's honestly a little disturbing to see a child realizing that they may be on their way to death. As an adult, you can see the films' obvious ways out, but for kids, this will be an intense moment. Earth to Echo does not pander to its young audience (except for a few lines of "kids talk this way, right?" dialogue), and for that I respect it. 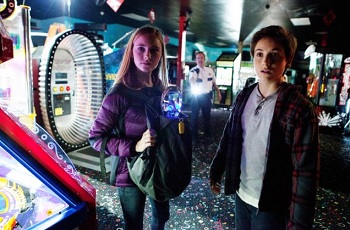 "You damn kids! Quit stealing all the skeeball tickets!"Ultimately, the film is too ambitious for everything it wants to do in its 90-minute runtime. The young actors are all doing fine work for the material they are given, but the primary issue is that the film opens up opportunities for character development and never follows up on them. Emma is introduced fighting with her parents over a country club ball, and foster-kid Alex's fear of being left behind is a primary theme in the movie, but the film is too busy cramming in basically every thought it has to ever make these little threads seem complete. The movie also sells itself to kids on the cute little WALL-E-like alien, but Echo itself has very little screentime, meaning this film will not hold the attention of younger children.

Earth to Echo has only one audience: Nerdy pre-teens and/or nerdy parents. It's a great film for that incredibly niche audience (virtually none of which are Current Releases readers), but that audience is going to be seeing Transformers this weekend. I'm going to make a plea here: If you have a kid between the ages of 8-12, you should probably take them to see Earth to Echo. It is basically "Babby's First Sci-Fi" and I am very happy that exists. Earth to Echo is a "gateway film", a more relatable primer which serves as a fair jump-off point to stronger films. Despite all its flaws, it is a solid, inventive film that I can't imagine anyone reading this will ever watch.

MINORITY REPORT: Earth to Echo is the sole product of Disney suits all standing around a computer, constantly hitting F5 and waiting for kids to think sci-fi is cool again. Sorry, guys. You're not gonna get to make TRON 3 any time soon. - Joseph "Jay Dub" Wade