EXPECTATIONS: This is a movie starring The Beatles. I love The Beatles. I love this movie. I have loved both longer than I can remember. The first bit of music I ever called my own was Beatles for Sale on a cassette that lived in my boombox when I was seven. Virtually every notion I have about this film is leftover from childhood: I remember it being good and funny and full of music I liked. Let's see what I make of it as an adult.

REALITY: Nostalgia often blankets memories of things we loved when we were young, creating a fun illusion that can be mercilessly shattered when you view them as an adult (you betrayed me, Men in Black cartoon).

Fortunately in this case, being an adult with an adult brain has only allowed me to enjoy this movie EVEN MORE. Knowing and understanding the context of this film, on top of having a somewhat more nuanced (usually) appreciation for comedy, makes this film twice as good as I recall. This is a fun comedy with elements of slapstick, and it subtly satirizes the whole "Beatlemania" craze in which these four dudes were swept up. 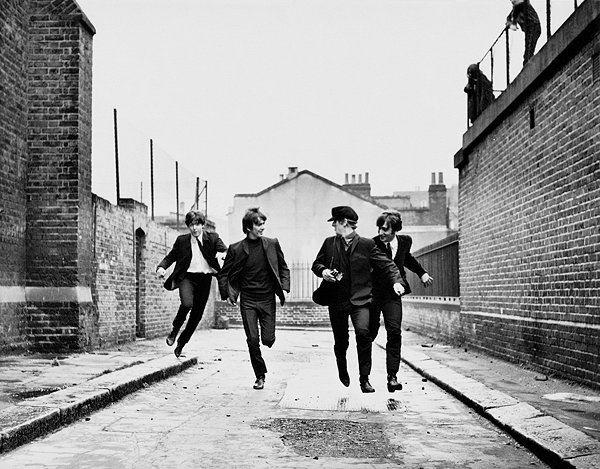 Here we have the Current Releases crew, making a quick getaway after the Deliver Us from Evil/Tammy double feature.

Step into the imaginarium with me for a moment, and I will show you what it is to be a Beatle in 1964. Cast yourself as John, Paul, or George. It doesn't particularly matter which one; you're going to be a smartass with shaggy hair in any case. You and your buddies with your silly Liverpudlian accents are having a jolly old time writing songs. Your drummer, who will likely bang his forehead into a brick wall later, is replaced. Your producer presents you with your new drummer, who goes by Ringo. Yes, Ringo. I'm not making that up.

In what seems like no time at all, you have somehow become one of the most popular musical acts in the entire world, possibly in history, getting yourselves chased from building to building every time you try to do something simple like buy a sandwich or breathe air. It's wonderful, of course; you're making so much money from playing your little guitar that you will never have to worry about money ever again.

It's also terrible, because everywhere you go you are mobbed by screaming fans. You might as well change your name to Mufasa, because you nearly get trampled to death any time you poke your head outside.

I'm being hyperbolic, of course, but realistically the lads from Liverpool were trapped in their fame, their freedom to do things like "leave the house" limited by the outrageous fandom that sprung up around their music, and they were very, acutely aware of it. 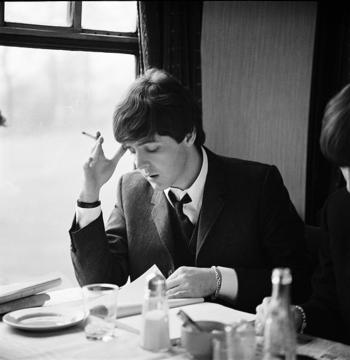 "Scrambled eggs/ Oh my baby, how I love your legs...this just doesn't sound right, John."A Hard Day's Night is a film that is also acutely aware of it. The near trampling I'm talking about there? It's in the movie. The entire film is a semi-documentary of the Beatles just trying to get from point A to point B and perform a show. They try to have some fun in the process, and Paul's grandpa gets up to hijinks. That's it! That's the whole movie. If that premise sounds a bit thin to you, fear not, the movie doesn't crack 90 minutes. It's a simple film that wants to communicate three things in a surprisingly self-aware way: music is great, fun is great, and more subtly, Beatlemania is seriously fucking insane.

You have to remember, during this time, The Beatles were the height of a manufactured pop group, and it was effective. Beatles concerts were full to the brim with people screaming their throats raw and sobbing like someone had just shot their dog. The marketing machine really pushed and encouraged the mad and lucrative frenzy called "Beatlemania" (the film's original title). This movie was made to perpetuate their status and cash in on their monstrous success as THE BEATLES, rock-and-roll music incarnate.

And yet, every scene of shrieking women is juxtaposed with The Beatles looking both pleased and a little bewildered, acting like, say, normal people who have suddenly become the focus of a buttload of attention (hint: that's what they were). Screenwriter Alun Owen spent quality time following the boys around, grabbing things they actually said and sticking them into the screenplay, ensuring that their in-movie personas in some fashion resembled their in-person selves. This comes across loud and clear, as much of the comedy and conflict of the film derives from interactions with their manager Norm (Norman Rossington). Norm, snot-nosed representative of the marketing machine, orders them to do things. The Beatles, four young guys who happen to play instruments, ignore him and do whatever they like, whether it's dancing or running from the police.

There are many subtle moments where the attention surrounding THE BEATLES distracts from the boys as human beings, as when they sneak out of their own press conference, or when a passing woman in a hallway recognizes John. In their brief repartee, she decides John looks nothing like "him" at all. Many of the exchanges in the film follow this pattern; The Beatles as people takes a backseat to THE BEATLES of "Beatlemania." 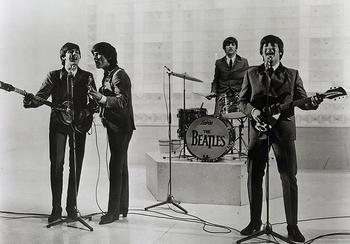 The reissue of A Hard Day's Night contains never-before-seen footage, like this rare still you've totally never seen before.Much of the rest of the comedy centers around Paul's Grandfather (Wilfrid Brambell), an actor who at the time was otherwise known for playing a dirty old man on British television. Grandpa McCartney takes great joy in causing as much trouble as humanly possible and goading others into doing the same. The film is peppered throughout with one-liners and funny exchanges; it's lighthearted and fun.

A Hard Day's Night is an important film, OK? It is rightly considered a major precursor to the modern music video, and it accurately captures the excitement and spirit of the rock and roll of the 1960s. It also acts as a portent of what The Beatles would ultimately do with their music career: surprise the hell out of everyone by taking advantage of their success as a pop group to express themselves as artists (which is really the best anyone could be expected to do after finding they are somebody else's cash cow).

For as much as we glamorize THE BEATLES of Beatlemania even now, this film is special precisely because it doesn't. A Hard Day's Night shows the Beatles as what they really were: four snarky dudes who loved to joke around and make music.

MINORITY REPORT: If you go see A Hard Day's Night this week instead of Snowpiercer, you're part of the problem! - John Q. Filmnerd