EXPECTATIONS: "Jesus Christ the 30 minutes of Tammy I've been watching are some of the least funny and least entertaining 30 minutes of my life. I'm sorry to whoever has to review this for CR." - GonSmithe, 7/2/2014

REALITY: All comedy is subjective. I know that. Some things may seem funny to you that might leave me scratching my head raw, and vice versa. That's fine, different strokes for different folks and all that crap. But then a film like Tammy comes along and makes me wonder if everything I know about comedy is just wrong. Tammy is a film that plays a very insidious game with its audience. If you watch this film, you have two options: laugh at the less fortunate and emotionally damaged, or turn your nose up and refuse to laugh at all the mean-spirited slapstick. Either way, watching Tammy makes you an asshole. 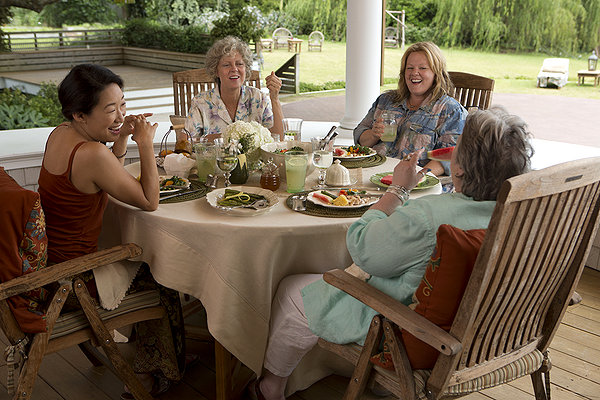 Remember when we starred in good movies? Those were the days...

The film opens in Flyover State, USA, where we meet a disheveled fast food employee named Tammy (Melissa McCarthy) on her way to work. In short order, a deer totals her car, she's fired for showing up late to work, and she comes home to her husband cooking a meal for another woman. With nowhere else to turn, Tammy hits the road with her alcoholic grandmother (Susan Sarandon) to visit Niagara Falls. One binge-drinking montage later, the two find themselves lost in Bumblefuck, Missouri. There, grandma hooks up with fellow elderly drunk Earl (Gary Cole), while Tammy initiates a tame, lifeless courtship with Earl's son, Bobby (Mark Duplass, who keeps showing up and saying things like "yeah, I got bored so I thought I'd stop by").

For whatever reason, the film I keep comparing this to in my head is Tommy Boy. In that film, I understood who the main character was, I knew what his goals were, and his reasons for being an angry piece of shit made sense to me. Tommy Callahan was a big, dumb entitled idiot who suddenly had to step into his father's shoes because if not, then his family's business would collapse. He wasn't necessarily angry, but we had David Spade to fill us in on all of that. The conflict between Dumb Fat Man and Angry Little Boy resulted in comedy, and I'm just as surprised as you that I'm using Tommy Boy as a benchmark for anything. 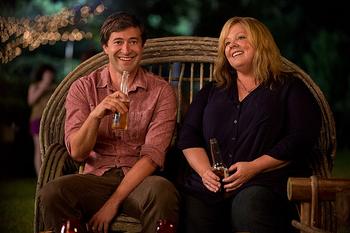 "Mark, I gotta be honest: I really thought we'd get around to adding jokes later."Who is Tammy? What does she want? Why is she so angry? These are the questions I asked myself at the start of the film, and ninety-seven minutes later I had nothing resembling a legitimate answer. Tammy is an out-of-work fry cook who feels sorry for herself because the rest of the world refuses to do it for her. That much I understand. Now, what does she want? To...not be that? To run away and join the circus? To do what, exactly? I don't know. It's never laid out for us. Tammy is more interested in seeing how many things Melissa McCarthy can bounce herself off of than in actually telling us a story about her character.

So then why is she so angry? It can't be because she got fired and then discovered her husband cheating on her. The film makes it clear that Tammy had this general sense of anger building up for a long time before the movie ever began. I remember saying this of the last Melissa McCarthy vehicle I reviewed, and it's starting to feel like a pattern. There's a strong undercurrent of directionless rage in every character she plays, and while she's clearly turning that anger into comedy, the comedy is so broad here that any semblance of character gets completely lost in it. After a while, it just becomes a woman with a bag on her head falling down all over the place. Which I guess is funny if you still watch America's Funniest Home Videos.

If it seems like I'm grasping at straws at this point, it's because there is nothing for me to latch onto in this movie. It's just ninety minutes of actors standing around screaming into the void, hoping a joke will materialize. That void happens to be Middle America, where we're treated to such wonders as Tammy having a fistfight with two kids over a case of beer, an apple pie robbery at a knockoff Jack in the Box, and an all-lesbian Fourth of July party. Actually, through the combined power of Kathy Bates and Sandra Oh, that last one is the film's only redeeming sequence.

I can imagine a version of Tammy in which the title character is sympathetic; empowering, even. That is not the film they made. This version of Tammy is one of the most tame, toothless R-rated comedies in recent memory. I'm not saying this should have been a swear-filled fartfest with a thousand and one sex jokes, but for as angry as the film's title character is, her film seems weirdly terrified of pissing off anyone. That fear all but kills the film's sense of humor, and the result is ninety minutes of laughing at sad people. You asshole.

MINORITY REPORT: Wait, wait, Susan Sarandon is in this? A legitimately hilarious woman? That would almost be enough to get me interested in seeing this. Almost. - Ashley "TwistedLadder" Herald