EXPECTATIONS: Oh look, it's another one of these awful things. I was wondering how long it'd be until the next teen weeper graced moviehouses across the nation. Sources tell me If I Stay is the "Sixth Sense of cancer flicks," only that can't be right, because that sounds an awful lot like that one Nicholas Sparks movie about ghosts. If The Fault in Our Stars is anything to go by, all I can really hope for here is that the two leads have enough chemistry to overcome all the melodramatic tearjerking. Acting saved one film about dying kids this year; let's see if it can save another.

REALITY: Where do I even start? If I Stay is a Twilight Zone episode masquerading as a treacly teen soap opera. It pains me to even say that, because it's an insult to The Twilight Zone, teenagers, and every film student who ever wound up bringing coffee to a producer on the set of General Hospital. This film might be compelling drama for teens, but to anyone who made it out of their high school days with their skin intact, If I Stay is one hundred and six minutes of straight-up torture.

Chloë Grace Moretz plays Mia, a classical music prodigy auditioning for the chance to attend Juilliard. Her boyfriend, Adam (Jamie Blackley), is the toast of the Portland, Oregon music scene, with designs on moving to Seattle to become the next big thing in boring, faceless rock music. The film skips back and forth on a whim, showing us a scratched-up mixtape version of their relationship. We start near the end, jump back to the very beginning, skip to the middle, jump back a couple days... you get the idea. This movie has seen (500) Days of Summer a couple dozen times and gleaned absolutely nothing from it. Moretz was also in that film, so you'd think somebody would have a clue here. 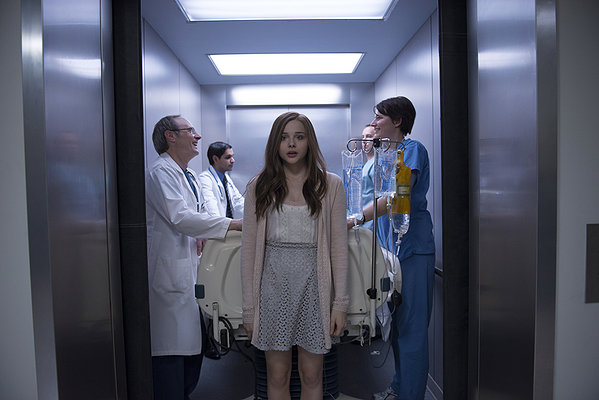 Look how happy the doctors are. This is practically a sitcom!

While all this is going on, we witness the film's real dilemma: A fatal car accident has killed her parents (Mireille Enos and Joshua Leonard) and younger brother, leaving Mia in a coma. On the brink of death, her ghost races back and forth through the hospital, watching in terror as her grandfather (Stacy Keach) grieves and her friends beg Mia to wake up. Should she stay, knowing it means living in a world without her family? Or should she let herself die, leaving behind literally every other thing she has to live for?

If I Stay never really articulates that there's a choice to be made here. It's kind of just assumed by the film's ad campaign. The film carefully constructs its argument for why Mia should live, but when she starts walking toward that bright light anyway, it cures her of Movie Coma Disease by granting her everything she ever wanted. I hope you don't think I just spoiled the ending there, because if you really think Mia would die at the end of a story like this, you might need counselling, because holy shit that would be dark.

R.J. Cutler's film is slavishly dedicated to its flashback-heavy structure, but for seemingly no other reason than that's how the book did it. Everything is presented so flatly that it's honestly hard to tell when things are taking place unless they're happening in a hospital. You could probably recut this film in chronological order and lose absolutely nothing. What use is it to show Mia and Adam breaking up in a flashback at the end of the second act, when we've already seen him racing to be with her in the hospital in the first act? Dramatic tension? What the hell is that? 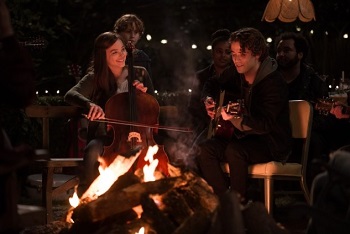 Late in the film, Mia's mom explains that life is one big, tangled up ball of choices. Things happen, and then other things don't happen. One door closes, another one opens. Not only is this heartfelt message something anyone could find in a fortune cookie, it's nowhere close to what any of the rest of the film has actually been about. It inches close to profundity, but instead feels like the film making excuses for itself.

"We know this story is a mess, but it's okay, because life is a mess. That means it's okay for us to show things out of order and with no connective tissue. Live in the moment and stop trying to make everything mean something. Just turn off your brain and cry already! Are you crying yet? No? Geez, fine, have another dead kid. Now weep."

I might have cared about Mia's plight if so much of it weren't so anonymous and rote. If I Stay plays all of its cards in the first half hour, leaving the remainder to constantly smash cut from the romantic to the maudlin and then back again. Right when the acoustic jam band showed up to play a brain-dead cover of the Smashing Pumpkins song "Today," I began to dry heave out of sheer panic as I had finally discovered this film's true purpose. If I Stay is dedicated to taking everything sincere, emotional and exciting in the world and boiling it all down into a gray paste to make milquetoast, suburban white kids feel special.

MINORITY REPORT: Shit, I was actually kinda hoping she died. THANKS FOR RUINING ANOTHER TEEN DRAMA THAT I OTHERWISE WOULD HAVE PAID GOOD MONEY TO SEE, JOE. - Sean "Keanu Grieves" Hanson