When the Game Stands Tall

EXPECTATIONS: First, let me express my extreme displeasure that this is not a movie about West-Coast-rapper-turned-VH1-star The Game, because that is the only way that this stupid title would make any goddamn sense.

Second, coming from the same studio that brought us Fireproof and Courageous, I believe this is the fifth pseudo-religious inspirational film to come out this year, and at least the third one I've had to review. As I've said many times, I don't automatically hate Evangelical Christian films, though I do resent the fact that you guys keep making me watch them. Hell, I kind of liked Heaven Is for Real simply because of how bizarre it is. But none of these films have ever been good, and it's basically because of the handicaps imposed upon them by their audience. When you make your film about people who can do no wrong, you have to have an intense amount of talent to make the film interesting.

Finally, I'm not really sure why anyone would bother to make any more high-school football movies when we live in a world that also has seasons 3-5 of Friday Night Lights in it. 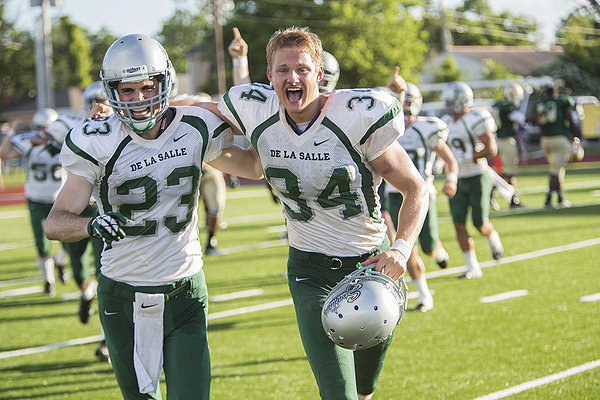 REALITY: When The Game Stands Tall is "inspired by a true story," which in many cases means "some people in real life went to a place and did a thing, here's what it might have looked like." This is why I am so surprised to learn that many of the ridiculously contrived drama points in the film actually did happen, especially since during the film, it really just feels like they're tossing stuff out there to make up for a lack of story.

Here's all that basically happens in When the Game Stands Tall: De La Salle Christian Academy is a real-life high school that won 151 games in a row over the course of 12 years. Then one team came in that was slightly less on point than their predecessors, and they finally lost a game. Then they lost another, and ano... oh no, actually they started winning again after that. So no matter what you do here, no matter how you dress it up or how ridiculous of a title you give it, this is still just the story of a high school football team that happened to lose two games. That's it, and that's not actually that interesting.

The challenge here then is to convince us all somehow that these two minor losses are in any way significant, and to do that When The Game Stands Tall goes way too far in the opposite direction. If there's one thing this film takes seriously, it's literally everything. From the very beginning, we are treated to one dramatic hushed-tones monologue after another, followed by clichés and drama points that make no impact on anyone in the movie or in the audience. It's actually exhausting to watch as the film spends the entire first act trying to convince you how hard it is to live the life of a legendary football champion. Here's a list of everything that happens in the first thirty minutes of the film alone: 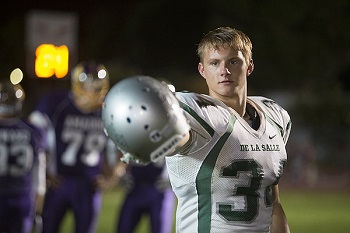 Aren't you gonna need that later?

This all happens before they actually lose the game that's supposed to be the plot of this whole movie, by the way. In fact, most of it happens during the offseason, most of these characters aren't even on the team for half the movie. And some of it, like the heart attack and the shooting did apparently happen, but in the film, they just appear to be crammed in there as excuses, reasons why this otherwise-perfect team stumbled ever-so-slightly. It's a combination of that and "God was testing us to bring us together!" which is frankly more than a little bit of a cop-out. At best, you're saying that the worst result of a kid being murdered in the street directly before college is that his friends may lose a few football games, as was the will of the Lord, and that's just insulting.

None of this matters in the longer run of the film. Literally nothing that is brought up in the first 40 minutes of the film is referred to once the new team of seniors loses their first game, then it becomes all about them. Of the five bullet points I listed, only one is developed any further. Afterward, it's just about making this team perform as a team, because a team of brothers in what you need in the team on the game of life team team brothers team life team Jesus. How can this group of slightly different young men ever perform well together? They will do it with, I am not fucking kidding here, inspiration from the U.S. Army.

Yes, folks, as if sneaking in references to teenagers taking purity vows and literally casting Jesus as a football coach wasn't enough, When the Game Stands Tall shoots for the AmeriChristian pandering record by stopping the movie in its tracks so that the team can go to a VA hospital and be told by actual wounded veterans how important it is to fight for The Brother Standing Next To You. It makes it seem a little disingenuous that the movie keeps telling its characters "it's only a game" while simultaneously comparing that game to a literal war zone.

I will give When The Game Stands Tall this: It is a very well-made movie from a technical standpoint only, and there is a sequence of about 20-30 minutes inside of it that is near-perfect sports movie cinematography. For the duration of one game, the camerawork is dynamic and exciting, the situation genuinely tense, and the locker room lighting actually achieves the heroic look for Coach Ladouceur that Caviezel spends the whole film trying to capture. That's because this particular sequence is almost completely removed from everything else in the movie, you could (and should) watch it separately, and wouldn't need any background on any of these characters beyond "they are football players, this is a football game."

MINORITY REPORT: Is that what happened to Vic Mackey? He couldn't be a cop anymore so he became a football coach? That would almost make this film worth seeing. Nah, probably wouldn't. - Libby "Gentleman Loser" Cudmore