EXPECTATIONS: There's a very short list of movies released in 2005 that are due for a sequel, and Jarhead ain't on it.

REALITY: Jarhead 2: Field of Fire may go down in history - my version of history, anyway - as the most incongruous sequel ever produced. While watching it, my working theory was that some producer somewhere owns the rights to the Jarhead title and decided to cash in nearly a decade later, but as it turns out, that's not true. This isn't even a James Bond Jr. scenario, where the protagonist here is Anthony Swofford's son or nephew or whatever. As such, how Jarhead 2 even exists is a mystery more exciting than the movie itself. Imagine Braddock as a sequel to Platoon or Showgirls as a sequel to Annie and you can begin to understand just how fucking weird this movie is when it's presented as a sequel to Jarhead. Even the subtitle, which seems to recall the harrowing oil field sequence from the first, makes no sense whatsoever, as Jarhead 2 is set in the hills of Afghanistan and there's very little fire during its 103 minutes. The only connection, I gather, is that both movies are shot in color and are concerned, to varying degrees, with life in the Marines. But this kind of tacky titling tactic was stale in the late '70s, when opportunistic distributors would bill completely unrelated exploitation films as sequels to other, better movies. 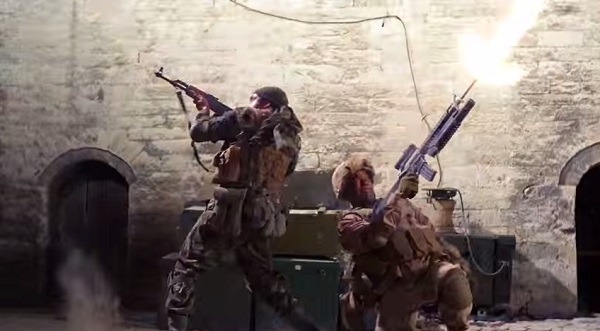 Get some! Get all of it! Get everything!


Cpl. Merrimette (Josh Kelly) is our Swofford-but-not-Swofford this time around. I mean, he's the protagonist, but he's the generic, bland and humorless action hero of the direct-to-VHS military thrillers from which Jarhead 2 takes its cues. He's not a scout sniper, as Swofford was, but a supply NCO tasked with leading a convoy from a big camp in Afghanistan, where Marines wear leis and chug beer because it's Sunday (uhhhh what?), to a remote camp where everyone's been slaughtered by Taliban forces. Sure enough, they run into an ambush (after they remain parked for hours between two cliffs), the Taliban blows up their vehicles and somehow they're reunited with the two survivors of the massacre, a Navy SEAL named Fox (Cole Hauser) and Anoosh (Cassie Layton), a mysterious woman who could be key to winning the war or hearts and minds. The irony, of course, is that a scout sniper would've gone a long way towards getting them out of this jam. But if you're training to be a Marine and you want to know what not to do in any given situation, study Jarhead 2 closely.

What follows is a seemingly endless cycle of chases and shootouts borrowed, with diminishing returns, from last year's Lone Survivor, an infinitely better film as rah-rah love letters to Uncle Sam's warriors go. The colonel from Avatar (Stephen Lang) shows up, this time playing a Marine colonel, as does Bokeem Woodbine, presumably wondering what the fuck he's doing here, but that's about it for talent. Everyone else looks like they were imported from a recruiting video, a model of diversity flashing white-toothed smiles at each other from across the frame. Guess how many non-white Marines live to see the end credits. (Hint: not very many.) The lone woman in the squad only exists to endure her colleagues' incessant sexual harassment with a polite boys-will-be-boys grin. 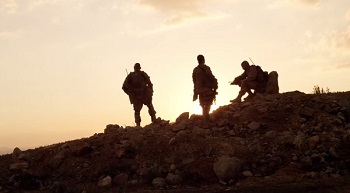 Give away your position, why don't ya?If you're still reading this and you remember Jarhead, you can begin to see why Jarhead 2 is its antithesis. Jarhead was about Marines who see very little action and are broken, in some way or another, by the unfulfilled promise of violence. Conversely, Jarhead 2 is a military fantasy that celebrates its characters for fighting their way through waves of enemies in action sequences choreographed by a 13-year-old after a Call of Duty binge. Jarhead was equally amusing and disturbing, lending it a M*A*S*H-ish vibe, while Jarhead 2 is mostly just boring when you're not laughing at the film's many, many goofs and implausibilities. (Although, to be fair, Jarhead 2 occasionally rises to competence when it's ripping off The Hurt Locker.) Jarhead also pointedly critiqued piggish behavior, while Jarhead 2 gives its men a pass for asking their female cohort - again and again, despite her protests - how she shaves her pubes.

The film redeems itself slightly when it reveals Anoosh's motives - she's a women's rights activist who's scheduled to speak at a United Nations conference - but even then, the men wonder aloud if keeping her alive is worth the effort. Nevermind that the Taliban punished her for going to college by murdering her family in front of her. Nevermind that she's supposed to be a beacon of hope for women caught in an oppressive regime. Because, really, how many dead Marines is one women's rights activist worth anyway, am I right? Composing blood sprays in After Effects is expensive!

Look, to really understand the vast gulf between the films, check out each the closing monologues:

No one would accuse Jarhead of subtlety, but at least it didn't belabor the point. Meanwhile, Jarhead 2 spends a lot of words going nowhere along a road built on the cheap. But once we've endured that maudlin slice of patriotism, of course we're gonna get a slammin' rap single over the end credits, right? After all, Jarhead ended with "Jesus Walks." Nope. Jarhead 2 goes for King JuJu, with a fake DMX shouting "WHAT?!" in the background throughout the entire fucking song. I give up.

MINORITY REPORT: You know how sometimes Turner Classic Movies will have a celebrity guest pick the movies for one night? I remeber the night Donald Trump was on, he chose Citizen Kane as his feature film, and I remember thinking "I have never seen anyone miss the point of a film harder than this." That statement is no longer true. - Martin R. "Vargo" Schneider