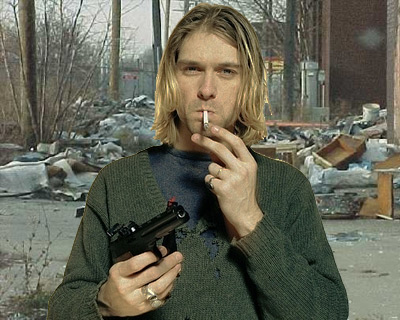 Steve: It's a rainy Chicago afternoon when you arrive at the airport.

Zack: Was Lisa able to smuggle her dynamite and flame thrower on the plane?

Steve: No, she had to leave them behind.

Zack: Not a big deal. I'm pretty sure there's a store that sells dynamite and flame throwers in East Chicago.

Steve: Kurt also had to leave his heroin behind.

Zack: "Ohhhh fuck. Oh fuck. Oh god. E, where's the limousine? I need to find a dealer. Do you know anybody here? Do you know where I can score? You're not holding, are you?"

Steve: Eazy-E is offended. He is West Coast and has no idea how to get drugs in East Chicago. "Do you think all black people know where to get drugs anywhere?"

Steve: You're going to be minus 20% on all skills until you get some heroin.

Zack: I order the limousine driver to take us to the nicest hotel in East Chicago. Maybe a boutique hotel where they have a koi pond in your room and the little soaps are carved with your initials.

Zack: Or something without a dead body in the room when we check in. one of the two.

Steve: The limo drives you to a Holiday Inn that looks like it is from a horror movie. The limousine screeches away as you get your luggage out.

Zack: The effects of this evil entity are being felt. Ronald Reagan, your trickle down lies are a doomsday prophecy for the middle class.